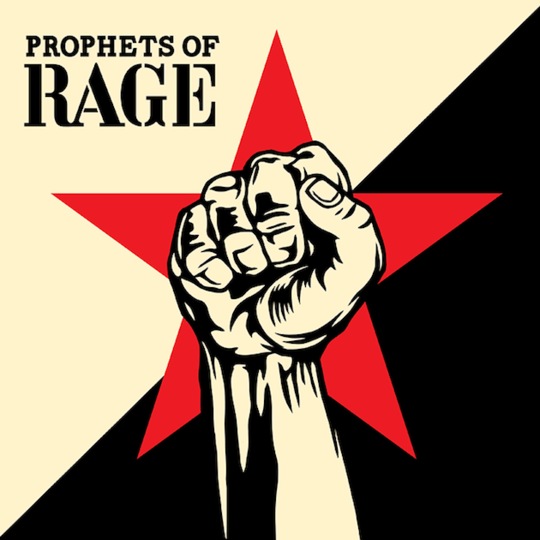 When three-quarters of Rage Against The Machine announced they were uniting with Public Enemy’s Chuck D and Cypress Hill’s B-Real as Prophets of Rage most rock fans had the same reaction: 'Well that’s fucking cool'. It is cool, isn’t it? Comfortably the most successful political agitators in alt-rock meeting the fury of early hip-hop’s most righteous MC is a meaty enough idea. Adding in B-Real – no stranger to slick couplets and serious activism himself – is another layer of cool (along for the ride is late-period PE turntablist DJ Lord, although, being absolutely honest, it’s not massively clear what he’s contributing outside of the live show. But still... cool.) A quickly gained (although, let’s face it, absolutely predicted) reputation as an incredible live act and the announcement that RATM/Audioslave producer Brendan O’Brien would be helming a debut album was cooler still.

This seemed to be about more than ‘cool’ though. Guitarist Tom Morello didn’t put the outfit together to drag a new twist on ‘Killing In The Name’ around the festival circuit. The very existence of this band is a political act, born before Trump’s election and driven by the fury he generates. Morello described the band to Rolling Stone as 'an elite task force of revolutionary musicians determined to confront this mountain of election year bullshit’. That’s not just cool, it’s exciting. Even necessary. And while you might question whether six wealthy rock/hip-hop stars in their forties and fifties can produce a work vital enough inspire people to 'unfuck the world', you can’t fault them for trying.

Whether the rap-rock super-group’s debut passses its 'audition to be the soundtrack for the resistance' (Morello again) remains to be seen, but it feels unlikely. Most audiences hearing Prophets of Rage won’t be inspired in the same way fans of their composite groups were, way back then. RATM, for all their Lollapalooza crossover-appeal, lit a fire with their debut; Public Enemy, even more so. All three bands were unique, unforeseen detonations of their time. Sadly 25 years on from Rage Against The Machine, and nearly 30 from It Takes A Nation Of Millions To Hold Us Back those messages have been weakened by repetition. We KNOW the RATM trio want to smash the system, we know Chuck hates the police and B-Real wants to legalize weed. Even against a backdrop of politicised social activism, this stuff feels like predictable sloganeering, and while fans of all three acts will lap that up; with the best will in the world it’s preaching to the converted. And that’s without getting into the whole subject of a band that charge £50 for a gig ticket and £20 for a fucking baseball cap on their website, encouraging us to kick against the system.

If you separate the ideology from the artefact, then there’s plenty to enjoy here. Prophets Of Rage is never more than the sum of its parts, but that’s okay when those parts function as well as this. The core backline of Morello, bass player Tim Commerford and drummer Brad Wilk have unassailable chemistry as a rhythm section, kicking out head-nodding jams one after another. While ‘Legalize Me’ and ‘Take Me Higher’ fall on the wrong side of the Red Hot Chilli Peppers, ‘Radical Eyes’, ‘Unfuck The World’ and ‘Hands Up’ are fist-in-the-air smashers that would musically have sat comfortably on any RATM record. B-Real’s flow is a seamless fit and contrasts nicely with Chuck’s bulldozer approach. The pair make an unlikely but effective foil for each other. It works,

So yes, the message feels less than vital at a time when vitality is so needed, and no, there will be no revolution off the back of the subversive royalty involved in this release. The slogans feel thin, but the music itself is substantive. Whether that counts as a success or not comes down to what you came here for.