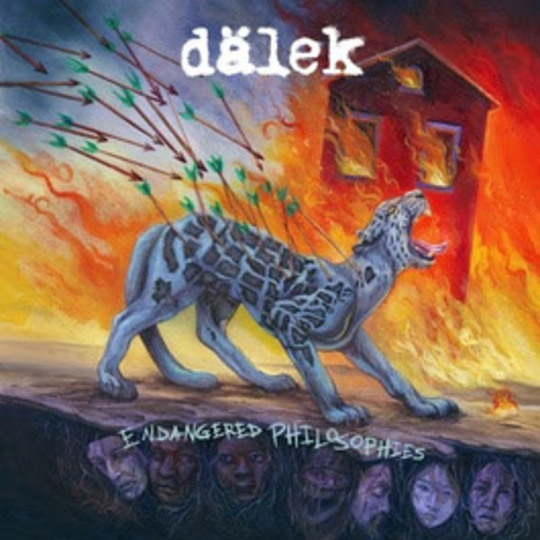 “The future? We defining it! / Status quo? Defying it! / The violated violent / The vilest men corrupt so we refuse to keep silent.”

So spits MC Dälek at the end of Endangered Philosophies opener ‘Echoes Of’. It’s a bold statement from a nearly-20-year-old band only recently emerging from a prologued absence, but if anyone can deliver on such intrepid claims only the brave would bet against Dälek. Ostensibly a hip hop group, they have also found their music likened to shoegaze, metal, industrial and trip hop, consistently sidestepping categorisation, but always producing interesting and unexpected work. Despite a nine-year recording hiatus, 2017 finds these hip hop experimentalists cooking on gas.

Having released their comeback album Asphalt for Eden just last year they’ve wasted no time on a follow-up. They may be in the second decade of their career, but this record finds them on no less determined form. ‘Weapons’ begins with a leisurely beat and languidly layered production that belies the starkness of the message at first, but the slow burn of the track catches up with the warning, “we gain perspective / we’ve all been off message.” That caution turns into resolve to fight the good fight (“there is no surrender / fuck all them trendsetters”) even if there’s no solid instruction of how that might play out.

As far as Dälek’s noise-saturated hip hop goes, that track is as serene as it gets. Elsewhere abrasive looped guitar swamps ‘Echoes Of’, ‘Few Understand’ is lacerated by a persistent background whine, and 'Son of Immigrants' gets battered by metallic waves of sound. The beats may be old-school, but the various other discordant pairings are anything but, and that meeting of classic rhythms and experimental soundscapes keep Dälek on the right side of fresh. Sometimes the rhymes can get lost in the dissonant collages, but in some respects, it just forces the listener to focus more keenly making the experience even more intense.

And it is a fierce, and often unsettling, listening experience throughout, but brutal themes and unrelenting noise are answered with humanity. This isn’t a nihilistic record, merely a deeply concerned one, and it’s the closing track that reflects this most deeply. ‘Numb’ concludes the record in heartbreaking fashion. It may be the most melodic, but it wreaks of sadness, the rhymes are delivered desperately (“This is gonna change you / This is gonna change me.”) and the looping, clashing electronics only heighten the despair.

Perhaps though, the highlight of Endangered Philosophies is ‘Beyond the Madness.’ It conjures musical swirls that stimulate a queasy fair ride - they’ve always been masters of atmospherics - but all the while a small but significant melody works hard in the background. Although their lyrical palette is limited to shades of grey or black, (“Let’s stop pretending this breath is eternal… Existence in peril”) musically they allow themselves variegated freedom that allows glimmers of light in the dark night. For all its bleakness Endangered Philosophies is also strangely beautiful.