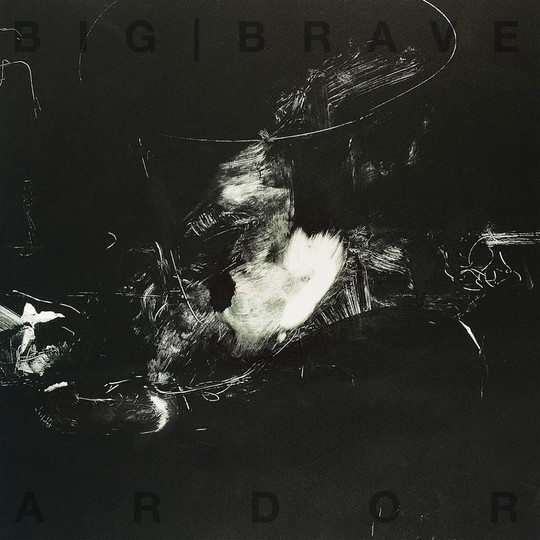 Big | Brave are signed to American experimental metal label Southern Lord, but their music is less easily definable than many of their label mates. They certainly share the brutal heaviness of that genre, but their emotionally charged music has an epic, sprawling quality that also aligns it with post-rock. With that in mind, it’s unsurprising that the Montrealers have enlisted violinist Jessica Moss and Godspeed You Black Emperor’s Thierry Amar, who plays contrabass on two of the tracks, for their latest record. Both Moss and Godspeed are on Canada’s post-rock label Constellation, and Big | Brave occupy a musical landscape that thrillingly absorbs both genres.

Aside from their collaborators, the trio utilise just drums, two guitars, and vocals to make ambitious music that belies their slim arsenal. Equally, their approach eschews traditional chorus versus course structures for something far less defined, but no less gripping. Comprised of just three tracks the record still comes in at just over 42 minutes, and for a band that is unafraid of moments of silence, it is remarkably captivating. The opening track ‘Sound’ begins with swathes of guitar feedback that are eventually shattered by thunderous drums and pounding riffs. The tempo is a slow grind that wrings out every element for its theatrical worth. Blending the heaviness of the playing with an even tempered approach supports steadily unfolding drama. It’s a weighty opener and one that preps the listener well for Ardor’s breadth.

Conversely, ‘Lull’ doesn't pulverise the ear drums quite so ferociously, but it does maintain an ominous groove, and an urgent, reaching vocal from Wattie. There’s a minimalism to their music in its drone-like structures, but it’s also rich with detail which makes for a record that you can really get your teeth into. Moss adds highlights to the dark dirge of the drums and guitar, and this additional layer is a sorrowful one. Wattie’s high emotive voice calls out “I miss you is all I can say/you were my best friend” which pierces through the savage guitar work and muscular seething drums to poignant effect. Wattie and Mathieu Bernard Ball guitar’s have a gritty texture and a billowing presence, and the feedback is played out with such dexterity as one guitar grinds the other is high and steely. Their manipulation of opposing forces is thrilling.

As the album goes on the track length grows, and ‘Borer’ is an epic closer both in length and reach. The throbbing opening only grows in power, but vocally it’s the most affectingly melodic. But that sweetness becomes more desperate as the track progresses, with Wattie insisting, “I am protected / I am Immune” like some sort of shamanic chant. Lyrically the album is impressionistic, with her voice acting more like an additional instrument rather than as a conduit for a specific message or meaning, and that vagueness only serves the atmospheric mystery of the record.

Ardor bides its time and it was made by a band brave enough to create music and a track listing that allows this spectacle of a record to satisfying inch towards a riveting pitch. It’s an album that evokes the ear blistering noise of Sunn O))) but it’s also emotionally charged music. Big | Brave have somehow made a ruthlessly loud record that is also fascinating, and consistently elegant.