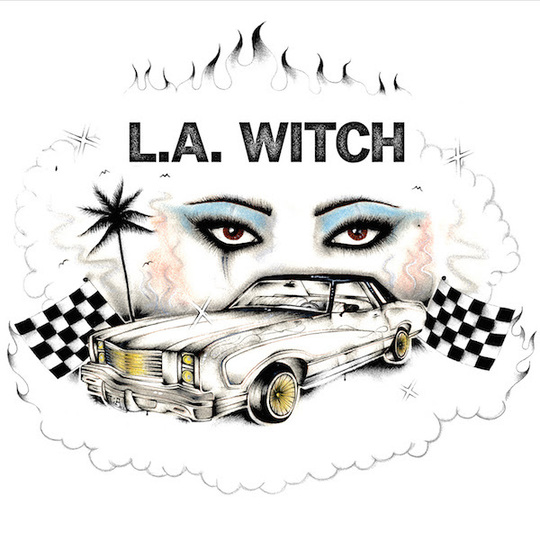 L.A. Witch have been in and out of various studios in between near relentless touring for several years, but have never previously been satisfied enough to release the results. This might seem difficult to understand in that their self-titled debut LP feels a simple affair upon first glance. The tracklist conjures quintessential images of Southern California life: faded glamour, tumultuous romances and the ups and downs of leather jacketed reprobates. Underneath the idealistic vision of palm trees and big cars, however, L.A. Witch has a darker underbelly that is dirty and menacing but wholly addictive.

The first and main point about the album might seem obvious, but if you happen to be sensitive to gratuitous levels of fuzz and reverb, then here is your best chance to back out.

Compositionally, L.A. Witch is stripped right down to the bare essentials and, as a result, is proudly strident and successful in its simplicity. Nine unfussy arrangements give the trio the room to stretch out to where other bands dare not tread. Without warning, a song will slow right down or speed up dramatically. After pounding the shit out of her drums, Ellie English will pull back into a more sedate girl-group beat, with Irita Pai’s low-end following along with the kind of garage looseness you’d hope for, without sacrificing any of their synchronicity. It’s not a massive stretch of the imagination to suggest that this is a band that have shared a lot of eye contact over the years to sound so tight and yet so effortless.

The country-tinged pummel of ‘Untitled’ is a real standout until ‘Drive Your Car’ dominates with its propulsive, straight ahead bass’n’drums intro. Initially, it sounds more like it could have been cooked up in a frostbitten lockup in Salford at the tail end of the Seventies. It effectively blindsides any potential accusations that this is an album of sun-bleached knife wielders or goths with surfboards.

Sade Sanchez’s guitar chops lean far more in the direction of squeezing every drop of aching tone out of her guitar parts, as opposed to vacuous shredding. Vocally, however, she is better defined by an ominous sense of restraint. Much like the band themselves, you won’t find anything here that’s non-essential.

Resuscitating and cherry picking from the Sixties is certainly nothing new. It can often be a smokescreen for opportunistic bands to paper over their lack of ability, ideas and, most importantly, songwriting. L.A. Witch, however, hit the spot. It is an album that has quite clearly been conceived, refined and reformed over a long process, then put to the ultimate test of touring, touring and then touring even more.

The band’s ability to immediately evoke the right mood and atmosphere from the jangle of an echo-drenched E chord, or from the faint shake of a tambourine at the back of the a room tells us in no uncertain terms that L.A. Witch are collectors, obsessives and auteurs rather than posers grabbing the nearest pair of shades and expecting the rest to just fall into place. Tasteful and tactful enough to use their wide range of influences, this is an impressive body of work that upholds the finest garage tradition: missed completely by the majority, but obsessed over and taken straight to heart by those who can’t resist their records a little on the rougher side.