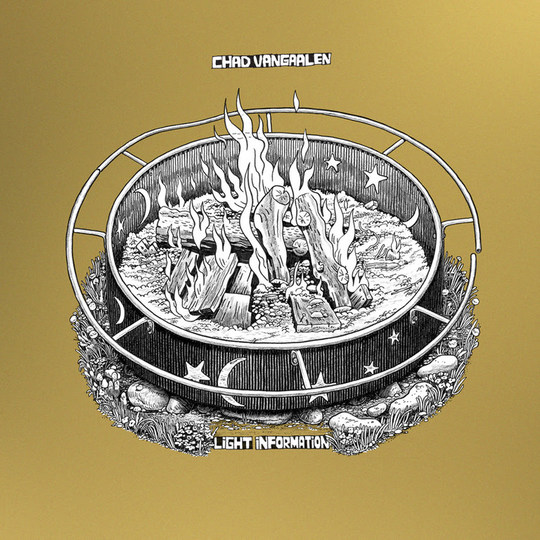 Ladies, gents, and parasitic germs: I return today to headquarters after a long, strange journey. Far away, high up north in a distant land where every face stares at blank lights and every creature could burst into a kaleidoscopic sketch, I charted the fantastical lands conceived by Chad VanGaalen. Yet, no matter how peculiar the contours would seem, no matter what morbid demons the routes would plow through, I felt eerily at ease within Light Information. For our host is a prismatic genius, of many talents – and among them is his uncanny ability to merge surreal dilemmas with irresistible melodies, the kinds that soothe and embrace.

Now, this paragraph would be the space where I introduced you to the vast plains smoothed by VanGaalen’s hand. But, after a dozen years of indelible hooks, bizarro 'country' albums, and ingenuous instrument clusters, the best way to learn about Calgary’s resident wizard is to close your eyes and fall backwards into the whole mess, and trust that pure dreams will catch you. And they will – but thou shalt emerge in a new giddy form, one that will sense a softer, Neil Young-ish line through the eclectic Elephant 6-like doodles, one that began around 2011’s Diaper Island and blossoms to a point here.

Well – sort of. But first, the giddiness, for giddiness stems readily from VanGaalen’s shaky, high-octave croons. Perhaps that nervy tremor is what makes the joy so real and easy to tap, like how the laser-keen ‘Mind Hijacker’s Curse’ transitions from "she’s got nobody" to "she’s got no ba, ba ba bababa body" (swoon!). And oh! how seamlessly that slips into the Nilsson-like rumble of ‘Locked In The Phase’, and reaches the same glorious and inexplicable highs through loneliness and self-doubt! How perfect is the frenetic weirdo surf of ‘Golden Oceans’, the kind of flawless lo-fi romp that Waaves or Tijuana Panthers would kill to replicate!

At any rate, yes – you will notice that, even among such novelties as squiggly synths and soaring space dust, VanGaalen draws from familiar territory. What makes these songs truly surreal (and ergo, sublime) are his wacky scenes, both monstrous and endearingly human all at once. Chillax at your own risk to ‘Faces Lit’ and its Mac DeMarco-like swing – it’s all about (and none too subtly) our addiction to smartphones and their dopamine delivery systems. Meanwhile, I still can’t figure out if ‘Old Heads’ is about figurative identities or literal sprouting heads, but that operator “keeping all my selves together” sounds like an entity that any soul spiraling in and out of mental wellbeing would cry out for.

The second stretch of Light Information - low valleys, open porches, rocking chairs, that Neil Young streak – proves further VanGaalen’s capacity for capturing beauty in the bizarre. One of my colleagues has fallen for the lovingly warped ‘You Fool’, and I can’t blame him. Me, I love the sloppy grandeur of ‘Broken Bell’, and the candid wishes for familial unity in the face of encroaching age; “I’m not very good at this kind of thing,” he admits, without realizing what heart and courage lies in admitting such faults in the first place.

That, I believe, is the most wonderful thing about this world that VanGaalen inhabits: no matter what bestial form he takes, or how many tentacles he deploys, he unknowingly reveals a kind and shining soul that wouldn’t dare slight any other fellow creature. His own nerves and self-doubt - expressed plainly in the jubilant closer ‘Static Shape’, a poignant talisman to ward off negativity with mundane magic - only magnifies this accidental aura. And that would explain why I’m so at home here, in the land of Light Information – because wherever I find myself in this strange (albeit not quite so strange, given what I’ve seen of VanGaalen) land, I can always be assured that he’s there with me, as lost and confused as I am.