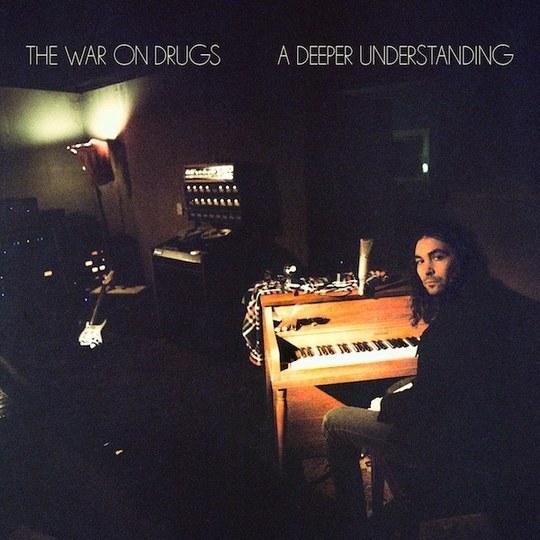 There will be those who disagree with me because they're stoned, and I say this as a long term fan of the band, but the songs on A Deeper Understanding, the new album from The War on Drugs, are pretty samey.

You can kind of guess the deal: long, reverby, minor key, melancholic, sounds absolutely phenomenal if you're mellowed off your goard... while a palpably different beast to its predecessors, with a fuller and denser 'band' sound, A Deeper Understanding is not a surprising record.

There will be those who disagree with me because they’re only listening superficially and have fixed idea about what The War on Drugs are and represent, but get past A Deeper Understanding’s most obvious characteristics – Adam Granduciel's sublime, languorous Neil Young-meets-Robert Smith guitar tone and battered lungs – and there’s a strange and brave record lurking underneath.

Opener 'Up All Night' kicks off with an entirely startling sound: a wantonly tacky drum machine that fidgets away with a fascinating unexpectedness, almost deliberately puncturing the band's innate grandiosity; 'Pain' changes tack for underpinnings of sprightly piano and an absolutely almighty guitar solo that you could drown in; 'Hold On' ups the tempo a fraction and is probably the closest thing on A Deeper Understanding to the Dylan-gone-new wave textures of the band's early work. Later on, as we get further into the record, it’s amazing how bizarre it sounds if you really stop to think: ‘Thinking of a Place’ is 12 minutes long, the first six of them a cavernous wash of synth before a massive, strangely primitive Crazy Horse-style solo hacks into it around the six-minute mark then retreats, leaving the song to simply dissolving into a pool of harmonica and ethereal female vocals. Put the album on at any other given moment and you’re liable to find yourself confronted with as weird a guitar sound as you’ll find on a major label album in 2017.

But here’s the thing: I’m not sure how much you notice all that when confronted by the full songs, bound together by Granduciel’s grand, echoey production. In essence if you don’t examine the parts but focus on the whole tunes, you’re left with a bunch of richly melodic, richly melancholic guitar epics that sound strangely – if, it has to be said, beautifully – homogenous.

It's a funny album to judge: 20 or 30 years ago I suspect its unabashedly AOR production would probably have seen it unfairly panned; in 2017, coming off the back of the phenomenal Lost In the Dream, I suspect it might get a little overpraised. Personally I like it, even if the cumulative impact can be War of Drugs-ish that it verges on being a guilty pleasure. There is very, very little for you here if you don't dig lushly-produced guitar solos, although they're always interesting guitar solos – The War on Drugs are not a soft rock band.

A Deeper Understanding is a record that does and doesn’t put itself out there. If the music is technically probably rather more questing and brave, it never matches Lost in the Dream's highest highs: the music feels a bit too cluttered to quite have the same bleak emotional impact and gracious builds, and there's nothing with the burning pop song intensity of 'Red Eyes', or the sublime ascent of 'An Ocean Between the Waves'.

And yet it feels like an album of great integrity: even if his lyrics border on generic mumbling about feeling sad, Grandiciel's sincerity and sobriety never feel in doubt. He sounds like a lonely man who has taken genuine comfort in the astonishing sounds he can create, but has perhaps turned them into too much of a safety blanket via his own production. Maybe it feels like a safety blanket for me too – easier to get lost in than pay attention to. Produced differently, A Deeper Understanding could be really startling stuff; as it is, it feels like The War on Drugs have made an agreeable, fan-pleasing album to escape into and hide in, not to a record to take on the world – but perhaps that’s not such a bad thing in 2017.