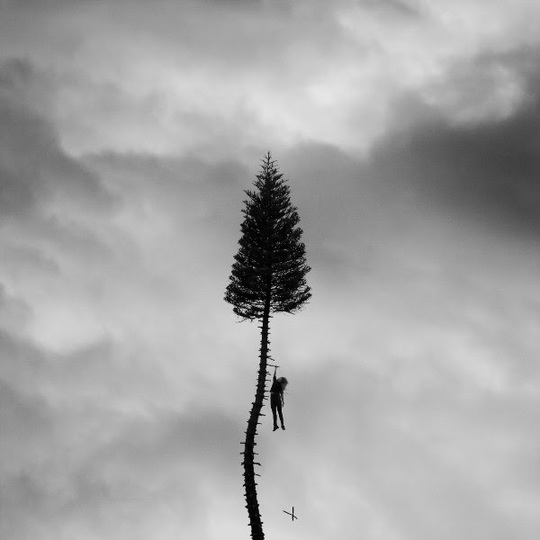 When Manchester Orchestra first appeared, they were weary beyond their years. Arriving at I’m Like A Virgin Losing A Child via a MySpace clickhole, I was struck by how, just a little younger than me, they could convey such weight and power. Andy Hull spoke of rage and depression, curling words into a sneer that suggested he was just about done with everything. I’m fairly sure ‘Sleeper 1972’ was my MySpace profile song for a while, as if aligning with such a broken thing would somehow make me more interesting by proxy.

However, the trouble with any label that adds a ‘beyond their years’ suffix is that future expectations are tarnished by age, and age is impossible to outrun. The band remained in front on Mean Everything To Nothing by ramping up the anger and adding a stone-cold classic in ‘I Can Feel A Hot One’. Seriously, if you listen to that for the first time and aren’t moved in some way, you’re a fucking vampire.

By the time Simple Math rolled around, though, things were unravelling. Most of the songs felt bloated and unwieldy, with rage giving way to self-pity and maudlin excess. Band Of Horses, basically. The course-correction attempted with 2013/14’s Cope and Hope combo, was an arms-length kind of return, with any bile or sharp edges dulled by the flattest production in existence. I felt I’d outgrown them, and was content to leave.

What caught my attention again was Hull and Robert McDowell’s excellent work on the Swiss Army Man soundtrack, conjuring a minimal backdrop of found sounds and vocal harmonies to stitch together the visuals in a compelling, instinctive way. It showed a level of restraint and awareness lacking in their last few years as Manchester Orchestra.

And so to A Black Mile To The Surface, where the band have torn themselves apart just to see what’s inside. Rummaging through the tracks, we find Arcade Fire, Rocky Votalato, First Aid Kit, and REM lurking underneath electronics, samples, arena-rock sheen, orchestral grandeur, intimate fingerpicking and a half-abandoned concept album. If it sounds like a mess, it really is. I couldn’t get through the whole thing in a single sitting for a full week, and it’s not even that long. There’s nothing to cling to as songs blur into each other and hooks drown under approximately 16.8 billion waves of zigzagging instrumentation. When ‘The Parts’ arrives, I’m so grateful for the extended respite, even if it is entirely a Tom McRae song. Side note: oh, how I love Tom McRae.

I trudge through the next few days with A Black Mile… incessantly clubbing my poor ears until I’m ready to throw my phone into the Tyne. But then, imperceptibly, I start to come around. My heart does a little jump when ‘The Gold’ bleeds into ‘The Moth', then again when that song reaches its climax. I find myself tunelessly wailing along to ‘Lead, SD’ as I drive down the motorway, unaware I even knew the words. When Hull pushes his voice to its limit on ‘The Grocery’, I’m back trawling MySpace for music in my dad’s house. It’s a real creeper, this one, steeped in memory.

What ultimately emerges is the vein of paranoia running through the whole thing – explicitly the fear of fatherhood and its inherent responsibility. The subjects, timelines and characters of the songs swing wildly between autobiography and supernatural horror like a David Mitchell novel, but that little thread of parental anxiety remains throughout. Things come to a head on closing track ‘The Silence’ when Hull drops the cloak and addresses his daughter directly on the album’s final lyrics: ”Little girl, you are cursed by my ancestry / there is nothing but darkness and agony / I can not only see but you stop me from blinking / let me watch you as close as a memory / let me hold you above all the misery / let me open my eyes and be glad that I got here.” It’s a brutal admission of love and terror that stays with you long after the LP is over.

It’s easy to be cynical and mock just how earnest this album is, and how seriously it takes itself. Aside from ‘Lead, SD’, all the song titles begin with ‘The’, and the video to accompany ‘The Alien’ features slow-motion tragedy shown in reverse, as if Coldplay’s ‘The Scientist’ didn’t already exist, intercut with grainy home-movie footage for extra portent. Manchester Orchestra have always been earnest, though; it’s just that, until now, they’ve been hamstrung by their own impulses. By consciously interrogating everything they do, they’ve created something that doesn’t need a condescending suffix to justify its existence. It’s a new high-water mark for the band, and one well worth the pain to reach.