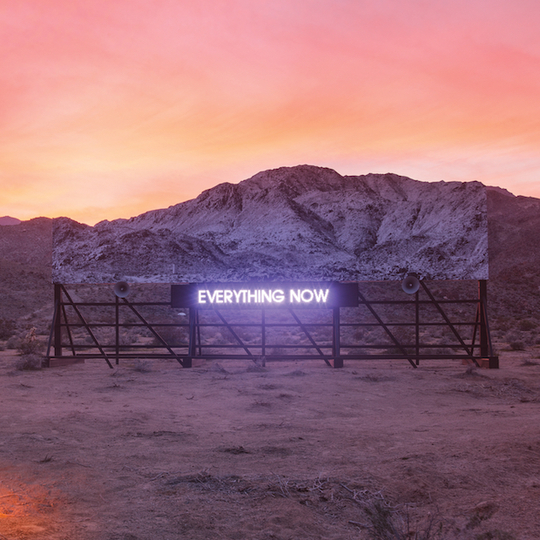 Arcade Fire’s fifth album is striking for both its fearless – arguably hubristic – jettisoning of much that people loved about the Montreal collective, and its total, wholehearted embrace of what one might loosely describe as new wave synth pop.

Lead single ‘Everything Now’ is a bit of a red herring: as has been widely noted, it sounds fair bit like ABBA. Less widely noted – because why would you? – is that it also sounds a fair bit like Arcade Fire. Sure, it’s geed up with a glistening major key piano figure and enormous chanted chorus, but it’s a big, yearning song with lyrics (“everything that I’ve ever heard is playing at the same time”) and a warm Win Butler vocal to match.

But in sounding a fair bit like Arcade Fire it is not especially representative of an album built on pummelling, punky synth figures, harshly yelped vocals and a distinct lack of that spiritual yearning that was a common thread throughout those first four albums.

Or at least, it’s not representative if you discount the fact that there are three versions of it on the album. Anybody who has followed the promotional campaign for this record will be aware that – in a presumably entirely deliberate irony – the marketing campaign is based around a sort of tongue-in-cheek attack on consumerism. The extent to which this is really continued on the record is debatable, but there are pops at capitalism throughout and a vague sense that we’re being lightly trolled at times, such as by the inessential, bookending album tracks, both of which are called ‘Everything Now (Continued)’, and the fact that there are two versions of the song ‘Infinite Content’ immediately next to each other – one an urgent, heady thrash “infinite content! Infinite content! Infinitely content!], the other a wilfully chintzy country ballad. It never feels like a concept record – there is no mention of the promo campaign’s Everything Now Corporation – but certainly something has changed.

Everything Now seems to carry faint echoes of Neon Bible’s disaffection, but instead of channeling it via brooding big rock bombast they’ve gone virtually the opposite way.

The album’s best, most problematic and probably most representative track is undoubtedly the single ‘Creature Comfort’. Over a gorgeously pulsing synth line reminiscent of the brief era when New Order and The Cure were rivals, Win and Regime deliver their most intense vocal performances on the record. The standout lyric is “God make me famous, if you can’t, just make it painless” – a great, nihilistic line - but delve into the verses and there’s some properly troubling stuff. “She dreams about dying all the time, she told me she came so close, filled up the bathtub and put on our first record” – I mean seriously, wtf is this? Who are these people? The meaning of the line rather hinges on whether this really happened or not, but putting a self-referential quip about Funeral on a song about suicide is not the band we once knew.

The shift is sonic as well as attitudinal, though it’s the combination of the two that really afford the sense that this isn’t the band we once knew. Under the guidance of Brit producers Geoff Barrow and Steve Mackey, the band has rebuilt their sound around a vast arsenal of jagged keyboard riffs and angular grooves. But the results don’t always hit home convincingly: ‘Signs of Life’ and ‘Chemistry’ offer loving homage to the funkier end of Seventies Talking Heads, but it’s strange and somewhat disconcerting to hear the band ditch the emotional weight that was ever present on even Reflektor’s more out-there moments. Gravitas was always the band’s defining characteristic, and without that some songs are in danger of flying away (‘Peter Pan’, ‘Good God Damn’) no matter how interesting the sounds that underpin them.

This is not to say the approach doesn’t throw up gold too – the ethereal, Blondie-esque ‘Electric Blue’ is an absolute stunner. And suggesting the band no longer make emotional music would be a step too far, as the climatic six-and-a-half-minute ballad ‘We Don’t Deserve Love’ attests.

For all their wanderings from the template of The Arcade Fire and Funeral, the band have maintained a weight and seriousness that must have itself been a burden at times. In ditching or subverting it there must be a tremendous sense of freedom, and if the refusal to play to old strengths has a slightly scattergun effect, it’s hard to begrudge this slightly mad record. There will be those Everything Now alienates, but Arcade Fire are not your corporate product.