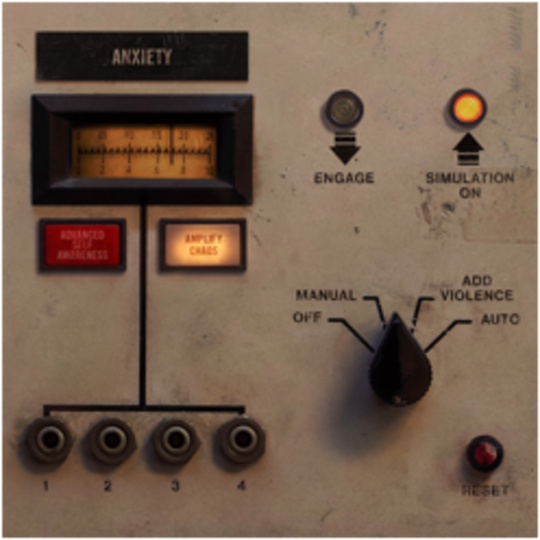 Trent’s back! Again! Hooray! Following on from Not The Actual Events, which Nine Inch Nails released late last year, Add Violence is the second in an apparent trilogy of EPs, and continues the thread of new NIN really rather nicely.

These EPs mark the first major material – excluding the instrumental ‘Ghosts’ project – Reznor’s put his band name to since 2013’s album Hesitation Marks, a largely enjoyable, if a little overlong excursion into the more synth-based area of their sound - perhaps due to synthesiser maestro Alessandro Cortini’s influence, it nevertheless was interesting to see NIN adopt a more synthetic sound, echoing early chapters of the band’s line-up, but updating it into the twenty-first century. It was synth music, but angry synth music.

And so we enter Add Violence. Taking NTAE’s initial setup as a building block on which Trent is stacking these EPs, it’s actually really fun inhabiting these new little snippets of the Nine Inch Nails world. At only five tracks, it’s a little light on substance, but what we do get is a really fascinating insight into where Reznor is at with NIN at the moment. Much like NTAE, you can pretty much split the tracks into two camps: the ‘rock’ ones, and the ‘synth’ ones, with a little overlap in-between. That’s no bad thing, as he’s pretty much always done that, but these EPs work almost like testing boards, with both sides jostling for position with each other. Guitars squeal, Cortini’s synths bubble and drums pound and pound, just like all NIN stuff does. Musically, there’s nothing here that’s too out of leftfield for hardened fans and fair-weather ones to boot - the pianos all sound exactly like they do on all his stuff, the chord progressions, melodies, and lyrics all tick the boxes for Trent Reznor creations, but I swear he has some kind of voodoo for making this stuff super enjoyable all the same. With any other band, I’d have given up by now in a hissy 'oh but it all sounds the fucking same!' fit, but the great thing about Reznor is that he knows how to tweak his formula just enough to tread that line between utopia and oblivion.

Lead single ‘Less Than’ is probably the poppiest thing he’s done in a long time, with a massive guitar hook and gurgling synths over a pretty big Eighties beat, and it’s no coincidence is also one of the most fun things he’s done in a long time. Elsewhere, we get Trent in a variety of positions: the trippy synth and piano lament ‘The Lovers’ acts as a sort of prelude to ‘Dear World,’ from Not The Actual Events, with a manic spoken word section lightly simmering underneath everything, he actually comes across as lovelorn as he croons “please, take me into the arms of the lovers” over decidedly minor key chords. ‘This Isn’t The Place’ actually gives us a rare glimpse of a raw Reznor vocal, as his completely dry voice cracks in the first line, allowing a pretty tender song to unfurl around him - those atmospheric guitars howl around a bedrock of drum machines and some seriously bass heavy synth action.

‘Not Anymore’ falls defiantly in the ‘rock’ camp, and is almost a lost, more upbeat sibling to ‘She’s Gone Away’ from NTAE, which is immortalised in NIN-lore as ‘the one he did on Twin Peaks’. Trading the sludge and menace of the latter for a similarly scrappy, noisy feel, but here he’s faster and angrier. His latest dalliance with all things Lynch has even earned him a conspiracy theory in that apparently the new Twin Peaks plot can be explained within song titles from these EPs. Read into that what you will, but Lynch apparently masterminding the content in these releases is a bit of a stretch if you ask me. Still, you can see how Lynch’s dark, sensual world is feeding into Trent’s equally dark and seedy universe.

On ‘The Background World’ we get NIN at a slower pace, a bit more together, languid almost, with that swagger that made ’Closer’ such a massive piece of music. Still, he can’t resist fucking with you, so adds six minutes of a loop slowly decaying into distorted mush at the end of the thing, and in a really jarring fashion, by having the loop not loop, and instead unsettling you with a tiny bracket of silence in-between, so it’s not looping perfectly. I’ll give you a tenner if you can make it through the whole thing without throwing your computer out the window. Still, I’m sure that’s what he was intending anyway.

Overall, it’s always good to have NIN back and also great to see Trent having fun playing around with both his sound, and the way he’s presenting this material to the world: a standard album might’ve sucked all the fun out of this, so it’s interesting to watch him play around with what he has - there are no preconceptions about an album acting as a whole piece of work, and it’s certainly allowed him to be a little less bogged down in all that and freed him up to just try stuff out. So yeah, kudos Trent, kudos.