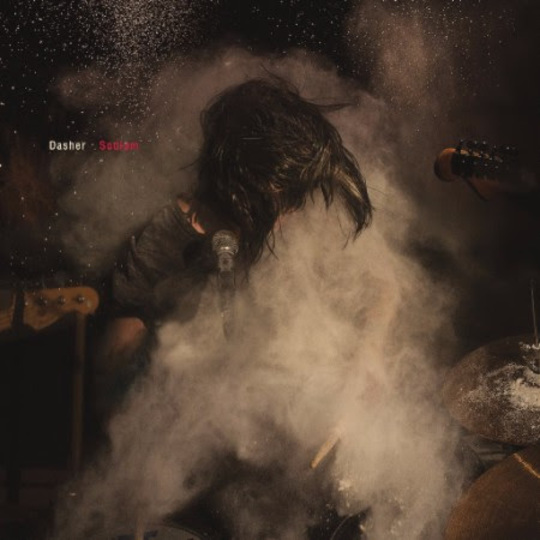 Remember Eagulls? Remember when they pretended to dwell in sewers in their press shots, but then sounded like they actually dwelled in sewers? And they were awesome, even if they were just four more white dudes coasting through the underground? Biases, hang-ups, doubt, derision – any critical catalyst evaporated under blazing deathrays of bellows and burning-rubber velocity.

Likewise, no protractor could conceive a convoluted angle for apprising Dasher. Consider only the basics: explosions, blood-curdling cries that echo for days, axes wielded like axes, bass lines flying like the white lines on a desert highway as your getaway ride bails at 90 miles an hour (we’re American, suckerrrrrs). And as in the dank halls of Eagulls, any shade of nuance fades into the great abyss, so that all we hear in Sodium is the ravaging, the raking, the KILL. That bloodlust does eventually funnel into mere tunnel vision sometimes, but still – ya can’t fault Dasher for sticking to their assault rifles.

There is a story, if you care for the plot lines behind massacres. Kylee Kimbrough, the badass mother behind all the screeching, moved away from Atlanta to Bloomington, Indiana to wipe her slate clean and start anew, after years of hopping from job to job and house to house. So when she yells stuff like “I FAKE MY WAY THROUGH MOST THINGS”, or “YOU DON’T HATE ME – WHYYYYYY?”, or segues abruptly into a list of junk foods on the savagely slow title track (liiiiiike, Slowdive-screaming bloody-murder-in-a-car-crash savage), that’s no mere posing for the camera. That’s real self-doubt, a scalpel-sharp scraping of self that should resonate with anyone who’s ever felt dysfunctional in modern society.

Now, Sodium does slay. But Dasher whizz through in such a hardcore blur, that the highlights of the album get buried in the carnage. On their own, the searing nihilism of tracks like 'Soviet' and 'Get So Low' could rip any all-male competitors to shreds; together, however, they bleed into a crimson haze of carnage, indistinguishable in the twilight fog.

Oh, but there are glorious exceptions, of course. The slower moments on Sodium, where Dasher accrue the most filth, definitely stagger out first from the fog, like the steaming pile of sludge that is 'Teeth'. 'Trespass' cleaves through like a Chrome-edged (or Factrix-edged, for that matter) butcher knife into the heart of Protomartyr. Not to mention, the way Kimbrough bellows YOU FUCKING PIECE OF SHIT, as if the person in question is a literal copulating shard of feces, could be the single most badass second of 2017.

Yet, as much as I want to boost the concept of Dasher (concept: of woman as genderless, uncultured and not giving a fuck about being uncultured – see 'Go Rambo'), the execution doesn’t quite rattle me enough. I’m looking at the first Eagulls record, Bambara’s Dreamviolence, the first Odonis Odonis EP – these are all shades of gothic horror from the last five years that, ultimately, also let me down. Why? Well, because when I finally saw the latter pair, they played in two of the most traditionally laddish shows I’ve ever stumbled into, where their studio-wrought demons merged unceremoniously with the rest of the 'serious' dude rock on tap. And then, y’know what happened to Eagulls – they simply simpered into velveteen Bunnymen, sleepwalking from the sewers in a nostalgic fog, with the last drops of Robert Smith’s heroin in their veins. Dasher, at least, seem to shout down such legacy-tailing with irreverent grease and soil – but darkness, I’ve found, tends to stave off innovation, and starved bands tend to calcify into complacency. Remember Eagulls, y’all – and beware the same fate.