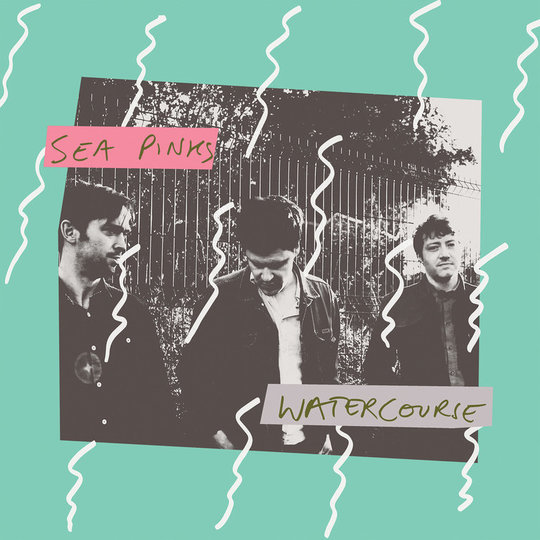 Sea Pinks have been cranking out savoury music for close to a decade, but unfortunately have yet to light the world ablaze. What was initially conceived as a hobbyist side project for Girls Names’ Neil Brogan has blossomed into one of Belfast’s most prestigious groups. Since 2010, Sea Pinks have released six albums of infectious jangle pop and surf rock that has been compared to the likes of Real Estate and The Ducktails, but their lack of critical inclusion in this overcrowded genre has limited their reach somewhat. Last year’s Soft Days brought the band a bit more prestige, displaying a skintight collection of catchy melodies and hummable, finite lyrics. However, their latest offering, Watercourse, is a slightly more evolved sound, featuring the band remain steadfast in their formula while punching it up at just the right junctures.

Neil Brogan and company have the proficient ability to create moments of pure, unadulterated pop bliss through a combination of luminescent choruses and sunny instrumentation. Brogan has been reluctant to name his musical influences in the past, but it’s clear the translucent aura of past and present California surf-rock bands has had a divine influence on Sea Pinks. A deceptively simple guitar riff permeates the opening and title track, and Brogan delivers dreamy lyrics that augment the buoyant ambiance. But the three-piece is in top-form on 'Places She Goes', which exhibits a harmonic blend of fuzzy guitars and a visceral pathos in Brogan’s crooning that recalls their greatest moments.

There is a haunting essence that pervades 'I Don’t Know What I Would Do (Without You)'. Brogan paints himself as an aimless wanderer dependent on the protection of a lover. The track is catchy yet funereal in its early stages, then morphs temporarily into a jubilant tone during the chorus, providing for a splendid juxtaposition where Brogan employs a sentimental and affecting vocal surrender. 'Gonalong' abounds in the same sort of reverie the band is renowned for, with Brogan gathering the remnants of a lost relationship in crisp detail. The instrumentals are much more sparse and tighter than past releases, and Brogan seems to glide effortlessly over the wide musical net that is cast for him by bassist Steven Henry and drummer Davey Agnew.

The second half of Watercourse still retains the whimsical, dreamy jangle-pop that the band is known for but incorporates more of an up-tempo punk edge. Additionally, the lyrics become more introspective rather than observational. There is a gritty atmosphere to 'How Long Must I Be Denied?' which accompanies punchy drums and a steady yet breakneck bassline. There is still an addictive, dreampop quality to the song but it is amplified by an agitable lifeblood that showcases Brogan’s musings about rejection in a grim light. The same sort of guttural vibe delineates 'Playin’ For Pride', though ultimately the lazy chorus falls flat. What remains is a palpable, invigorating instrumental backdrop that sounds discordant with Brogan’s haphazard vocals. It’s clear that the band is attempting to experiment, but discord doesn’t suit this band as well as their meticulously built melodies.

The fused and in sync melodies pick back up in 'Shock of the New'. There is a deft nimbleness to the sound that augments Brogan’s shapeshifting vocals, dotted with a balancing act of passive and aggressive crooning. 'Water Spirit' is stripped down and effervescent, brimming with an exuberant aura. The song wafts between a hushed, peppery sound and a jolting wall of noise. Here the band band seems unencumbered with trying to prove their merit, and as a result let the rhythms dictate their direction. It’s not a matter of complacency, but rather the trio recognising their strengths and building upon them with fine craftsmanship. The desire to distinguish themselves among the fray of dreampop enthusiasts looms large, but for the most part, Sea Pinks have tinkered with their sound enough to know what works and what doesn’t.

Sea Pinks may never be indie legends, due in main part to industry politics, but their bonafide sound keeps improving with every subsequent release. They like many bands invoke the essence of beachy, dreampop laced with memorable lyrics that manage to stay implanted in the head long after the track is finished. With Henry and Agnew, Brogan has stumbled on an iteration of the band that could compete with the past pioneers and current champions of the genre. Only time will tell what career the band will ultimately have, but for now Watercourse is a glossy affirmation of their talent.