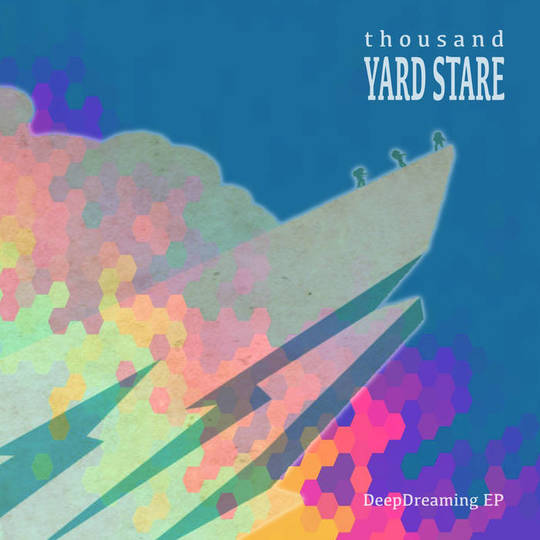 With so many bands hitting the comeback trail, it's becoming increasingly difficult to separate the wheat from the chaff. The mercenaries only in it for one last pay day and those with a point to prove. Creative juices in overflow. Unfinished business their sole motivation.

Already this year we've seen new releases from The Jesus & Mary Chain and At The Drive-In while cautiously anticipating the arrival of a new Ride album next month. The first week in May usually brings the opening bout of sunshine to announce the official arrival of summertime. This year its been overshadowed by the return of not one but two releases that seemed highly unlikely just a couple of years ago. Slowdive's first album in 22 years has already been well documented on these pages and deservedly so. The return of Thousand Yard Stare may not have received the same level of international coverage but to those that care - and judging by the turnouts at last year's 100 Club show and subsequent UK tour many still do - it's one to rival that of the prodigal son in the Gospel of Luke (Chapter 15).

Last year's Live At Electric Studios collection clearly whetted the appetite, as did the inclusion of three new compositions. Two of which ('Dystopia' and 'Heimlich Mnrvr') make a reappearance here. Released quite aptly to coincide with the 25th anniversary of Hands On, the band's debut LP and arguably one of the most underrated and unsung records from that era. This double EP not only suggests Thousand Yard Stare have regained their mojo when it comes to crafting new songs, it also contains several gems that usurp much of their maligned second album Mappamundi.

Recorded last year at Electric Studios (where else!) with Dan Swift, who's previously worked with the likes of Iggy Pop, Nick Cave, Art Brut and Snow Patrol, it would probably have been easier and some would say much more sensible to have put these songs out as an album. But Thousand Yard Stare gained a glowing reputation in the early part of their career thanks to a succession of flawless EPs that contained zero filler where every song could have been an A-side. Both DeepDreaming and StarGrazing continues that trend in admirable fashion. Admirable mostly because despite the near quarter of a century absence from the confines of a recording studio it sounds like they've never been away.

Indeed, the likes of 'Epecuen', which opens the StarGrazing EP, isn't so much a natural progression, but the sound of a band finally finding its feet after all these years. Having found themselves placed on the bill for 1991's legendary Slough Festival - more by logistics than anything else - the billowing reverb and echoed delay that permeates its core would fit in well with the rest of that line up today. Perhaps more so than they did at the time. "If I find the answer..." sings Stephen Barnes inquisitively over the song's woozy coda. It's not so much a reintroduction to their wares but more of a renaissance of sorts. A way of sticking two fingers up and screaming "I told you so!" at any detractors from yesteryear lurking in the shadows.

'Dystopia' is perhaps the closest they get to the more recognisable sound of their earlier EPs. Giles Duffy and Kevin Moxon's chiming guitars interlope with one another over a big, bouncing chorus that declares to "See you on the battlefield." 'Ciphers' finds them in reflective mood, its dynamic between melody, chorus and rhythm section not that dissimilar to 'Seasonstream' off their aforementioned first album. Meanwhile, 'This Is A Weight', which closes the StarGrazing EP, has a similar feel to Feeder's 'We Can't Rewind' in its quiet verse, heavy chorus structure. "It's not love that's going to tear us apart" sings Barnes wistfully.

Moving onto the DeepDreaming EP, opener 'Action Stations' represents one of the most accessible pieces of music Thousand Yard Stare have ever committed to tape. In a radio friendly kind of way at any rate. Echoes of Duane Eddy's 'Peter Gunn' shroud the song's intro before it drifts into more familiar territories in line with much of their back catalogue. Opting to go down the punchy and upbeat route rather than the introspective one that oversees much of these two EPs, its pop sheen demonstrating their ear for a direct hit as well as a mature guitar sound.

'Black & Blue Sky Thinking' and closer 'Marginal Gains (Stargazing)' once again revel in hazy guitars and a more subtle vocal, once again driven incisively by Sean McDonough and Dominic Bostock on bass and drums respectively. Often the unsung members of the band, it's worth highlighting the important ingredients they add to the band's sound, something that becomes even more immediately obvious in a live setting.

While there are no fixed plans for Thousand Yard Stare to exist either as recording artists or a live band beyond the end of this year, its clear they're still a force to be a reckoned with. Long may that continue.