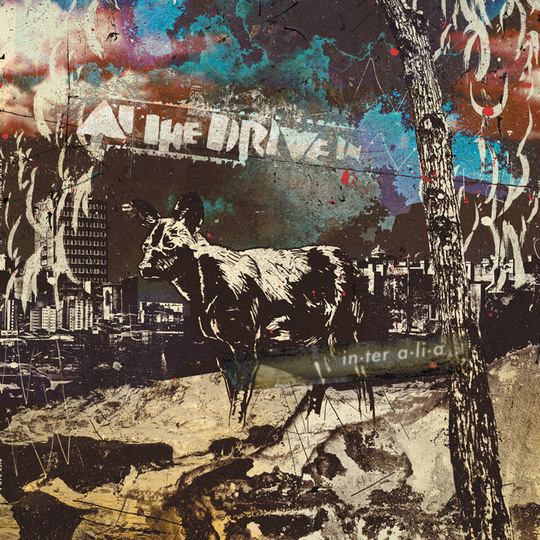 Let’s get it right out of the way, shall we?

Ah, but to what, precisely, does that blunt negative refer to? The weight of expectation can be a terrible thing, but such are the breaks when you choose to follow up a bulletproof work of truly spectacular art. Throw in a near two-decade wait for said sequel and the worry is that you’ve written yourself into an especially harsh corner long before fans and critics have had anything approaching a taste.

With all due respect, At the Drive-In have done this to themselves. In dusting off a revered moniker, embarking on tours and confining themselves to the studio once more, the Texans have invited everything from giddy anticipation to cynical suspicion and all in between. Relationship of Command is a rare zeitgeist-capturing moment worthy of associated hyperbole, a legacy record that seems to get better by the listen, sparking the same spirit, defiance, and wonder in its audience today as it did upon release 17 years ago. To follow it up at all is dangerous. Now north of 40 and having fathered children, going back to their particular post-hardcore well represents quite the gamble, to say the least.

It’s probably not fair to paint In•ter a•li•a in this harsh light, but the shadow is long and hangs heavy over an album that is both keenly aware and hugely up for the fight. Nerves are immediately allayed when ‘No Wolf Like The Present’ kicks in. A worthy mirror to ‘Arcarsenal’, jagged cracks and all, it performs the dual role of call-to-arms and strange salve - At the Drive-In are back, they have purpose, and it turns out that we very much need them. ‘Continuum’ echoes a real sense of distaste; Cedric Bixler-Zavala’s voice every bit as pained, searching and dissatisfied as before.

What lets him, and by consequence In•ter a•li•a, down, comes as a surprise. Where previously it was a downright brawl between vocalist and guitar-wielding lieutenants, a mutually beneficial battle to be heard and deal the most vicious blow, here the guitar lines are supporting players, occasionally passive and a touch watered-down as pinch harmonics and serrated stings emerge as an impression of At the Drive-In rather than the real thing. Perhaps it’s down to the absence of Jim Ward, and it’s really more of a front-loaded issue that improves as the album unfolds, but it’s a nonetheless distracting complaint.

Lead single ‘Governed By Contagions’ signals a welcome uplift, its tom-heavy drum pattern signature – something of a cobbled-together accident, apparently – the kind of delight that should inspire many a new sticksman. Like its parent record, it is a track greatly enhanced by time spent with and removed from; the resultant context putting paid to initial ‘by-the-numbers’ accusations. Elsewhere, ‘the frame of mind of having a child tell you what they see through news feeds or radio’ might read like an eye-rolling premise for a song, but ‘Pendulum In A Peasant Dress’ is a triumph of wills and wit, not to mention one of several instances where Bixler-Zavala sidesteps his established maxim, lending deft twists to roar-along refrains. ‘Incurably Innocent’, meanwhile, is a shattered mask that deals in heavy currency as it addresses sexual abuse, the anguish of silence and the courage to speak up. The chorus is there to be screamed out loud, the catharsis ringing out long after voices fade.

For the most part, In•ter a•li•a is content to exist as a barrage – add ‘Call Broken Arrow’ to the ‘confirmed belter’ list – and almost never strays into more experimental territory as explored by The Mars Volta. There is one sort-of exception, however, in the form of ‘Ghost-Tape No. 9’, a spooky affair inspired by Bixler-Zavala’s fascination with psychological warfare. In essence, he and his cohorts set out to create their own seductive but perilous brand of hypnosis. Guided by gorgeous guitar textures and patient drumming, the singer towers over a tale of fools, grudges and treachery. You completely understand why their comeback record largely ‘plays it safe’ so to speak – even though it doesn’t – but it’s a joy to hear At the Drive-In tap into the same esoteric eccentricity that permeated ‘Invalid Litter Dept’.

Ah, there I go again, bringing up the elephant in the room. Again, how can one not? In truth, letting one bleed into another is a fool’s errand, a distortion that helps nobody and raises questions that can only yield hollow conclusions. Best, then, to let this new missive, all abrasive and agitated, speak for itself. This is the part where I note that scores are nonsense but hey, add the hardest point-five imaginable to the below, won’t you?

Or to put it another way…