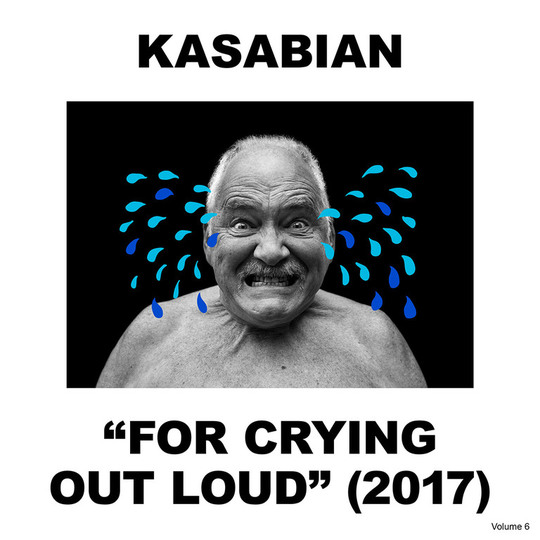 Weird one, this. Kasabian haven’t done anything groundbreaking in their career thus far, but they have operated as a pretty serviceable band with arena-sized tunes that can provide a gateway for better things. We know this album won’t change that. Tracks like ‘Shoot the Runner’ and ‘Vlad the Impaler’ were great in my late teens. But they’ve just never actually been an outstanding act.

But conversely, I loathe the snobbery constantly directed towards the band. They, along with acts like Courteeners and Catfish & The Bottlemen, take a kicking for having the temerity to not want to be The National. It’s music for football fans, as if the only person that could possibly like any of these bands is just going to rock up in their football top, light a flare, piss in plastic cups and chuck them over the crowd. It’s nonsense, and all of these bands inspire passionate responses at their gigs for a reason.

Now Kasabian do themselves little favours here with an album titled For Crying Out Loud and proclamations of saving guitar music from some perceived abyss. It makes Sergio and Tom sound like they’re down the pub and having a moan about the state of things. And immediately they’ve made switch to the snobbery that I’ve just rallied against. Let’s just get on with telling you whether it’s any good.

‘Ill Ray (The King)’ opens the album on a relatively strong note. It’s exactly the sort of track you’d expect them to use as their strong foot forward and no surprise that they’ve been playing it live on their mini-tour. It fulfills the promise of being guitar-heavy while ticking the usual boxes of swagger and lyrics that make very little sense without actually taking away from the song.

You’ll be familiar with ‘You’re In Love With A Psycho’ which recalls their previous track ‘Where Did All The Love Go?’ in that it features a massive singalong chorus that manages to sound muted at the same time. It’s catchy and features the most Kasabian lyric to date: “Jibber jabber at the bargain booze”.

‘TwentyFourSeven’ is the first sign of filler, and with Kasabian there’s usually quite a bit of filler (that’s okay, some bands are just naturally single bands). This comes across like something Hard-Fi would do with the the backing vocals lifted almost directly from the turgid Suburban Knights. ‘Good Fight’ is equally throwaway.

‘Wasted’ is a bit more interesting. It’s a little bit Dire Straits and details a weekend of drinking (shocking, given the title) but not wearing shorts, kissing in alleyways and music that never dies. Now that all sounds incredibly trite written down but Kasabian have never excelled through lyrics and this is another track designed for the live arena where they can get by on force of personality and perfect pacing.

‘Come Back Kid’ is another we already know and has the sort of lyrics just screaming to be randomly projected onto a screen at Glastonbury. The best include “Big cheese in a bedsit, and shit the sky” along with “Sasquatch in a bin bag”. ‘The Party Never Ends’ is the sort of track that makes you want the party to end. There is a nice trumpet solo towards the end, though.

The stuff that they’ve always done best for me is the stuff that feels a little like a dance track. So ‘Are You Looking For Action?’ actually serves as a highlight in the second half the record. Although it is somewhat telegraphed by actually featuring the word bass line in the chorus but subtlety is not what we’re here for. That makes ‘All Through The Night’, a song written in the style of a ballad, somewhat unnecessary. Lyrics of “call my name (all through the night)” and “she could always make the bed bugs bite” are probably meant to be sexy but just highlight that this type of track isn’t their strong point.

I listened to the album a lot building up to the review and I still don’t remember 'Sixteen Blocks' exists when it comes round. Luckily ‘Bless This Acid House’ is the best track on the album, despite the name making you wince. It’s comfortably the catchiest thing here too, sounds a bit like ‘C’est La Vie’ by Stereophonics, which itself sounded quite a lot like Bowie. It’s the one that should hang around setlists for years to come.

The album closes with ‘Put Your Life On it’, which recalls a little bit of Blur in its soulful acousticness but, like most of their quieter material, it fails to move you. And then we’re done and reminded once again that Kasabian are a band that doesn’t produce great albums.

I suppose the question is whether having only a handful of strong tracks (by your own standards) on a record is enough. For Kasabian, I think it is. There’s enough here to mix up their setlist without weakening it. The force of personality from Tom and Sergio is enough to keep them afloat despite hardly being the most creative band out there. Sometimes it’s enough as long as you’re keeping the fanbase happy, especially when they’re more casual as a listener.

But that’s a critique of Kasabian as a whole and not this album. If this was the album to save guitar music from the abyss, then we might as well nudge it over the edge. Luckily it never needed saving and that was just a soundbite for an interview. The result with For Crying Out Loud is that it has bright moments but ultimately adds to the collection of below-par efforts that will do little to extinguish the elitism scorn that they attract.