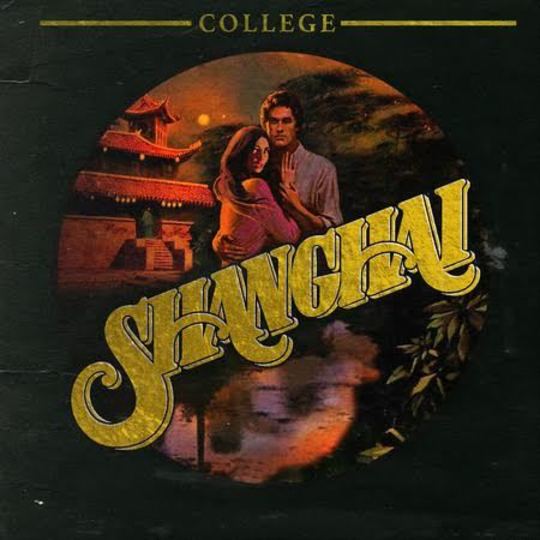 After appearing in Nicolas Winding Refn’s 2011 film Drive, David Grellier aka College became an overnight sensation. His music was soundtracking one of the most talked about – and stylish – films in recent years. His ability to mix cool retro synths with a pop sensibility put him at the forefront of the synthwave scene. Since then he has released a slew of albums and singles on his Valerie label. Now he has returned with a new album called Shanghai.

As the title alludes, Shanghai is a concept album about China’s most populous city. Grellier takes his inspiration form the city’s culture and architecture. Like Shanghai itself, the album is a conflation of ideas, styles and a multiculturalism. Traditional Chinese instruments are juxtaposed with Western electronic nuances. Grellier recently explained Shanghai thus: 'This record is a mysterious ballad in the heart of 1920s Shanghai... An invitation to travel, a tribute to the refinement and in the delicacy of a fantasised and blurry period of time, which fed the imagination of the musicians, the artists and the architects of this mythical city. The keys of this new adventure is in your hands.'

After the slow burning intro of ‘A Strange Guide’ and ‘Bloody Palms’, ‘Hotel Theme Part I’ opens with a woozy synth line. As the song progresses a laconic melody emerges and slowly meanders along evoking a feeling of endless corridors, sun-kissed dining rooms and a feeling of unease that permeates long stays in hotels. ‘Love Peas’ mixes things up a bit by featuring Hama on vocals. Hama is a Shanghai native and sings in her native tongue Hama makes ‘Love Peas’ sound both exotic and exciting. Her delicate vocals compliment the stark music that is reminiscent of The XX. Broody guitars keep the song progressing while synth stabs fill in the gaps left by Hama’s exquisite vocals. ‘Love Peas’ is one of the stand out tracks on the album, but sadly it’s the only track with vocals. From this point on Shanghai tries to up its game, but instead of giving us some slick pop, Grellier gives us ‘Mister Fang’. This is another slow burner, slightly convoluted and laborious. While there is nothing bad about the production and arrangement, the melodies are pleasant, but after the pop gem of ‘Love Peas’ a slightly faster or engaging track might have flowed better. This actually happens on the next track ‘Briefcase’. Skittering rhythms jostle for our attention while Grellier’s trademark woozy synths flow underneath. It feels like a character theme from Street Fighter II. As the song progresses the tempo quickens until its abrupt end. But as soon as it finishes we are back to slow synth meanders. The album closes with ‘8’, which follows on the blueprint that Grellier has laid down throughout the album. Slow intro, delicate melodies with capricious synths, until it all abruptly ends.

Shanghai is an inventive album that effortlessly conjures a vision of a city. While this isn’t an original idea, there are recurring motifs that Grellier uses to evoke the movement and flux of a living city. The only real problem is that Grellier takes far too long to get to the crux of the album. On previous releases Grellier has delivered songs that have a poppy bounce to them with catchy hooks. These are sadly missing on Shanghai. The album is 15 tracks long, if a couple were removed they wouldn’t be missed. Also the majority of the tracks could be trimmed down/had their arrangements re-jiggled to deliver an album that is chocked full of ambient delight, but doesn’t drag. It's a shame as underneath all the slow production and slow burning aesthetics there is a great album slowly trying to get out.