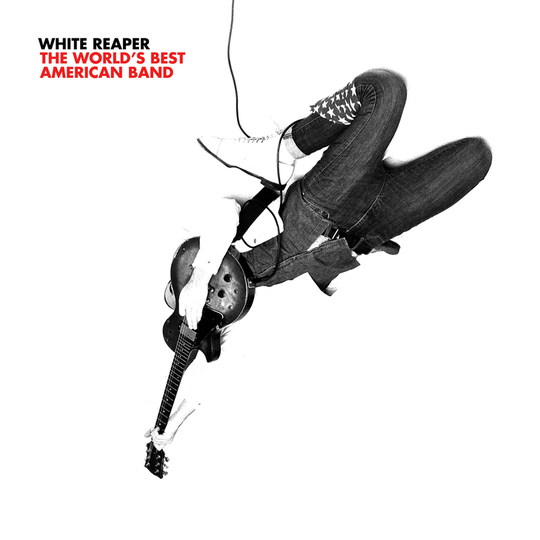 The World’s Best American Band is a title that might seem a little more prestigious in theory than it is when you actually comb the ranks of bands still making quality music today – at which point it sort of becomes like picking the best white American NBA player, insomuch as the production doesn’t necessarily match the name value. Still, if you think of Best American Band as less of a title to claim and more of a thesis statement then it’s hard to find a better distillation of what has made American rock great through the decades than White Reaper’s second LP, The World’s Best American Band.

White Reaper have successfully made the leap from garage lo-fi to a sharper sound that has been the undoing of a number of less compelling indie bands. Their sound feels more balanced and dynamic than ever, and lead singer Tony Esposito continues to show serious frontman polish.

Relentless touring has turned White Reaper into a must-see act, and it’s also helped them translate their unbridled energy to wax. There are few bands that do a better job of making you feel like their songs were recorded in one jolt of chaotic perfection than them. ‘Party Next Door’ is a perfect DIY sledgehammer, and the same goes for the album’s title track, which is one of very few songs I can remember where recorded applause and crowd noise actually enhance the listening experience.

Part of the joy of having The World’s Best American Band in high-fidelity is that you can not only hear the band’s influences more clearly, but also understand how they’ve been blended together to create such a momentously fun album. There’s plenty of glam rock flourish to ‘Judy French’ and ‘Crystal Pistol,’ while the dewy synths on ‘Little Silver Cross’ is classic new wave. The latter is gorgeous and ascendant; it could easily have been a War on Drugs track if played with a little more restraint.

‘Another Day’ is the closest thing to the band’s White Reaper Does It Again sound, with the entire track dipped by its heel in fuzz. It’s an absolute blast, but cast against the rest of the album shows just how much they’ve grown in the nearly two years since that album’s release.

The album’s themes are timeless, a nod to the enduring tropes of American rock and roll. The love songs are delivered with the same panache as the party anthems, and the lack of political commentary (and, frankly, stakes of any kind) only makes you want to live in its world even longer. The World’s Best American Band. is probably going to be the best pure party record you hear all year, and it’s a lot of fun to walk into the proverbial musty basement and see a boisterous band giving it their all instead of a cool, detached DJ mechanically fiddling with knobs.

In some ways, The World’s Best American Band is the pinnacle of White Reaper, a 32-minute crash course in the best of American rock music and why it still matters. But while it’s fair to wonder if they can ever top it, their growth from record to record indicates that they may indeed have another even higher gear.