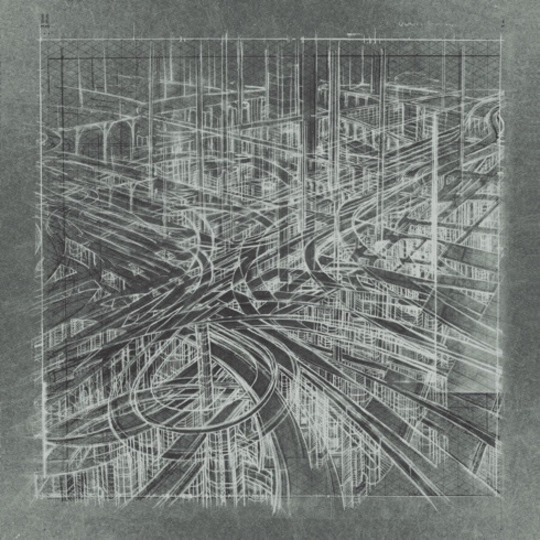 The Bug (Kevin Martin) and Earth (led by Dylan Carlson) have each spent over 20 years exploring sound worlds that – taken at face value – may seem incompatible. Martin has engaged most fully with the bass-heavy world of dub, embracing dancehall, hip-hop, industrial and reggae along the way. Carlson, meanwhile, became known through Earth’s transformation of doom metal through the prism of drone. In more recent years Earth’s sound has been further refracted through Carlson’s passion for Americana and folk musics, creating a sound as melancholic and haunting as early Earth records were crushing.

There’s a lot made, in the press release accompanying this album, of Carlson and Martin’s obsessional interest in the 'heavy'. What exactly this term means is, of course, up to the listener as much as it is either musician, or I for that matter. Allow me, however, to use my reviewer’s privilege to dismiss discussion of the 'heavy' from my remarks on Concrete Desert. To see this record in binary terms dictated by contrast – ultimately the defining factor of 'heaviness' – seems relatively unnecessary. Concrete Desert is far from being a heavy record. In fact, despite the toned down approach Earth offered on records such as the Angels of Darkness, Demons of Light duo, this might be the most “ambient” record Carlson has been involved in to date.

That is not to say that there are not moments of definite menace spread across the album. Opener ‘Gasoline’ actually feels rather like the build-up to an onslaught of spectral drone, but the tension subsides. The creeping bassline of ‘Agoraphobia’ is sublime and one could be forgiven – when it’s joined by a vaguely Morricone-esque Carlson guitar figure – for expecting it to push into deeper, darker territories, but again restrains appears to be the order of the day. Near the end of the record it’s the trio of ‘Don’t Walk These Streets’, ‘Other Side of the World’ and ‘Hell A’ that feel closer than anything else here to Martin’s catalogue, but they only tease at the arrival of a wall of bass, something they ultimately elect (wisely) not to deliver.

On the other side of the coin are Concrete Desert’s many moments of beauty. The lush intro to ‘City of Fallen Angels’, in which Carlson’s guitar is joined by widescreen synths, is a case in point. This encourages the impression, hinted at in the first three tracks, that the album might represent something new for each artist. Concrete Desert feels like a defiantly epic record and, despite its title, might belong more as a soundtrack for volcanic Icelandic vistas than brutal, grey cityscapes. There are echoes of the self-consciously cerebral fare of Pink Floyd here that seem to contradict the noir-esque aesthetic reached for by the album’s title. In fact, if noir is on offer here, then it’s that deployed by Vangelis on the Blade Runner soundtrack.

Like much of the glorious soundworld created for that film, however, little here feels strongly welded to permanent rainfall and the constant flash of neon lights. ‘American Dream’, which adopts the role of mid-album centrepiece here, is a case in point. Over its ten minute running time it appears to be hinting not in the direction of dystopia but instead in that of a crystal-tinged future that can only just be glimpsed on the furthest reaches of a stormy horizon. By the time the 14-minute closing title track rolls in, the listener may well feel like they are closer to that glorious, distant vision.

This rather undermines the notion of Concrete Desert as an exploration of the multi-faceted gloom purveyed by both Carlson and Martin over their careers to date. Concrete Desert may – for some listeners – be missing an excavation of the dark musical hearts of each of these two fine musicians, but what it offers instead is something tangibly unique in the catalogues of two legendary figures.