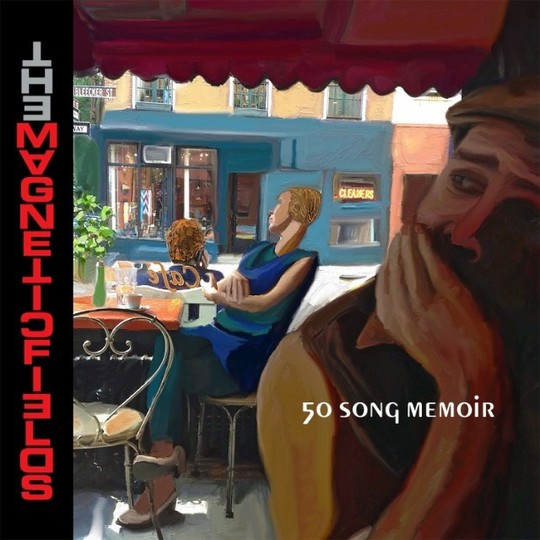 Stephin Merritt, in the liner notes to this, his eleventh Magnetic Fields album, says: 'I am the least autobiographical person you are likely to meet.'

And thinking about it, that’s true. His best-known work to date - feted 1999 album 69 Love Songs – was as much an exercise in explication of the art of the ‘love song’ as anything more intimate. And, in a sense, the series of concepts that Merritt uses to theme and group his releases (song-titles-beginning-with-the-letter-i, (i), noise music (Distortion), synth trilogies, non-synth trilogies etc) have always served as a means of distancing the musician from the music, an intellectual exercise rather than the kind of tortured confessional that other singer-songwriters might favour.

But now we come to the matter in hand: 50 Song Memoir. On one hand, it’s quite a typical Stephin Merritt concept: an album with one track representing each year of his life to date, to mark his fiftieth birthday. On the other hand, though, it’s a clear departure. A chance to get inside the head and history of the purveyor of some of the smartest, drollest, most poignant-slash-cynical lyrics of the last 20 years, to get a sense of his background, his formative moments, his influences and more – an irresistible prospect.

Of course, what you get, in fact, is nothing quite so straightforward as a narrative history of the artist. While some tracks are reasonably directly autobiographical – ‘68 A Cat Called Dionysis’, a cute tale about an unfriendly family pet, ’03 The Ex and I’ in which he revives an old romance – others are much more oblique, sometimes tantalisingly so.

He approaches the story of his mother from several angles, which combine to give a clearer picture than perhaps just one obvious song might do. In ’67 Come Back As A Cockroach’ we get a list of the kind of parental admonishments that were levelled at the one-year-old; by 1974, on ’74 No’ we get a funny/sarky catalogue of all her kooky beliefs (each one explained then followed with a dry “no”. “She says she ain’t no hippy / I guess beatnik’s the word”, he explains elsewhere (’75 My Mama Ain’t’). By his teens we get hints of the absent father, with a scene from 1979 that sees Ma Merritt taking her son backstage at a show in an attempt to show him that “Rock and roll will ruin your life / Like your old no-good-nik dad”.

In the particularly bile-filled ’77 Life Ain’t All Bad’ it sounds like Merritt is singing directly to this absent father (or possibly an unloved step-father?) as he deadpans “I hope I never run into / Another piece of shit like you”, going on to gleefully (or with relief?) sing “Na na-na na, you dead now”. Dark stuff.

From around 1985, of course, both love and sex begin to move up the agenda. In ’85 Why I Am Not A Teenager’ he bemoans the usual teen woes – “When you never get paid and you never get laid / And you’re full of these stupid hormones” but suddenly, abruptly, reminds us of the new peril that gay men began to face at this point: “And just then they come out with AIDS”. Oof. We get snapshots from what sounds like a ‘first love’, described in the odd, disjointed ’87 At The Pyramid’ as dancing “into my dream world / Bleach blond with caterpillar eyes” and a fun, chaotic-sounding menàge-à-quatre in ’93 Me and Fred and Dave and Ted’ – “All in two rooms with one bed”. “Ah, we were young and vaguely in love” he continues, sweetly, perfectly capturing the insouciance and anything-goes days of life and love in your twenties.

It’s tempting to try and forensically track the course of Merritt’s romantic life, in fact, as we get closer to the present day and a preponderance of break-up / get-back-together / heartbreak / fresh love songs come to the fore. Is this one major on-off love, or several different relationship being documented on tracks like ’04 Cold-Blooded Man’, ’05 Never Again’, ’09 Till You Come Back To Me’, ’11 Stupid Tears’ and ’13 Big Enough For Both Of Us’? Ultimately, does it matter? The sentiments come through clearly and relatably and, as Merritt himself rather disingenuously tells us towards the album’s end (on the elegiac ’14 I Wish I Had Pictures’) “I’m just a singer / It’s only a song / The things I remember / Are probably wrong”.

A key moment (from the year that Magnetic Fields started) comes when Merritt describes, on ’89 The 1989 Musical Marching Zoo’ what sounds like his idealised version of a perfect band: “Anonymous figures with animal heads … This is the band that I wanted to be / No names and faces and no history”. He is also very dryly amusing on his earlier, very first forays into music, when he describes his first band on the terrific ’78 Blizzard of ‘78’: “We made The Cramps sound orchestral / That’s an achievement, I guess / As for rehearsal / We made The Shaggs sound like Yes”. The laconic narration goes on to claim that this period of his life, living in a commune and making music with fellow teenage friends “was hell”, but the affectionate nostalgia is audible in the lyrics.

Of course, there is so much else in this densely-packed release to unpick. Merritt opines on different styles of music, with disco, noise rock, the New Romantics, synthesizers and more all getting name-checks. Religion and philosophy also feature (see in particular the quite wonderful ’86 How I Failed Ethics’, chock-full of Merritt’s genius story-telling, all set impeccably in rhyme).

Styles veer from synth bangers to lo-fi noise at will, so despite the length of the album it never even begins to feel ‘samey’ or over-long. Throughout, of course, those masterly rhyming couplets pop up time and time again to floor you with their wit, appropriateness and elegance. Another whole review again could be written simply quoting line after line, but their joys are probably best discovered in context with the music (hint: rhyme fans should, in particular, check out the tracks from 67, 68, 78, 86, 93, 00, 05 and 15).

So do you finish listening to 50 Song Memoir with a better sense of Stephin Merritt: the man? Yes, I think on one level you probably do. You will have learned that he used to hang out at Danceteria in the Eighties, that he has suffered throughout his life from a range of strange ailments, that his mother was an unconventional yet well-educated woman and that, like us all, he seems to have had his fair share of romantic ups and downs in his 50 years of life so far.

But this is an artist that reserves the right to still obfuscate and obscure. Along the way you will also have heard an emotional love song… to a bar (one of the album’s highest points, remarkably) and got confused by precisely who is who, and who might fit in where in the narration. But that’s good, right? Merritt has lifted the curtain JUST enough to draw us that bit more into his world, while still maintaining both his brilliantly singular world-view and style AND enough distance for us to look on in abject admiration.