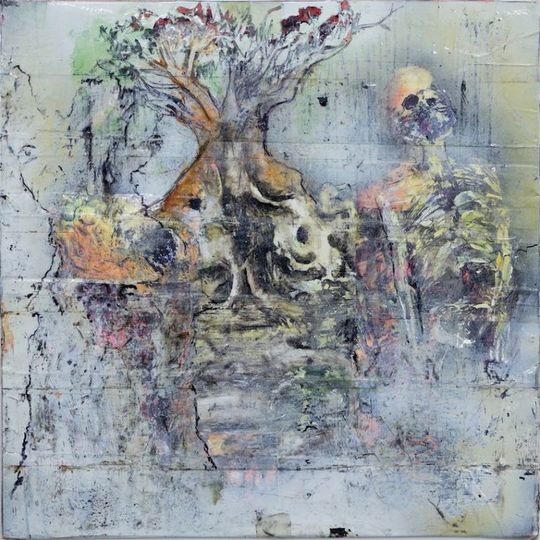 A new Wolf Eyes album is always cause for celebration. Not just because the trio of Nate Young, John Olson and Jim Baljo can usually be relied on to deliver the goods, but also because Wolf Eyes’ continuing existence and tendency for prolificacy is a welcome reminder that experimental bands can still carve out 20-year-careers even in the current musical landscape.

Not, of course, that everything in a discography as massive as Wolf Eyes’ will be to everyone’s taste. Whilst some thought 2015’s certifiably unhinged I Am a Problem: Mind in Pieces was something of a masterstroke, others bemoaned what they interpreted as a decrease in viscerality from the band. Anyone who’s seen Wolf Eyes live in the last few years will know that any such accusation is misleading. Wolf Eyes are no longer as jaggedly vicious on record as they were in their earlier days, but only because they have found more subtle ways to unnerve listeners. Undertow, the debut release on the band’s own new label Lower Floor, is a case in point.

There’s very little in the way of bowel-shredding sonic harshness here, but there is less of the restraint found on its predecessor. The titular opening track is thoroughly menacing, and the mood doesn’t let up throughout the following four tracks. To say Undertow is disturbing would be to misrepresent what’s going on here. This is Wolf Eyes turning a mirror on the grimy world around them rather than trying to goad their audience with unnecessary displays of nightmare trip psychedelia. The one short, sharp shock that this record provides – the exhausting, but sub-two minute, ‘Laughing Tides’ – is an outlier, but one that seems to reflect the sudden outbursts of chaos that afflict contemporary politics.

This is, after all, a band that offered their entire discography for 'Pay-what-you-want' download the day after Donald Trump was elected last November, encouraging donations for appropriate charities instead. Undertow recognises that the familiar can be the most threatening. The cult of misplaced celebrity and of misinformation that dominates America in 2017 is aptly subverted in the 13-minute-closer, ‘Thirteen’, which sounds like a crawl-pace Stooges jam gone badly, badly wrong. “I count every deceit, as they repeat”, Young spits at one juncture. The track as a whole is a deeply unsettling ride, building on the claustrophobic electronics presented in the earlier stages of the record by threatening to deconstruct them altogether.

If there’s one criticism that very much springs to mind this time around it’s that Undertow feels a little slight. Nobody expects a Wolf Eyes record to stick around too long, but aside from ‘Thirteen’ it does feel a little like this album could do with a tad more heft. Certainly, on early listens, it appears to lack some of the strange staying power of the band’s very best releases, as if there’s an indefinable something missing. As a result, this is unlikely to jar experienced Wolf Eyes listeners as much as it is newcomers. One can only hope plenty of new ears are drawn into the band’s orbit through this release.