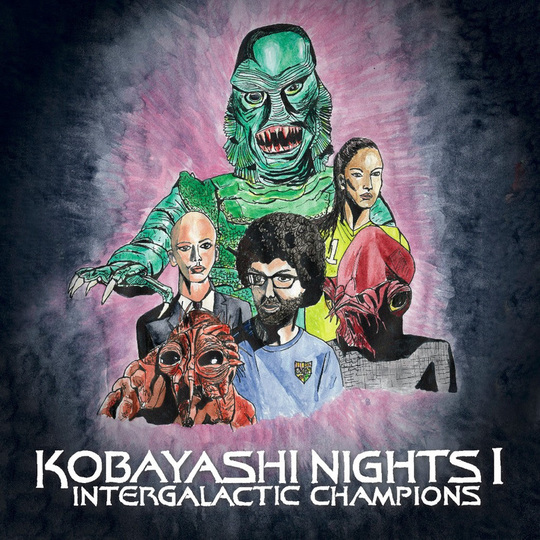 For a year Kobayashi Nights have been giving a home to London’s DIY scene. The club nights are full of local favourites, as well as names you’ve never heard of, but the result is always the same. Great music and an even better time. What better way to celebrate this year of ramshackle debauchery than by putting out a compilation of the best bands to have played it? Kobayashi Nights I: Intergalactic Champions is 35 minutes of future indie, post-rock meditations and DIY scatter shots. It shows a snapshot of a very vibrant and diverse musical landscape, and more importantly, is a hell of a lot of fun.

The album opens with a slice of electro indie from Mega Emotion. This three-minute-disco-synth-pop banger is the ideal way to start the album. Its infectious beat, coupled with searing keyboards, bores into your brain and makes you want to get dolled up and head out for a night of dancing.

After this opening salvo the rest of the album falls under the post-rock, DIY/lo-fi and indie-pop banner. Band likes Brunch, Megaflora – sounding like a more urgent and aggressive Los Campesinos! –Garden Centre. The Jeals' ‘Amateur Noun’ is chaotic and feels like right notes are being played but in the wrong order and sequence so everything has an off-kilter movement to it. Just Blankets' ‘Polydactyl’ is anthemic and channels Weezer to the point of making you want to sing along and form a little pit. Mardemarmo offer up a slice of melodic post-rock. As it slowly meanders along hypnotic riffs pull you this way and that before knocking you down with a blast of visceral power.

‘Paywall’ by The Ethical Debating Society is a dose of spikey, riff heavy power pop that is hard to ignore. Experimental duo Carl White throw one-and-a-half minutes of shambolic, jazz time signatures, demonic harmonies into the mix. It is previously unreleased and totally incredible! The stand out track is Dog Chocolate’s ‘Wish For a Cat (Demo Version)’ the music is at time a seething messy mass of angular guitars, blazing feedback, ad-hoc indie disco and indecipherable lyrics. In short it sums up every club night taking place up and down the British Isles, and probably everywhere else, on a Saturday night. There is danger that the music will escape from your speakers and start smashing up your place, just like there is a real threat that the band might fall off the stage and start playing in the middle of crowd. The highlight it when the same note is played over and over again, before an a capella refrain before the track descends into scrappy seething mess. Its short it’s just under three minutes of life-affirming brilliance!

Given the strength of this compilation you get the impression that a second edition next year isn’t an impossibility. In fact it feels like this could be the start of something great, something to look forward to each year, like the original NOW albums when I was a kid. With a little digging and perseverance each band could very well become your new favourite obsession. And isn’t that what you want from a club night?