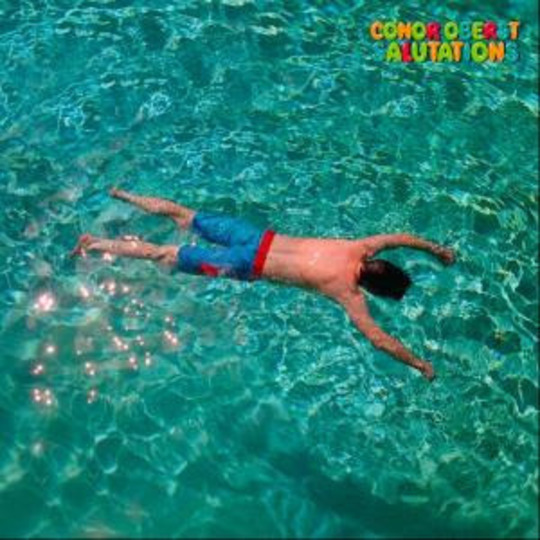 I’m sure there are some Conor Oberst fans who feel mildly dismayed - some perhaps affronted - by the release of Salutations. Billed as a 'companion piece' to last year’s sparse, superb Ruminations, it features every song from that record in full-band iteration alongside seven new numbers.

Thing is, though, Salutations is an absolute treat. What’s more, it makes for a completely different kind of listening experience from Ruminations - quite the achievement, given that over half of its songs can be found on the earlier set. Where that collection of songs was so stripped-down as to sometimes be uncomfortable, this one is bathed in warmth; all fuzzy, blown-out speakers and production equal parts lush and scrappy. Ruminations was solitude in the frozen Midwest, the product of a bleak Nebraskan winter; Salutations was recorded by a tight group of friends and musicians on the balmy coast of California. Right down to its silly typography, sun-drenched artwork, occasionally flipped lyrics - and most obviously its title - it is the inverse of Oberst’s 2016 set in every way, and it succeeds both as that record’s sunnier, more outward-looking counterpart as much as it does on its own terms: as a collection of vibrant, fantastic songs.

The sound of the record is really something. Co-produced by the singer and Jim Keltner - who occupies Number 38 on Rolling Stone magazine’s 100 Greatest Drummers of All Time and is named by Oberst the project’s 'spiritual leader' - Salutations features a raft of contributions from Oberst’s ever-expanding cadre of collaborators, including backing vocals from Jim James, Maria Taylor, Gillian Welch and Pearl Charles to turns on the guitar from M. Ward, Blake Mills and Jonathan Wilson. Members of the Section Quartet provide strings, and all involved work off a sturdy rhythm section made up of Keltner himself and longtime friends of Oberst - who also happen to be his favourite band - the Felice Brothers. The LP comes alive on headphones, wherein the delicate interplay on ‘Gossamer Thin’, the sandpaper crunch of ‘Overdue’, the loose, billowing propulsion to ‘Afterthought’ - or any number of examples, really - make for a sound that is addictively different from anything in Oberst’s catalogue thus far.

Perhaps as a by-product of being largely made up of songs a lot of fans will already be familiar with, its generous running time (17 tracks weighing in at nearly 70 minutes) feels just about right rather than overlong. Introspection is wrought via tunes like the breathtakingly lovely ‘Mamah Borthwick (A Sketch)’, ‘Next of Kin’ and ‘Rain Follows the Plow’, while ‘A Little Uncanny’ and ‘Napalm’ feature the kind of righteous, withering sarcasm that would fit right in on a Desaparecidos album. Though it opens and closes with intent, Salutations makes sense in just about any order in which you care to listen to it, and counts some of Oberst’s finest songs in recent memory among its number.

‘Empty Hotel by the Sea’, a deft character study of the kind Oberst is becoming increasingly adept at, is one of those songs. A compelling, evocative thing, it comes on like a darker Coen Brothers offering or a frazzled Denis Johnson short story compressed into four and a half minutes, replete with sometimes beautiful, often violent imagery and a denouement that, for all its inevitability, hits like a gut punch. ‘Overdue’ is a belter too, Oberst cataloguing the increasingly desperate goings-on inside a drug den in a manner that recalls songs like John K. Samson’s ‘17th Street Treatment Centre’ and the Mountain Goats’ ‘Lakeside View Apartments Suite’ in its frank acknowledgement of addiction. That’s not to mention the Ruminations tunes, all variously burnished by strings, accordion, surges of noise and twinkling electric guitar.

Since 2005’s I’m Wide Awake, It’s Morning, music critics have been keen to point out Oberst’s supposed newfound ‘maturity’ with each subsequent release, in what seems to me fairly lazy shorthand for the fact that artistically he never stays in the same place for very long. There are constants, sure; in a recent Talkhouse podcast featuring the singer and the National’s Matt Berninger the two discussed various elements of how they approach the art of songwriting, Oberst noting how he would always rather take a risk on a line that might later prove embarrassing if it feels right and fits the emotion of the song.

That says a lot about the type of honesty he strives for, I think. It’s perhaps what sticks in some listeners’ craws, too, but that creative restlessness, that unabashed sincerity - and that willingness to go out on a limb - is what makes his music so relatable, and often so special. Salutations is full of songs that fit that mould, whether they depict bereavement, substance abuse, anger at the status quo or simply offer hope in the form of human connection. It’s the sound of a gifted songwriter comfortable with his craft and in his own skin, offering glinting new facets to earlier sounds and the songs present on Ruminations, and it makes for a subtle, yet striking departure from everything that came before.