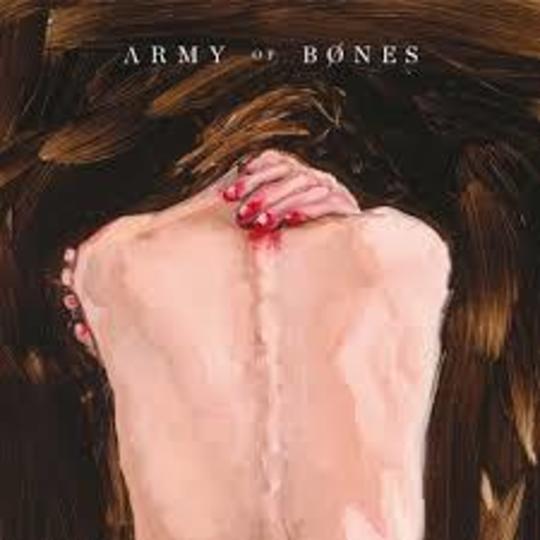 Brighton continues to stamp its authority on the UK rock scene. Hot on the heels of Tigercub’s splendid entry into the City’s unofficial (presumably) band of the season competition, arrives this barnstorming debut from Army of Bones. It's an album so painstakingly and beautifully constructed, it simultaneously feels like the surest of opening statements and gives a tantalising glimpse of the wonders and glories that could follow on paths yet to be trodden.

This is a searing, honest collection of songs. At times, the tension in the atmosphere conjured by the combination of the cracks you can hear in the vocals of Martin Smith and the words which are causing those cracks is almost unbearable. “I’m gonna love you like I know I should love you, but we’re tearing apart”, he sings on ‘Break Away’, which is otherwise a thoroughly jaunty slice of indie rock with a ferocious guitar turn from Jonny Bird. On ‘Do You Love Me?’, he repeats the title’s question with increasing desperation as the song reaches a powerful climax. He’s not sure, it seems. Neither are we. And in an entirely sincere way, it starts to be a concern. Only the best music makes you care about those who have made it. This album achieves that feat.

Put simply, Army of Bones are purveyors of great songs. The album is stuffed with them. In fact the opening quartet of tracks on this record is better than any you’ll hear all year. You can quote me on that. Opener ‘Don’t Be Long’ grows from a single guitar line, builds to a glorious climax on the back of the drums of Reuben Harsant before falling away. ‘Dead In the Water' is thunderous. I defy anyone not to be enthralled by its chorus. The aforementioned ‘Break Away’ is next. A better pop song you’ll do well to hear. It is followed by ‘End of Time’, which outdoes its forebears with the sense of lift-off and joyous abandon which comes with its ‘I love you till the end of time, I love you till the sun goes down’ refrain. The guitar break here is simple yet so wonderfully effective, one of many examples of the calm mastery Army of Bones exhibit in their song-craft.

The pace slows somewhat for emotive mid-album triumvirate ‘Love Song For a City’, ‘Do You Love Me’ and ‘Ecclesiastes’. The former is the kind of song that it is easy to imagine finding potent placement in a film or TV drama in the years to come. In fact the same could be said of all three. On their own these are good songs, but run together they slightly lessen the album’s momentum.

That momentum is picked up exponentially by the one-two punch of previous single ‘Batteries’ and its B-Side ‘River’ which follow. They pack the kind of punch that is often longed-for but rarely supplied. Helped by a storming mix, the buzz-saw guitars of ‘Batteries’ are a real album highlight, whilst ‘River’ manages to feel satisfyingly dirty whilst centring on the lyric, ‘there’s a river and it washes me clean’, quite a feat.

The record’s closer, ‘The Day The Fire Went Out’ encapsulates everything that is so vital and exciting about Army of Bones. “I know this is hard and I know I’m to blame, but I’ll walk through the flames just for you….so please, please don’t let the fire go out” pleads Martin over a welter of synths, a taut rhythm section and layer upon layer of swirling guitars as this short, sharp blast of precision-honed modern rock draws to a close. This is one of the most assured and crucial-sounding debut albums of recent memory. And I bet this is the first you’ve heard of them too. See what you’ve been missing out on?