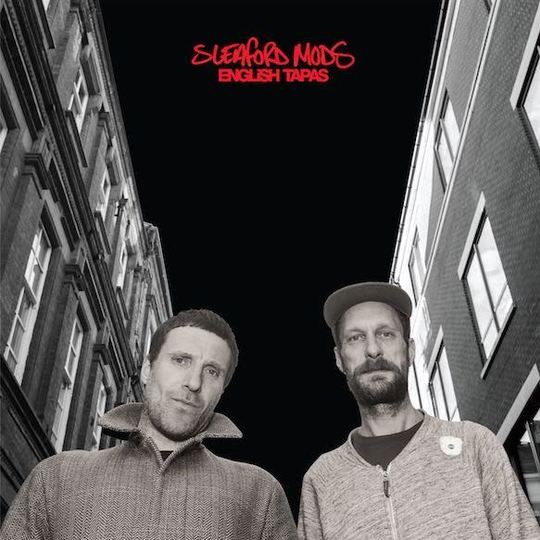 The lord Mark E Smith once uttered the phrase “Repetition. Repetition. Repetition”. Since these precious words left the lips of Salford’s greatest son many groups have adopted his philosophy with their musical output. None more strictly than Nottingham’s very own Sleaford Mods. The down-and-out-punk-rockers have forged a career on bass loops and vocal snarls that make The Fall's rattlings sound like freeform jazz in comparison.

When they stumbled onto the scene with their first major release in 2013, Sleaford Mods were a breath of fresh, if phlegm-scented fresh air. Who would have thought the world needed a civil servant ranting over some computer bleeps and bloops? Austerity Dogs, Divide & Exit and 2016’s Key Markets firmly established the group as the gnarly leading lights of British punk rock. Their sound was familiar, yet fresh, and the aggression set them apart from a music scene hell-bent on pushing an escapist dream. With this in mind, their tenth record, English Tapas shouldn’t be anything other than truly exceptional. There’s more to be pissed off about now than ever, all they really have to do is just crank out more of the same, and everyone will be happy.

Well, you’d think so. However, right from the get go it’s apparent that the group’s act has got more than a bit stale. Opener, ‘Army Nights’ comes across as nothing more than some sort of poor Crass tribute. It’s all mardy snarls and lo-fi snare rattles, you know the drill by now. Saying that, there is a slight change in sound. Frontman Jason Williamson attempts to sing. That’s right, you read that right. Sing. It’s safe to say it doesn’t end particularly well.

The repetition wears thin early on. Unlike their other releases, there’s a real lack of memorable moments on English Tapas. While they’ve never been they types to pen a killer pop hook there has always been a tune or two hidden deep beneath the nihilism. ‘Moptop’ plods along with no real purpose and ‘Time Sands’ just sort of exists. While there is nothing particularly bad about any of these tracks the fact that they don’t provoke any sort of reaction proves that the group may have drained the repletion well…

With song titles like ‘Drayton Manored’ and ‘Carlton Touts’ Sleaford Mods are almost becoming a parody of themselves. Saying this, perversely it’s on these tracks that some light finally shines through. ‘Drayton Manored’ in particular hints at a more surreal sound. All of the classic Sleaford Mods ingredients are there, but somehow it all sounds a bit surreal, like they’ve been abducted by aliens, or The Residents.

Unfortunately, the plodding repetition soon rears its ugly head again, and stays for the duration. Finale ‘I Feel So Wrong’ signs of the record by taking us on a journey to nowhere, looping around and around inducing a migraine at the front of your furrowing brow, one piano stroke at a damn time.

English Tapas proves the seemingly unprovable. Mark E Smith might have been wrong about the whole repetition thing. Sure, it can be great. I guess it just depends what you’re repeating.