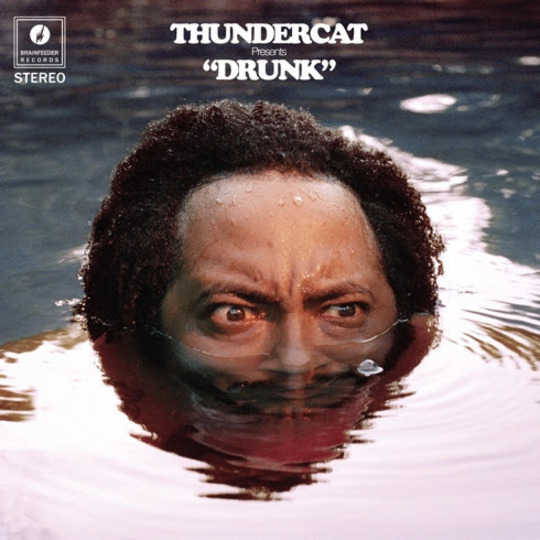 Thundercat, aka Stephen Bruner, is at quite a pivotal moment in his solo career. After years of notable solo and collaboration work, he's grown a cult audience across the world, getting bigger and better with everything he's touched.

There has never been any doubt over his musical ability, ever since his wider introduction to the hip-hop/indie/electronic music conscious with his work on Erykah Badu's New Amerykah Parts One and Two and Flying Lotus' Cosmogramma, in 2008 and 2010 respectivelyt. Even his prior work in the jokey yet supremely talented pop-punk band Suicidal Tendencies throughout the Noughties wouldn't surprise anyone aware of his talents what he was capable of.

As a solo artist, however, it has been a slow build for Bruner. His first two solo albums The Golden Age of Apocalypse (2011) and Apocalypse (2013) saw Bruner unleash his psychedelic jazz stylings improve over the course of what could easily be conceived as a double album which got more confident as he progressed but not always so consistent. Both albums showed Bruner's potential and knack to blend a beautiful melody with his incredibly complex playing style without being overbearing, such as the still breathtaking 'Heartbreaks + Setbacks' from Apocalypse. Similarly, while his albums dealt with some personal anguish - the latter ends with a beautiful ode to his recently deceased friend and musical compadre, Austin Peralta - he also showed his keen sense for not always being deadly serious, allowing his dark sense of humour to prevail on tracks such as his disco-party jam 'Oh Sheit it's X'.

However, in the interim, it seemed Bruner had got serious. 2014 onwards saw an incredible run of form for the enigmatic bassist, working on (in order): Flying Lotus - You're Dead!, Kamasi Washington - The Epic - and Kendrick Lamar's To Pimp a Butterfly for which he received a Grammy. Meanwhile, Thundercat released by far his most consistent and serious work, his 15-minute mini-album The Beyond / Where the Giants Roam working with Jazz legend Herbie Hancock in the process. As well as being a critical and artistic success, the record also scored Thundercat's biggest single to date 'Them Changes'.

So understandably, there is now some hype surrounding his first proper solo album in nearly four years. At first, Drunk is quite disorientating, given Bruner has very much reconnected with that sense of humour. When opening (and closing) segment 'Rabbot Ho' (later 'DUI') segues into the first proper song 'Captain Stupido' we get a picture going Bruner going through everyday, mundane life in a with a sense of "feeling weird" - with a title giving you everything you need to know. Then, before you can catch your breath, Bruner runs through Jazz-Fusion jam 'Uh Uh' on to Phil Spector-esque 60s Motown number 'Bus in These Streets' all in the space of the album's opening 6 minutes.

Once the album calms into Thundercat's trademark groove in 'A Fan's Mail (Tron Song Suite II)' - a song in which, between meows, Bruner wishes he was a cat, no really - it's fairly obvious this isn't going to be your straightforward listen. Over the course of 50-minutes and 23 tracks (though only a handful gets over the three-minute mark) Bruner is leading us into the dark psyche of his mind. After a little while, one realises to pay attention to the album's title - something Bruner has confirmed in interviews - this is an album about the many strange facets of being intoxicated.

This isn't the first time Thundercat has sung about this, aforementioned 'Oh Sheit it's X' is a prime example, but after this disorientating journey, we realise this is now Bruner's way of giving himself the freedom to sing about whatever he feels. For instance, 'Lava Lamp' is an absolutely gorgeous, heartbreaking R&B track akin to to the great 'Heartbreaks + Setbacks', while next track 'Jethro' sees him consider his mortality in one of the record's standouts, but coming straight after a track about yearning to be a feline, it takes a little time to get used to Bruner's sense of humour. Part of the thrill of 'Drunk' is never really knowing where Bruner is going to take us next, whether it is exploring the streets of Tokyo or concerns about racial profiling, Bruner has managed to find the balance between the absurd and the dramatic in a balance he's never quite mastered until now.

Equally important is that Thundercat is no longer the solitary voice of the album (though he is the majority of it). For instance, Bruner gets to work with two of his cited 'greatest influences and heroes' in Michael McDonald and Kenny Loggins on the first single 'Let Me Show You' in a classic soul-filled ode to his musical heritage. Meanwhile, Kendrick Lamar, Wiz Khalifa and Pharrell Williams all drop in to make sporadic appearances and while none really bring their A game, they are all necessary breaks in amongst Bruner's longest record to date and show how hip-hop has also become more of an influence this time around.

Not everything works here, the final third sags a little, but then how could it not on a record of this size and scope? There are some throwaway moments here and there, but none outstay their welcome given many of these tracks are short sketches. Strangely enough, the biggest surprise and almost disappointment is to find 'Them Changes' lodged deep into the album right after the excellent current single 'Friend Zone' - a song which largely sums up Bruner's myriad modes and thoughts across this record. Of course, 'Them Changes' is an excellent song, arguably one of Bruner's best to date, but it's questionable if this two-year-old song really needed to feature on this hugely wild and ambitious album - other than perhaps the cynical reason of getting Kamasi Washington's name onto the record - and feels ever so slightly out of place here.

However, this is a minor quibble given the album's strengths. Altogether, despite being maddeningly silly in places, the humour is always dark and tied or paired with personal, moving moments which keeps Drunk (just about) grounded. Bruner/Thundercat has tamed (to some extent at least) his scope and ambition through his various influences and thoughts to make his third full-length album a joyful, crazy, substance-fuelled epic in an area where most of his contemporaries would take themselves endlessly seriously. Here, Bruner has harnessed all that into maybe his best record yet.