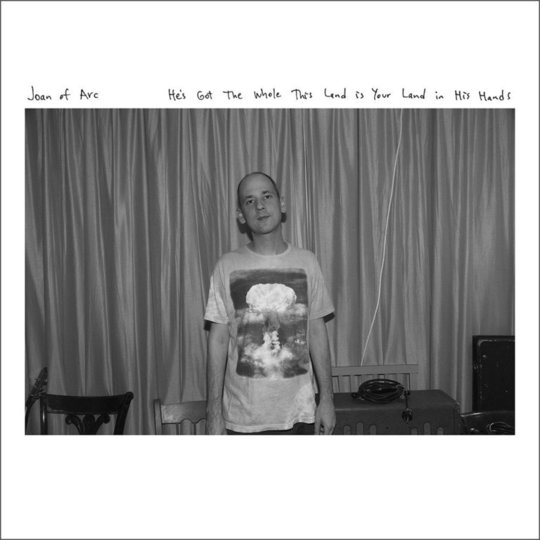 It’s hard to avoid the creeping feeling that, for one reason or another, the recent wave of emo nostalgia hasn’t been especially kind to Joan of Arc, who don’t seem to have been remembered as fondly amongst the retrospectives as contemporaries like American Football or, indeed, predecessors where Tim Kinsella’s concerned - Cap’n Jazz, for instance. On the face of it, that shouldn’t come as too much of a surprise; Joan of Arc were never the easiest band in the world to like, and at times it felt like Kinsella used it as a vehicle simultaneously for both his most awkward musical ideas and lyrics that bordered on misanthropic at times, usually being presented through the prism of his decidedly off-beat sense of humour.

After all, it’s not as if there isn’t compelling evidence in recent years of Kinsella being more than capable of screwing on his serious head, especially on the unlikely second Owls album Two in 2014, the accessible nature of which was as disarming as the fact that it even got made in the first place. There was an argument, too, for the last Joan of Arc album, 2011’s Life Like, being a considerably less belligerent piece than some of what had gone before, with a few of the past edges - both sonic and thematic - softened and many of Kinsella’s past instrumental flourishes, like his penchant for electronics and sampling, stripped away.

This follow-up to Life Like, described in the press release as Joan of Arc’s 'hundredth full-length album', is by no means the most caustic or difficult record the band have made from a musical perspective, but sees Kinsella crank up the warped lyrical perspective to record levels. He’s Got the Whole This Land Is Your Land in His Hands runs the gamut in terms of its sonic landscapes, which is possibly a reflection of the fact that it was recorded on the fly across a number of locations in the band’s native Chicago. Opener ‘Smooshed that Cocoon’ brings the curtain up messily behind a wall of reverb, and you’re right there with Kinsella when he croons “what the fuuuuuuck?” about half way in.

The band have gone back to electronic experimentation here but there’s moments where it really comes off for them, particularly ‘Full Moon and Rainbo Repair’, a softly brooding affair that combines looped feedback with a uncharacteristically reserved turn from Kinsella. ‘Cha Cha Cha Chakra’ goes for a similarly downbeat tack, bringing in some menacing piano, and if there’s a stylistic throughline on the album, it comes with the sort of funk-flecked percussion that runs under the likes of ‘Two Toothed Troll’ and ‘Never Wintersbone You’ - albeit in very different ways.

Elsewhere, Kinsella’s fluctuation between daft-but-harmless lyricism - “one heroic act of passivity is finally gonna open that fish” is one cut from the first track - and lines that leave a bitter taste in the mouth only adds to the sense of discomfort that the album’s more confrontational compositions summon up. “I know how the nicest guy in ISIS feels” is delivers in sing-song fashion on ‘New Wave Hippies’, whilst ‘Grange Hex Stream’ is positively nihilistic and ‘Stanged That Egg Yolk’ comes complete with a promise to “kill the little Hitler inside my heart.” On closer ‘Ta Ta Terrordome’, meanwhile, we get an exercise in high-school surrealist poetry that seems only to serve to bookend the album in the same chaotic fashion as it started.

He’s Got the Whole This Land Is Your Land in His Hands is by no stretch of the imagination the most disagreeable Joan of Arc record to date, or the most impenetrable, either; some of the soundscapes here are pleasingly smooth given how scattershot Kinsella’s approach so often is. It’s a nudge back towards out-and-out eccentricity after Like Like, which very much felt like ex-Cap’n Jazz man Victor Villareal’s album. That should satisfy long-time devotees (and there are some); on either side of the divide, though, this LP is not likely to shift anybody’s opinion of Kinsella too far in either direction.