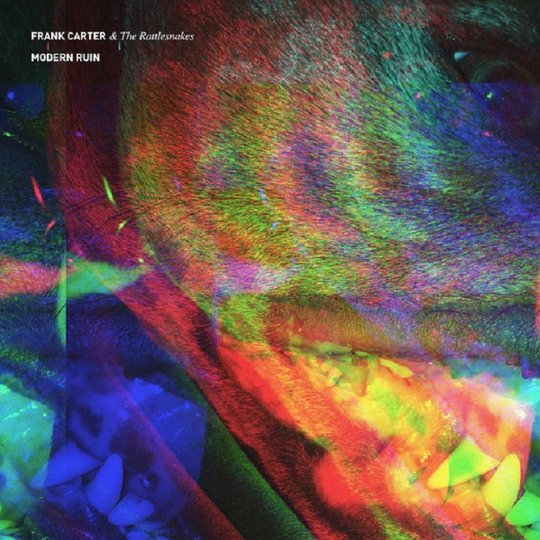 Frank Carter has long been hailed the crown prince of the latest wave of UK punk, ever since he exploded into the public consciousness as the rabid and respected frontman of Gallows on their 2006 debut Orchestra of Wolves.

Through various incarnations, it became apparent that there was much more to Carter than many gave him credit for. Hidden depths and musical leanings that couldn’t be catered to by Gallows’ abrasive and macho brand of hardcore punk eventually saw him parting ways with the band, citing musical differences after their somewhat sanitised major label effort, the ambitious but flawed Grey Britain.

Returning in the guise of the more mainstream leaning duo of Pure Love, the pair’s playful approach to rock and roll was a refreshing peek into the psyche of one of the most explosive and intense frontmen of his generation.

His latest project Frank Carter & The Rattlesnakes find their second album Modern Ruin lingering somewhere uneasily between the two projects. There’s the audible edge and sense of danger that made his time in Gallows so notable, and there’s the musical experimentation and depth that found him fans through Pure Love’s efforts.

The one major criticism that inescapably must be levelled, and unfortunately it is a major one, is that this record is just so forgettable. For a man whose on-stage presence is an affirmation of life, red in tooth and claw in the rawest sense, musically speaking, Modern Ruin is a dull listen. It’s an album which is almost lacking in a stand out track – it’s unavoidable, it’s unforgivable, and it’s a damn shame.

As ever, Carter remains utterly captivating in a live setting, with the kind of mesmerising eyes and wry smile that could charm the birds from the trees and incite mass riots, but ultimately he’s still yet to prove himself as a songwriter with this outfit.

Lyrically speaking there’s always a darkly poetic strain to enjoy in a Carter-penned missive. He has something of the timeless melancholy of Tom Waits about him, the grinning devil who knows his own sins will find him, epitomised by the brutally candid “send me to hell, it’s where I belong” on ‘God Is My Friend’ which ultimately collapses in a wonderful hiss of static and feedback.

Elsewhere it’s difficult to tell whether the pleading line “I don’t want to live in the shadow of the mountain no more, I’m sick of being hidden in the darkness” on ‘Vampires’ is a sub-conscious reference to Carter’s own public persona or some exterior influence, but a listen to the record leaves the distinct impression it could easily be both.

With his previous work, it was easy to see how his whirlwind-of-daggers approach to his music was at once immediate, startling and riveting. It’s difficult to avoid the nagging suspicion that through Gallows, the Frank Carter we know to be a charming, intelligent and thoughtful man was locked in a struggle with a beast that he could not always control. In subduing and possibly internalising his animalistic anger and youthful vigour, the introspective search for his new identity is yet to bear any real musical fruit - “I’m so lost in the feeling that you have stopped believing, and I am finally nearing the end” he extols on the aptly titled ‘Real Life’. The title-track, ironically, is as close as this record gets to ever reaching maximum velocity and is, it must be said, a raging polemic that drips with the rattlesnake venom that the rest of the record leaves you craving. This is where Carter excels, it’s where he belongs, but the question is, is it where he wants to be?