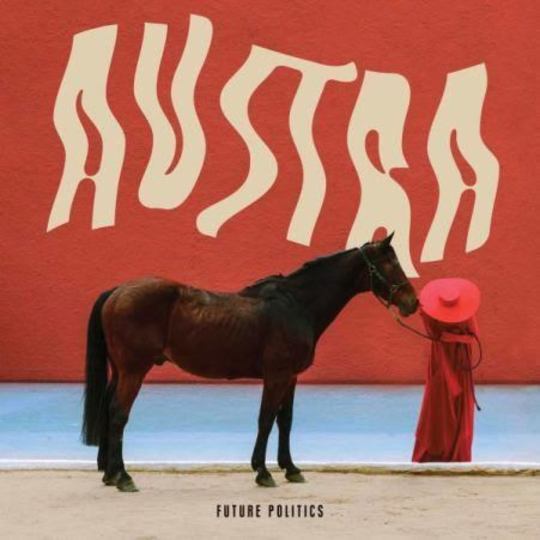 One of last year’s biggest signifiers of how far humanity hasn’t come was the election of a proudly racist, misogynistic, billionaire celebrity, flanked by a cabinet of far right horrors, as President of the most powerful country in the world. And, as we all know, he is but one face of the snarling, brutal, multi-headed Cerberus that is contemporary global politics. Imagine being a musician who is able to escape from the ghastly reality of modern times into music? To flee from scenes of the world burning on your screen and use music to create some kind of alternate reality, to hide in it? No, me neither. It generally doesn’t work that way and —Bono and other self-appointed great white saviours notwithstanding— thank god. We need artists who don’t turn their faces from the dystopian future in which we are already living, but grab it by the throat.

Whilst Austra are a Canadian band, I mention Trump because the group’s third album Future Politics comes out the day of his inauguration, a coincidence, but a timely one. Much of the album was written during a period of self-imposed isolation for lead singer and songwriter Katie Stelmanis during a time of mourning for, essentially, 2016. The result is Austra’s most political and album to date and also one that contains some of their most danceable songs. Urgent claustrophobic beats and luscious synths meet lyrics that touch on personal vulnerability, political grief and hope for something better.

The album begins with ‘We Were Alive’, which slowly sets the tone by way of synths and beats that combine a sense of gentleness with darkness and urgency, Stelmanis singing, “I know I believed in nothing before”. Stelmanis’ stunning operatic vocals resonate with sadness and loss, but they also send shivers through the body and communicate something language cannot. It’s the same throughout the album; it’s the same with most Austra songs.

Singles ‘Future Politics’ and ‘Utopia’ are danceable bangers. Think going to a club but instead of ludicrously overpriced drinks, narcissistic posers and sexual harassment you are left with the feeling that, with others, you might begin to look the tragic hell humanity has wrought itself squarely in the eyes and begin to confront it. And no, you didn’t do MDMA. ‘Future Politics’ celebrates community and resistance in the face of power that cares nothing for the people it’s meant to serve: “The system won’t help you when your money runs out . . . The grave has been dug/I’m looking for something to rise up above”. ‘Utopia’ sets out a vision of hope but without being free of doubts or blind to complexity, it feels real and human: “It might be fiction but I see it ahead/There’s nothing I wouldn’t do”.

Whilst it has its hopeful moments, there is much darkness in Future Politics. On ‘I’m a Monster’ ominous synths, rise and swirl and lyrics gesture to falling apart: “There must be more to life than this . . . I try try to keep my head on straight”. ‘Gaia’ is named after the Earth Spirit of Greek mythology and longingly laments a planet decimated by human destruction with its refrain of “undo the damage”. Future Politics closes with ‘43’, a track harder, darker and more minimalist in sound than the rest of the record. In contrast the gorgeous ‘I love you more than you love yourself’ opens with the lines, there is nothing in your soul tonight/I only see darkness, but the synths are so lush and Stelmanis's voice so otherworldly these words sound comforting.

Future Politics is political, danceable, dark, shimmering and hopeful. Not a combination easily achievable, but Austra have never been a normal band. Utopia might be fiction, but Future Politics is real, beautiful, necessary.