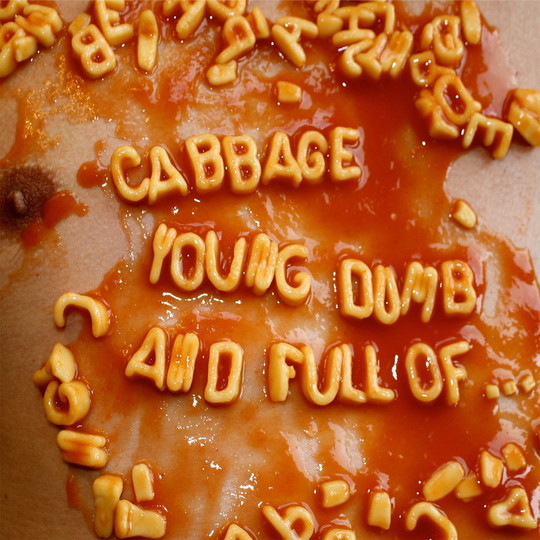 Space Raider crisps and Buckfast for everyone might not be everyone's manifesto, but here and now as the monstrosity that was 2016 turns into the (hopefully) better 2017 it sounds perfect. Which is just as well because the most notable entities to come out of Mossley since Dave Mobley think so too.

Ah, Cabbage. The band with the name that doesn't just divide opinion but makes Marmite taste like sugar in comparison. Despite existing little over a year, they've garnered a reputation as the most exciting new band in the UK through a combination of relentless dedication and sheer hard graft. Having played well over a hundred shows in 2016 they've earned those plaudits and while a weight of expectation has been placed upon their collective shoulders thanks to almost every media outlet in the land tipping them as everything from 'ones to watch' to that tired old chestnut, 'saviours of guitar music', there's far more here to get excited about than meets the eye.

Granted, those live performances are undoubtably responsible for spreading the band's name far and wide but if they didn't have the songs to back up such acclaim they'd soon fade away into obscurity. And Cabbage have them in abundance as anyone that's heard much of their output can testify.

They're also one of the most socially and politically aware outfits to emerge from these shores in a very long time and unlike many of their peers when raising their musically dominated heads above the political parapet manage to avoid the cringe factor at all costs. Austerity, the NHS, the Royal Family, war, Donald Trump and Kim Jong-un are just some of the subject matters contained within their songs. When they're not singing about the wider world their native city of Manchester comes under scrutiny. And when they're not making music they're launching no holds barred tirades against Rupert Murdoch and The Sun. Even the name 'Cabbage' says more about their malevolence when it comes to identity. This is art terrorism at its finest, make no mistake about that.

From the 'Cock, Piss, Cabbage' slogan emblazoned across Asa Morley's drum kit to the title of this compilation, Cabbage have hit the ground running in more ways than one and clearly mean business. Whatever that implies. Young, Dumb & Full Of... collects the 12 songs off their last three EPs (Uber Capitalist Death Trade, Necroflat In The Palace and Terrorist Synthesizer) and while not exactly intended as an album as such, it highlights their lyrical dexterity and way around a tune or three.

Musically primitive yet effective in a similar vein to The Fall, Fat White Family or the Black Lips. Cabbage aren't here to bludgeon people to sleep via ten-minute guitar arpeggios (although closing track 'Because You're Worth It' clocks in at just under nine minutes). Instead, their modus operandi consists more of the short sharp shock variety. Anti-war opener 'Uber Capitalist Death Trade' sees vocalist Lee Broadbent deliver lines such as "I wanna fight for my country, just like the old boys and Nazis" like a young Jello Biafra over scattergun punk rock both the aforementioned Fall and Fat Whites would be proud to call their own. 'Free Steven Avery (Wrong America)' similarly pulls no punches, its chorus veering from "It epitomises everything that's wrong with America!" to "Death to Donald Trump, there's something about politics in America" over a melody whose origins probably lie in Nashville.

'Necroflat In The Palace' might be the first song written about having sex with dead bodies in Buckingham Palace but even then, Broadbent and fellow vocalist Joe Martin proudly proclaim "I was born in the NHS, I wanna die in the NHS!" even if the song's underlying theme suggests something much more sinister. 'Tell Me Lies About Manchester' dismisses the city's past glories in just under seven minutes flat as Broadbent and Martin swap couplets ("I've had a pint with every person who's ever played in The Fall") before imploring "Coat my eyes in voodoo rays, fill my ears with the Hacienda classics, stick my legs in Joe Bloggs flares" and thereby crushing the Madchester myth in one chorus.

'Fickle', 'Indispensable Pencil' and 'Dissonance' continue the ramshackle garage vibes as does the penultimate number, a cover of Nancy Sinatra's 'These Boots Are Made For Walkin'', a song that's already been given a punk rock makeover courtesy of Pure Hell and The Meteors respectively. When Cabbage show their more restrained musical nuances as on 'It's Grim Up North Korea' ("I'm emigrating to the north of Korea") or their ode to David Cameron 'Terrorist Synthesizer' ("I'm a liar, shoot me mother") they're no less acerbic verbally.

What you have here is the majority of the band's current live set and while the production might be a little too lo-fi in places, its all of their own doing which is as DIY as it gets. If you already own these EPs (and indeed their incredibly rare and hard to find debut Le Chou) there's probably little point in purchasing Young, Dumb & Full Of... If not however, then there's no better time and place to start becoming a convert to Cabbage, the people's band of 2017 in waiting.