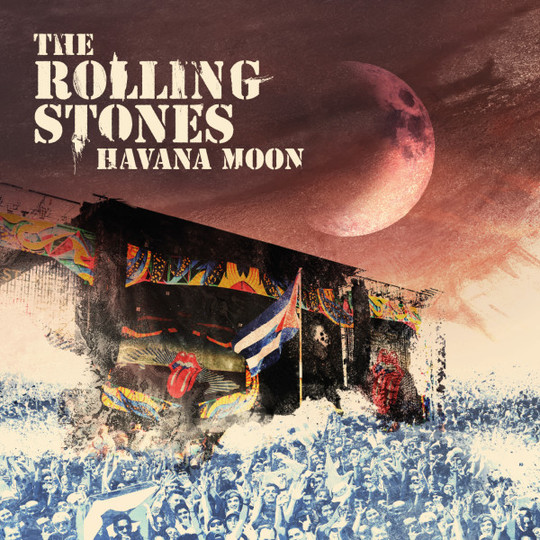 New artists just starting out could do much worse than watch the DVD of The Rolling Stones’ 2016 Cuban concert, Havana Moon, to understand just what performance supremacy looks like. A veritable masterclass in how to be rock stars, The Stones – with an average age of 73 – somehow manage to exhibit more showmanship, style and skill than bands a mere quarter of their years.

Following the visit of President Obama to Cuba in March – the first American president to visit Cuba in 88 years – The Rolling Stones became the first major rock band to play a free concert in Havana, bringing an estimated one million people to the Cuban capital and an estimated 1.2 million to the gig itself at Ciudad Deportiva de la Hatsana. 'It’s just got this weird, romantic aura,' Jagger says of Cuba in the opening credits. 'It was the country that stood up to the United States. And there is still this romantic attraction of people like Fidel and Ché Guevara.'

The band themselves joked earlier this year that Obama was their 'warm up act', before declaring this 'a new time' for Cuba, a place that once banned the music of The Rolling Stones. 'Maybe I’ll stay here forever,' Keith muses on stage. 'Castro’s regime banned rock n roll when it came to power and they’ve never had big shows or anything like that,' Jagger tells us on the opening footage, seemingly still surprised that it’s finally happening after a lifetime of touring the world. With the news of Castro’s passing, perhaps the performance of their biggest ever concert will come to have an even greater historical significance than it already has.

Falling at the end of their América Latina Olé trek, award winning film director Paul Dugdale, who has also documented several of the Stones’ tours previously, begins Havana Moon by capturing the mammoth logistical task of setting up the gig, with over 58 trucks worth of equipment, 500 tonnes of kit and 21 days spent building the set. As the crowd flock to the venue clad in t-shirts and face paint with the famous John Pasche tongue, night falls over Cuba revealing a bright Havana moon and a band just as eager to please as when they made their debut in 1962.

Rather than relentless touring that characterised their concerts in the early Noughties, The Rolling Stones have taken a less-is-more approach in recent years, concentrating on showcasing their phenomenal craft rather than touring mammoth sets. They open with the lively ‘Jumpin’ Jack Flash’, with Jagger strutting up and down the stage clad in showman sparkly jacket, stopping only for his trademark hip shake.

The crowd is a mixture of people screaming, singing or those who are so completely overcome with the emotion a band of only the Stones’ stature can bring that they cry uncontrollably. Imagine having never having a chance to see a rock concert. Imagine the first one you see is then The Rolling Stones. Dugdale does well to capture the emotional crowd who, dream-like, stare in overwhelmed but joyous disbelief at the spectacle in front of them.

‘It’s Only Rock n Roll’ and ‘Tumbling Dice’ follow, as Jagger romances the crowd in his fluent Spanish. Whilst there are indeed plenty of bands and artists from the Sixties and Seventies still around, none of them seem to be able match the continuing energy, passion and skill of The Stones. They’re not just good, they’re incredibly good, and whereas many of their contemporaries voices have, unsurprisingly, failed with age, Jagger’s is still powerfully strong. Likewise, Watt’s drumming never falters, nor does the fluency of Richards and Wood’s guitars. All look to each other on stage, all work perfectly together. Dugdale does well to capture the mechanics of a band who have remained friends for over 50 years.

‘Angie’, played under the beaming moonlight to a captivated, almost silent crowd must surely be one of the most special moments of their career, as will ‘Paint in Black’ and Ronnie Woods' energetic sitar-guitar. Keith Richards taking lead on ‘You got the Silver’ and ‘Before They Make Me Run’ punctuate ‘Honey Tonk Women’ and ‘Midnight Rambler’ well. ‘Give me Shelter’ is typically raw and passionate; Sacha Allan’s incredible vocals complement Jagger’s and the extended version shown on the DVD is indeed a concert highlight. ‘You Can’t Always Get What You Want’, complete with Cuban vocal group Entrevoces, sets up the encore well; ‘I Can’t Get No Satisfaction’ of course closes the show.

Playing on 25th March meant the gig coincided with Good Friday. Back in Rome, the Vatican reportedly expressed their upset at it taking place on such a holy day for Christians. In a 2016 world characterised by so much division, the fact one iconic band brought over a million people together in a moment of joy and celebration might be a better point for religious consciousness to concentrate on.

How apt then, that Mick Jagger decides to don a grandiloquent red and black feather-clad cape for ‘Sympathy for the Devil’, 'wiggling his arse', as Charlie Watts puts it, to the gleeful crowd. Jagger’s only care seemed to not be about politics or religion, but about giving a crowd who hasn’t seen a rock concert under Castro’s rule the best time of their lives. Dugdale has captured perfectly the mood and tone of a concert that will surely prove one of the most important in musical history.