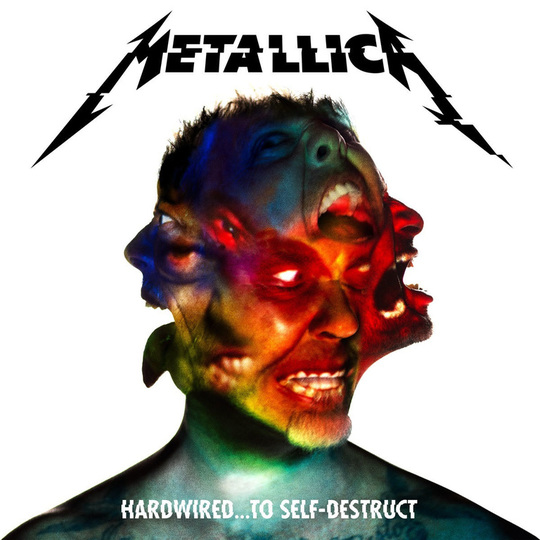 It is hard to get excited about the idea of a new Metallica album nowadays, and I write those words as someone who grew up with Ride the Lightning, Master of Puppets and … And Justice for All on near constant repeat for at least a couple of years. Death Magnetic was just so ordinary, and Lulu so head-scratchingly abysmal (to the point that I’m still not entirely sure it wasn’t just a tremendous prank) that I may not even have listened to Hardwired… had I not been assigned the task of reviewing it.

Actually though, despite my scepticism, if you can ignore the truly appalling cover art (no mean feat), Hardwired… gets off to a pretty solid start. ‘Hardwired’ is a short, sharp start (barely scraping past the three minute mark). It doesn’t kick down any new doors, but it’s a solid thrash opener in classic Metallica style and, crucially, unlike some of the better songs on Death Magnetic, it doesn’t overstay its welcome. ‘Atlas, Rise!’ is similarly promising, although it doesn’t quite make the most of the potential given by its opening riff. ‘Now That We’re Dead’ isn’t a bad effort either, even if it does occasionally sound like an Alice in Chains chorus in search of the rest of a song. ‘Moth into Flame’, meanwhile, is actually genuinely enjoyable. It might even be the best song Metallica have put out in a quarter of a century (although I’m damning it with faint praise here I know).

Unfortunately, that’s sort of it… by track five Hardwired… has already showed off all its tricks, and I find myself quite tempted to show my discontent by going to listen to Slayer instead. ‘Dream No More’ and ‘Halo No Fire’ are fine, but they both sound more like Metallica impersonators rather than the real thing. The second disc (yes, there’s two of the buggers) is just a collection of plodding half-baked riffs. By the time ‘Here Comes Revenge’ comes along (nine tracks in) things are getting painfully tedious. “I’ve been here since dawn of time”, Hetfield sings. Tell me about it mate.

What becomes most apparent, as the album’s second half wears on, is that there really are aspects of Metallica’s modern day songwriting that continue to be completely baffling. For example there’s the regular failure to integrate Kirk Hammett’s guitar solos in a way that adds to – rather than detracts from – the flow of the song. There’s the odd success on that front here (‘Moth into Flame’ in particular), but too often it feels like we’re just being treated to some generic whammy bar wailing because… well, that’s a thing Metallica do. As on a few occasions on Death Magnetic we are given the impression that Hammett spends his entire life in separate room, soloing away, so that the band can cut and paste random patches of fret wankery in whenever they feel like it.

Then there’s the production. How is it possible for a band like Metallica, with all the resources they have at their disposal, to end up sounding so incredibly weedy? The best tracks here succeed in spite of, rather than in any way because of, the production job. It’s not compressed to hell like Death Magnetic was, but it does sound alarmingly digital in some places. The guitar tone throughout is pathetically beige, lacking any of the bite that made Metallica’s Eighties material so immediately invigorating. As for the low end… well, there isn’t any (not that there has been any on a Metallica LP since 1988), but whereas this has been forgivable on occasions in Metallica’s past, with this guitar tone it just makes the whole thing sound pathetically thin. ‘Am I Savage?’ answers its titular question by being just about the worst offender of the bunch in this department… until next track ‘Murder One’ takes the biscuit by having less punch than a baby hamster.

Oh, and in case you hadn’t guessed by the fact this album is 80-odd minutes long, Metallica still need to GET A FUCKING EDITOR!

It’s indicative of what feels like a band still in the same autopilot mode they wheeled out eight years ago. From the reaction Hardwired… is getting in many early reviews, one would think that Death Magnetic was poorly received upon first release. It wasn’t, and attained plenty of glowing reviews, and it’s only in recent years that it’s seemingly been reinterpreted as a disappointment. It was, like this record, only anything worth sticking on because it wasn’t Load, Reload, St Anger or – god forbid – Lulu. Neither record, released by any other band in the world, would get any attention or special praise: they would both just be accepted for being what they are, distinctly unremarkable and unthreatening quasi-thrash albums.

Then again, is there anything particularly wrong with this state of affairs? The idea of Metallica returning to their Eighties highs in 2016 is, ultimately, faintly ludicrous. Nobody in the universe needs the new Metallica album to be anything more than a respectable excuse for the band to keep touring the world. This is a band that released three great (and two very good) albums back in the day because they were in a rare groove of songwriting form. More importantly, perhaps, they were in a truly enviable position in some critical ways. The Eighties presented them with the opportunity to define a whole subgenre, and then the Black Album came along at the right time to enable the band to reinvent the mainstream position of heavy metal in a global way.

There’s no evolutionary musical slipstream, or zeitgeist, for Metallica to fall into now. Metal has moved on, the world has moved on. They’re just bunch of ageing guys that lost their touch through an avalanche of drink, drugs and success in the early Nineties. Metallica now exists purely as a service to the millions of fans worldwide (oh, and to earn its members more money, of course). I’m not convinced there’s anything desperately wrong with that. I wouldn’t bet against one day finding myself once more in a field, alongside thousands of others, raising a pint in the air as ‘The Ecstasy of Gold’ announces Metallica’s imminent arrival on stage. I’ll probably head back to the bar during most of the Hardwired… to Self Destruct cuts though.