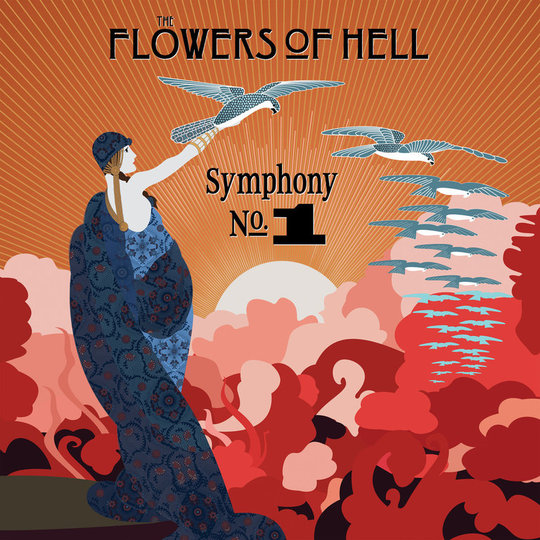 Given the array of top names often linked to the transatlantic orchestral rock group Flowers of Hell, it’s more than a little surprising that this ever-rotating collective of musicians hasn’t garnered more attention. Their output has included contributions from the likes of Spacemen 3’s Peter ‘Sonic Boom’ Kember and Will Caruthers, Spiritualised’s Rick Dickaty, Death in Vegas’s Tim Holmes and Owen Pallet to name but a few. They were even endorsed by Lou Reed. Regardless, their impact always seemed to be a little less than the sum of their parts. Following on from the mixed effort that was Odes - predominantly a covers record - Symphony No#1 could change that.

Band leader Greg Jarvis had it in mind to write a symphony, but initially lacked the confidence as he is unable to read or write music. A chance encounter with the late Malcom McLaren emboldened him to go ahead with the project, and the seeds of Symphony No#1 were sown. Jarvis invited soprano Danie Friesen into the fold, and gathered some of the many Flowers of Hell regulars, including British Sea Power’s Abi Fry, for his most ambitious record to date.

Jarvis has a condition called synesthesia, which causes him to see sounds as abstract visuals. Symphony No#1’s trajectory is indicative of the approach he takes to the shape of his music on account of this condition: the record takes a wave like course, rising and falling, ebbing and flowing. The peaks are felt with the three ‘Aria 51’ movements that hinge on Friesen’s soaring soprano, and sweep the record skyward flanked by shimmering cymbals, reaching strings and reeds. They are undoubtedly the most breathless, beautiful and moving moments on the record.

It is however, a record that is sometimes dizzying in its shifts in tone space and mood, and Jarvis is well aware that what comes up must inevitably come down again. The woozy barroom jazz of ‘Movement 2: Sketches of Space’ smashes the euphoria of the Arias. The tone is also shifted in the aptly titled ‘Movement 4: Darkness,’ whose echoed vocal is haunting. Although this record veers more towards the group’s orchestral/classical leanings, there are still plenty of the post rock characteristics that have seen them aligned with the likes of the Velvet Underground and Spacemen 3, as ‘Movement 3: Shades and Shapes B’s’ waves of guitar feedback will attest. And ‘Movement 3: Heligen' ponderous pace hints at their shoegaze inclinations.

In many respects this is a timely release for Flowers of Hell given the current musical climate that seems to be more open to cross discipline work. On the flip side it also means they have some stiff competition, not least with records like Jóhann Jóhannsson’s Orphée. There are moments that don’t quite hit the mark, and themes that are sometimes too often revisited. That said, it remains a quietly bold work that is possibly the collective’s most satisfying to date, and most certainly their most emotionally rewarding. Jarvis may not be able to read or write music, but this hasn’t prevented him and his cohorts from creating a really quite beautiful record.