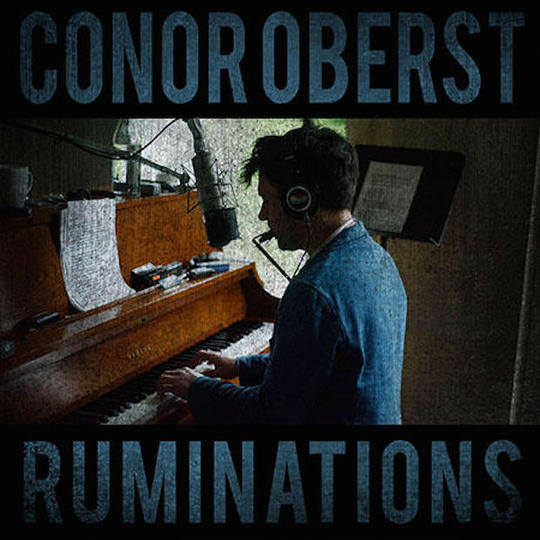 Late last year Conor Oberst was hospitalised while on tour with Desaparecidos owing to laryngitis, anxiety and exhaustion. What should have been a victory lap for the band and their tremendous reunion album was promptly curtailed, and Oberst returned to Omaha to recuperate. It later emerged that the singer had a cyst on his brain as well as inordinately high blood pressure. These details are relayed in a Vulture interview, which I’m fairly sure is the first time Oberst has spoken about being falsely accused of rape by a fan and the ensuing chaos his life was plunged into.

I read the interview after having listened to Ruminations a number of times, and it bears out and magnifies the fact that this stark set of songs is the result of a particularly challenging period for the singer. Recorded quickly last winter during that period of convalescence in Omaha, the melancholy that infuses proceedings can sometimes feel oppressive. Loss in its many forms shades Ruminations, and the matter-of-fact nature of its acceptance makes the record all the more devastating.

Performed entirely on the piano, harmonica and acoustic guitar, Oberst decided that once the songs were down they were done, and the occasional flub, sharp intake of breath or mishit ivories that register as a result of this decision are entirely in keeping with the album’s approach. It opens with ‘Tachycardia’, which despite its self-explanatory subject matter (also taking in recurring nightmares, severe anxiety and self-medication) manages to end on a note of wonder, buoyed by a sprightly piano line. It is a fantastic song, like most of those here, not least the sad, pretty, pretty sad ‘You All Loved Him Once’, which ostensibly concerns the fate of Julius Caesar but works as a treatise on hero worship and backlash culture in general. It’s a subject that Oberst’s recent experience of being demonised on the internet no doubt played into, whether consciously or not.

Loss is felt explicitly on ‘A Little Uncanny’, which, following a caustic verse on the rise of Ronald Reagan, raises a glass to Christopher Hitchens, Oliver Sacks, Robin Williams and Sylvia Plath, and the affecting ‘Mamah Borthwick (A Sketch)’ is named for the most famous victim of a brutal mass-murder. The song is a hazy contemplation on the enduring influence of her partner Frank Lloyd Wright’s architecture and the commitment inherent in creating anything that lasts, in which Oberst’s voice just about holds.

‘Next of Kin’, meanwhile, with its gentle ascending chord progression, comes off a pensive echo of ‘Thunder Road’, but where that song was a wide-eyed celebration of possibility amid a broken American Dream, Oberst here focuses on grief, endings and innocence long left behind. In the Springsteen classic cars signify freedom and escape from drudgery; ‘Next of Kin’ opens on a fatal crash.

Ruminations is one of a clutch of recent albums that grapple with anxiety and depression (something that, coincidentally, the Boss himself has been been commendably forthright about lately, too). The reconfigured Okkervil River’s superb Away finds Will Sheff confronting disillusionment with the music industry and grief over the loss of his grandfather over dreamy, autumnal arrangements, and panic attacks suffered by Justin Vernon led to the elliptical, often stunning 22, A Million. Unlike those records, Oberst’s is a simple affair. Its stripped-back songs are fragile things. Scattered with references to New York City (Oberst’s base for 13 years), historical and contemporary figures and dark bars where time shifts and “the world just melts away,” they paint an absorbing portrait of ennui and vulnerability.

What stops the album being a total downer is the acumen of Oberst’s observation, the melodies that are clear and strong yet brittle at the same time, and, more than anything else, the empathy that tempers these songs. The closing ‘Till St. Dymphna Kicks Us Out’ exemplifies all these things, as its protagonist wrestles with the weight of all that’s irrevocably lost and attempts to find solace through a night out drinking in Manhattan’s East Village. A short-term solution if ever there was one, the emphasis here is on friendship and connection. “Sometimes it’s the simple things that make it all okay,” the narrator assures the song’s subject, and later: “If you want a confidant, I’d never let you down / And we can keep drinking till St. Dymphna kicks us out.”

Ruminations put me in mind of a review of Oberst’s 2008 self-titled album (or perhaps the following year’s Outer South) I read in the sadly departed The Word magazine. It was a positive write-up, honing in on either ‘Milk Thistle’ or ‘White Shoes’ as an example of Oberst at his sparse, unadorned best, and expressing the wish that the singer would sooner or later get around to making “his acoustic masterpiece.” This record may or may not eventually claim that title, but for the moment all that matters is that it’s a beautiful collection of songs; one where sadness is allayed by companionship, and doubt by laudable compassion.