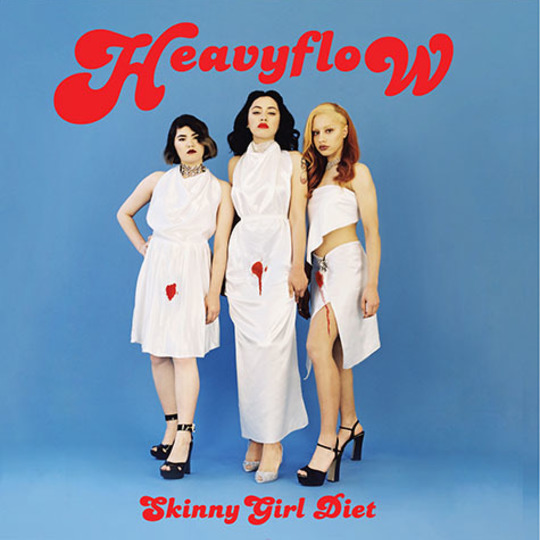 Skinny Girl Diet are an all-WOC hyper-femme feminist diy-heavy grunge band who appear on the cover of their debut album Heavy Flow in period-stained white dresses. If I hadn’t been waiting for this album for about two years now, I’d love them before hearing them play a single note. Their EPs and singles for the years leading up it have been nothing short of grungy, punky heaven - all heavy, angry distortion and low fi production and lyrics sneering and angry by turns.

While they’ve retained that ultra low fi sense of rebellion, Heavy Flow is so much more than more of the same. With a middle finger up to simple album structures with singular arcs, Skinny Girl Diet audibly experiment here with all the sounds they can be. Alongside their heretofore signature heavy girl-grunge sound, third track ‘Okay’ is a slacker grunge-pop song so on the nose it borders on parody, marrying jarringly comforting lyrics with strolling major chords, throwing in a couple deliberately sloppy harmonies near the end as if gently laughing at anyone who might’ve taken the song in earnest. Meanwhile, ‘Bored’ and ‘Wolf Pack’ are heavy even by their standards, featuring literal screams, piercingly high and fiercely feminine, affirming triumphantly the revolutionary potential they contain within their very existence and their every action. And penultimate track ‘Wasted Smile’ spends half its time as a mournful acoustic number, its sorrow constantly uncomfortable as the clashing harmonies refuse to let the listener settle into it, while the rest of it is made up of frantic punk.

There’s rebellion in their lyrics too of course, most directly in ‘Pretty Song’, with lead singer Delilah Holliday drawling “Women in the world are beauti-”, words seemingly so drenched in sarcasm she’s unable to finish the word. Later, on ‘Silver Spoons’, she snarls of “Police corruption causing government disruption”. There’s personal lyrics here too though, as on ‘Forget’, she spits “You’re a piece of shit, you’re a piece of…” repeatedly, while on ‘Fix Me’ she pleads “I need you to fix me, it’s all I’ve ever wanted...you’re acting like an animal”. There’s revolution here too, as Holliday sings of her life and experience because they matter.

From the songs you never expected to the song you did, Heavy Flow is consistently musically interesting too, with riffs and melodies often based around dark chromatic and minor ideas punctuated by the triumphantly dismissive major chords of ‘Forget’ and the plaintive major sevens of ‘Fix Me’. The chord changes in single ‘Yeti’ and typical SGD song ‘Eyes That Paralyse’ are meanwhile dizzyingly chromatic, with barely a melody to grab onto. The clashing harmonies on tracks like the equally chromatic and yet somehow wonderfully hooky ‘DMT’ are a stroke of genius - every time their sound approaches something accessible, they sabotage it. The album it comes together to form is thus as intriguing for a music geek as it is affirming for a disenfranchised young woman, and if you happen to be both, it’s totally fucking wonderful.