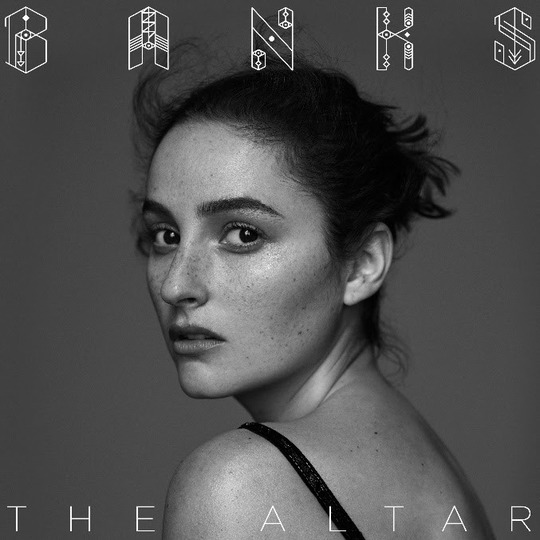 To say Jillian Rose Banks – known to most of the world as Banks – and her debut LP Goddess were one of the most pleasant surprises of 2014 would be disingenuous, if only because fans had already had time to digest her style by then. Alse, Banks’ subject matter is rarely ever pleasant, an aspect of her music she takes pride in. Hype has surrounded the 28-year-old’s career ever since her EPs Fall Over and London introduced the world to a wholly confident songstress who came of age under the influence of similarly bold acts like TLC and Aaliyah. Goddess brought her full arsenal to the table, a pop singer delving deep into the worlds of R&B, hip-hop, and plenty of eclectic synths. But most importantly, Banks proved to be one of the most personal, vulnerable artists of today, with no topic off limits. On The Altar there are no dramatic creative overhauls, aside from the darker tones, but that proves to be a good thing.

If anything, she is even more unfiltered and tenacious on The Altar than she was on Goddess, again exploring all the nuanced aspects of relationships past and present. She is able to simultaneously sound sensitive and heartless. For good comfort, Banks brings along Goddess alumni Tim Anderson and Al Shux, two musician/producers who each have worked with the likes of Alicia Keys, Lykke Li, Lana Del Rey, and Best Coast. For those new to Banks, the single 'Fuck with Myself' is a perfect introduction, with her confidently singing “I fuck with myself more than anybody else” like only a genuine bad-ass could do. It is this confidence, applied to her songwriting that exudes itself all over The Altar.

The most intriguing aspect of Banks is her naked introspection. All the tracks are like confessionals or musical diary entries - ones that have an added layer of authenticity to them. On 'Love Sick' she convincingly aches and yearns for love, affection, and “time in the sheets” over minimal instrumentation. “Trainwreck” finds her even more self-deprecating, partly blaming herself for a relationship gone awry. But Banks is hardly stuck in the victim role, as many songs feature her spoonfeeding hard doses of perspective and truth down her ex-lovers’ throats. On 'Weaker Girl' she taunts a former love interest, saying he should look for a weaker girl rather than a “bad motherfucker” like she claims to be. Rather than stick to one gimmicky disposition in all her material, Banks presents a holistic view of her innermost thoughts and feelings.

Banks’ appeal doesn’t rely solely on her vocal range. She has a keen ear for production, and in most instances, the more experimentation, the better. 'Judas' has a late-Nineties R&B feel, with choppy drums, synths that populate the chorus, and sultry vocals that bear resemblance to T-Boz of TLC. Here Banks equates the hurtful treatment of a one-time lover to being stabbed in the back, yet maintains a cocksure attitude all the while. She sounds more vulnerable on 'Haunt', where the image of an ex-lover that she still pines for is haunting her with his image. On 'Poltergeist' looped background vocals evoke an ominous scene, perfect for Banks’ mystifying vocals.

'27 Hours' marks The Altar’s finale, where a buildup of soft piano strokes leads to a rush of bombastic synths. Although Banks blames herself for a relationship gone sour, she deserves kudos for her performance throughout the album. Taking genres and moulding them to her liking, Banks proves that she is not a typical songstress. Her music is refreshing for an industry full of uninspired performances by artists who copy whatever Top 40 radio is dishing out. Banks is perfectly comfortable in her own skin and artistic abilities, and it shows immensely on The Altar. Hopefully as with Goddess, there will be a full album of remixes and bonus material on the way.