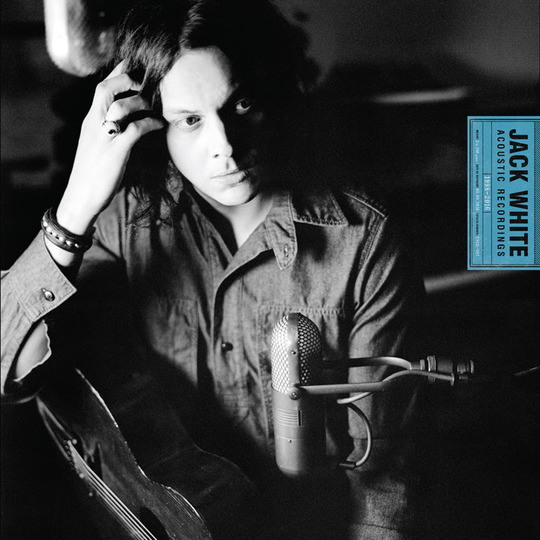 With names like Kanye, Beyonce and Taylor Swift occupying the top of music charts and the front pages of tabloid newspapers, the music industry has come to resemble the old Hollywood star system with its fierce individualism, strictly defined media agendas and public images crafted to a T. In this world, Jack White is a vague, uncategorisable anomaly.

His new collection of acoustic recordings covers a considerable chunk of time: a whole 18 years, during which he moved through different musical projects and styles (The White Stripes, The Raconteurs, solo work), but when presented as a whole, this anthology feels oddly scattered, elusively concealing any recurring patterns or trajectories.

It is punctuated by some strong accents throughout, true. There’s a very distinct blues presence which White himself has frequently affirmed, hailing Son House’s ‘Grinning in Your Face’ his all-time favourite. There are also quite a few folky little ditties presented in Western saloon piano or fiddle-fuelled glory. What makes it all unique, though, is White’s much-favoured genre and context mixing, i.e., a standard, smoky bluegrass chord progression will always be accompanied by some dirty garage rock drums or a screeching, out of tune guitar solo – a technique that defined the sound of The White Stripes and kicked off a definite trend (remember that highly publicised, awkward beef White had with The Black Keys?); or an innocent, lullaby-like melody such as ‘White Moon’ will be paired with some grimly adult lyrics: "My friends are all dying, and death can't be lying".

But before you notice any sound, lyrics, music influences, stylisation or any other of that finicky stuff, the thing that will strike you on an immediate, instinctual level first is White’s omnipresent voice. This extensive collection features the many vocal modes of the musician, morphing seamlessly into whatever the context of the song requires, like a vocal WD-40.

First, although scarce on this collection, there’s the classic White Stripes rock’n’roll deity mode with the angsty, high-pitched screams that are his main calling card. Then, there’s the weird, loud, agitated talking-rapping mode that in a funny way sounds like Beastie Boys (‘Carolina Drama’, ‘Machine Gun Silhouette’); next up, there’s the sexy, raspy, Mark Lanegan-like goodness (‘Just One Drink’) that’s rooted in country and cowboys, and finally, my favourite: the vulnerably quiet, imperfect mumbling that sometimes makes it impossible to distinguish the lyrics.

The higher and quieter White goes, the more uneven and shakier his vocals get - very much like Jeff Buckley in that aspect - and that’s where he is at his best. I don’t know whether it’s the illusion of complete artistic nakedness or a purer, more genuine sound of it that gets me, but it is these quiet moments of imperfection that reveal White as something more than a story-maker, a bluesman wannabe, a patchwork of numerous contrived little narratives, but a real person with real feelings who sings about real things, e.g., ‘You’ve Got Her in Your Pocket’ or ‘Never Far Away’.

Speaking of patchworks of narratives, this LP is also a true celebration of White’s love for creating his own mythology and making up stories. The songs are little self-contained vignettes about various characters and their journeys, resembling campfire or drinking songs. Some are really bland and instantly forgettable, others – really poetic and imaginative, such as the chilling murder ballad ‘Carolina Drama’ or ‘Effect and Cause’ about getting back at a shifty lover.

This compilation of standalone narrative slices reflects White’s own penchant for making up stories about himself and feeding the press all sorts of fun lies, like the one about him and Meg White being siblings. All of this, however, ultimately leaves his real personality shrouded in mystery and his work feel detached and at times artificial. It puts a huge emphasis on the story, the sound, the stylisation, but White’s true heart and soul are always buried somewhere deep beneath all the layers of mythology, exercise in genre and trying on different roles for size. And, perhaps, that’s why I always cling to the delicate, minimal ballads that – even if falsely – reveal some sort of infantile naivety behind all the meticulous craftsmanship.

I guess White’s flexible approach to genre mixing and his fluid adoption of different music modes and roles is what makes him such a frequent collaborator for a wide array of artists as well as earned him the admiration of a very diverse audience. While it most likely means nothing of the sort, a short line from ‘Hotel Yorba’ is what I imagine White’s ultimate true hidden desire to be: "I’m tired of acting tough, and I'll do what I'll like".