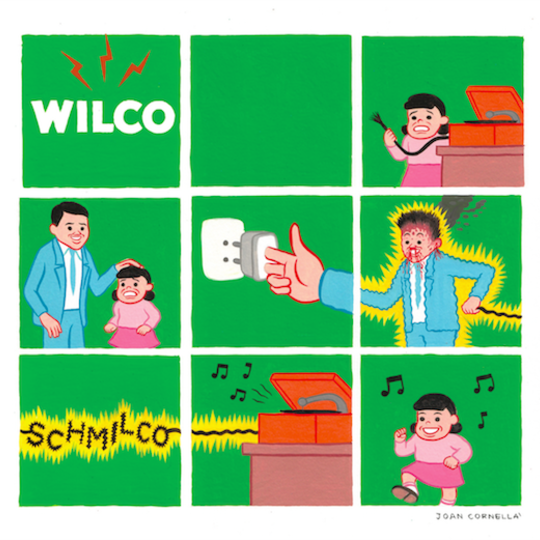 This might well be an apocryphal memory on my part, because I can’t find the recording of it anywhere, but some years back, at a Wilco show, Jeff Tweedy received a marriage proposal from a member of the audience. After pointing out that he has been married with a family for several years now, the notoriously wry frontman added something along the lines of: 'You wouldn’t want to be married to me anyway. I just sit around in my pants, farting and playing guitar' (hey, my hero is just like me after all!).

It is a rare thing for a press blurb to be either (a) interesting or (b) revealing, let alone both as is the case here. 'Schmilco bears neither the vicious, fuzz-glam guitars of Star Wars, nor the dazzling, baroque-ish arrangements that fans have come to expect,' it informs me. It is an album 'that might feel welcome after 20-some years of enjoyed but now-familiar Wilco releases. It is an intentionally loose affair.

Largely acoustic it is. Nels Cline, that wonderful guitar god who makes a Jazzmaster sound like an orgasm in a way that makes you feel inadequate both as a musician and a lover, is relegated largely to lap-steel here. His noodling is nice and all, but it’s akin to casting Jason Statham in an ITV period drama. Worse still is the treatment of Mike Jorgensen, who has such an instantly recognisable sound on the keyboard; I genuinely don’t know if he is even on this record. Some nice fluttery percussion on ‘Quarters’ aside, the brilliant Glenn Kotche barely is.

It isn’t all bad. The aforementioned ‘Quarters’ transitions beautifully into a softly plucked acoustic guitar outro that’s as soothing as anything Tweedy has ever written and this is by no means the only moment of loveliness. ‘Cry All Day’ rolls along like the mistral; if ‘Spiders (Kidsmoke)’ had a beloved childhood stuffed toy it would be this. It’s by far and away the best thing here. And credit has to be given for ‘Nope’ (it’s a toss-up whether this or the album itself has the more annoying title) for belatedly, and all too briefly, introducing some crunching electric guitars.

But only ‘Cry All Day’ threatens to save this half-arsed Jeff Tweedy vanity project – and there are nine more songs after it. The first, ‘Common Sense’, is a staccato mess; the last, ‘Just Say Goodbye’, is an aptly named drip that doesn’t need to be wet given there is nothing to extinguish. ‘We Aren’t the World (Safety Girl)’ is somehow more cloying than ‘We are the World’. Fucking hell, Wilco.

We’ve had '20-some years of enjoyed but now-familiar Wilco releases.' Bollocks have we. Being There and Summer Teeth still sound fresh and amazing. Yankee Hotel Foxtrot is one of the greatest albums ever made and still sounds timeless. The Whole Love and Star Wars sounded like a band reinvigorated after a couple of (earned) albums of perhaps coasting slightly. The latter of these was a cracker, came out barely a year ago and I still have the vinyl on heavy rotation.

Later this year I’m off to see Wilco at Brixton Academy. Why on earth they think an album of lazy off-cuts (and the Alpha Mike Foxtrot boxset proved they can even do those better than they have this time) is either prime material for playing at that kind of venue or even needs releasing as a new album at all, is beyond me. Sky Blue Sky: you’re no longer the worst Wilco album.