One Day All of This Won't Matter Anymore 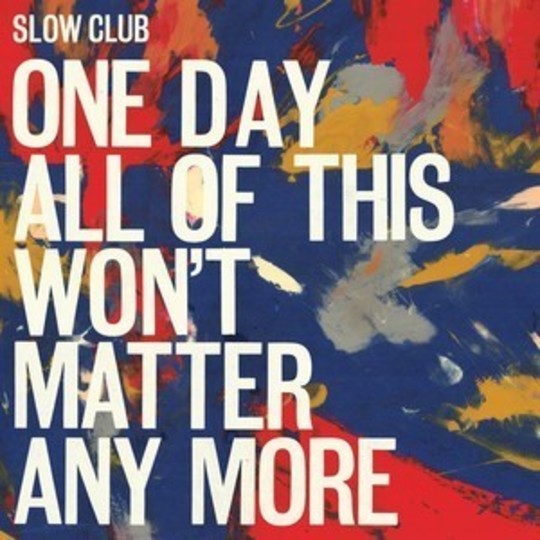 The early singles which defined Slow Club’s reputation were kind of red herrings. Listen to something like ‘Giving Up On Love’, and you’d think that Slow Club were basically a power-pop duo – peppy beats, high tempos, and sugar-rush boy-girl vocals. But this song was a bit of an anomaly. The most consistent undercurrent of Slow Club’s music – across four albums now – has been traditional blues and country influences, and it’s never been more in the foreground than it’s been on One Day None Of This Will Matter Any More.

This is a much more languid and relaxed album than its predecessor. Complete Surrender heightened the glamour of their sound; slathering arrangements in classy string sections and soulful vocal takes. One Day… sounds like it's set at sunset, with subtle shuffles of texture underpinning restrained, careful melodies.

Opening track ‘When The Light Gets Lost’ sets the tone perfectly: a partly whispered chorus hook giving way to a wandering, bluesy guitar run; gospel singers swimming in towards the song’s close, building to a gentle glow rather than a huge climax. Of course, produced by Matthew E. White and recorded with his house band, this is basically how you might expect this record to sound, and it’s captured perfectly.

Slow Club wear the album’s mood well, and its consistent feel gives the whole record a lovely cohesion, but there are some drawbacks to the approach. Firstly, almost by definition, there aren’t really any particularly big set pieces across the album. As a lead single, the lazy drift of something like ‘Ancient Rolling Sea’ probably hasn’t set as many pulses racing as the invigorating drama of the last album’s title track. Not a problem in itself, of course, but for those waiting for Slow Club to make the leap for truly crossover pop-superstardom will have to wait at least one more album.

Beyond that, the measured vocal takes have displaced some of the more playful interactions between Charles Watson and Rebecca Taylor. Put simply, there’s aren’t many moments when it feels like they really sing together. Instead, they take their turns to take the lead, relegating each other to subtle backing support. We do get some truly impressive, sweeping vocal turns – such as the back half of ‘Come On Poet’ or the gospel swell of ‘Give Me Some Peace’ – but it does slightly diminish one of the core dynamics which made Slow Club so charming in the first place.

These are small complaints compared to the highs of something like new single ‘In Waves’. Working to a totally traditional Americana blueprint, the song eschews flash and innovation for the pleasures of a simple song performed well. The melody is lived in, welcoming and exquisitely sung. Meanwhile, at the song’s close, Alan Parker's solo manages to be equally modest, even as he absolutely plays the hell out of his guitar. And this is the defining feature of the album at large. It’s never showy, it’s never flashy, but by completely embracing the blues and country at their core, it’s always as good as Slow Club have ever been.