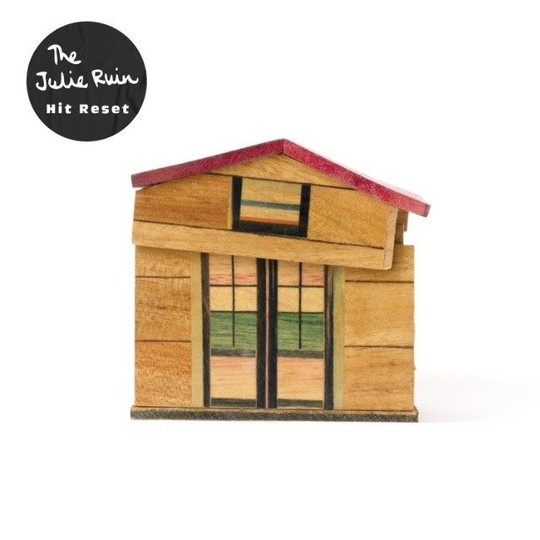 Kathleen Hanna has a talent for hitting very specific nerves that sometimes make you laugh and sometimes make you cry but always give you that sense of your heart being filled, and your soul being lifted. Musically diverse – not just from band to band but from album to album – her deeply personal thus naturally political lyrics and visceral vocals are a thread that holds them together. Second album Hit Reset with her most recent band The Julie Ruin is just about as personal-political as it gets – exactly where Kathleen sits most comfortably.

Starting as it means to go on, the title track opens the album with an upbeat pop song. A couple of bars of catchy drums, then in comes the music (kinda like this ). As usual - perhaps now more than ever in fact - it’d be a mistake to assume the upbeat music will reflect the album thematically; though it will have its lighter moments later, Hit Reset is mostly anything but. It’s an album about Hanna's survival of the abuse she suffered in childhood, and in all its complexity and anguish, and right from this statement-of-intent opener it’s wrought with emotional pain: “At least I made it out at fucking all / It’s a tightrope that I walk”. Not every track is an accessible cry-while-you’re-dancing song though; ‘Hit Reset’ is followed by insistent, militant, urgent ‘I Decide’, which then leads into all over the place ‘Be Nice’, manic in its sadness. The constant changes of pace ensure that this is a record you’re never allowed to settle into. And just in case you were in danger of forgetting how achingly sad the album is, at the end of the the string of triumphant, empowering pop songs that make up most of the second half of the album comes ‘Calverton’, a harrowing ode to Kathleen’s mother. Hanna has spoken in interviews about how her mother couldn’t save her or herself from the abuse of her husband, so instead secretly empowered her daughter to save herself, just as the stark acoustic piano ballad ‘Calverton’ ends “You made me think that I could fly” like an on-switch for your tear ducts.

Just as the harrowing parts of the album fill you with sorrow, so the lighter moments fill you with genuine joy. ‘Planet You’ and ‘Mr So-And-So’ are packed with glorious put-downs of narcissistic men and men who fetishise feminists, respectively. 'Hello Trust No-One' and ‘I'm Done' both see Kathleen putting down abusive men who prey on women they see as vulnerable, but also acknowledging the process of her growth and making the decision to leave them in the past. 'Hello Trust No-One' also contains hilariously hyperbolic brags like “I can play electric guitar / While shaving my legs in a moving car”, a spot-on parody of how various media portrays her as well as an absurd assertion of self-esteem.

Practically every moment of Hit Reset feels as important as it is brilliant. With the possible exception of 'Time Is Up' (a perfectly good song, just not up to the standard of the rest of the album), it feels damn near flawless.