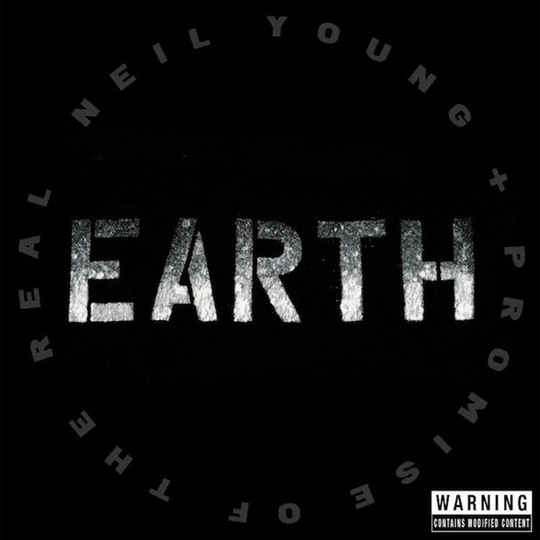 Sat in the pub little more than a week ago with a friend and fellow Drowned in Sound hack, I was struck by jealousy. He was crashing at mine before an early flight out to Denmark for the Roskilde festival (and has probably by now filed his review before your tardy critic): 'Neil Young has got a two-hour slot,' he told me. Smug bastard, I thought. 'Well a quarter of that will probably be "Love and Only Love"' I snarked back, recalling a Ragged Glory-heavy set the only time I’d seen Young, at Hyde Park two years ago.

Little more than a week later here I am reviewing Earth, the old grump’s latest addition to a live album catalogue now eight strong. And yes, it closes with ‘Love and Only Love’: 28 minutes of it.

It would be easy to dismiss Earth as an inessential bit of discography filler and this near-triple-length rendition of ‘Love and Only Love’ demonstrates why it is so tempting to do so. It is important to bear in mind, though, that this is not a ‘normal’ live album. It is filled with overdubs, of zoo noises (think Ross’s keyboard in Friends) and choirs, while Young’s voice appears to have been tweaked in post-production. All of this feels wholly unnecessary and all feature on the closer; once the guitar jams die out with 18 minutes in, it comes across as enormously indulgent to have the overdubbed choir chant the song’s title for a almost ten further minutes. To add insult to that, the sound of a cheering crowd – who, let’s not forget, didn’t hear half of that – draws the album to a close.

Yes, at 98 minutes the length of the album does make it a challenge, especially given that Young largely eschews the hits. We are treated to a gorgeous rendition of ‘After the Gold Rush’, happily back on the piano after an anaemic experiment with an acoustic guitar version in 2014, but other than that the track list is drawn mostly from Ragged Glory and his excellent latest album, The Monsanto Years. Highlights are drawn from some of his lesser-known albums: ‘Western Hero’ from 1994’s underrated Sleeps with Angels and ‘Vampire Blues’ from critics/fans’ favourite On the Beach. At the other end of the scale, ‘Human Highway’ opens with chicken noises straight out of Arrested Development, but (a) there is enough good stuff on here to sustain the album and (b) test of endurance it may be but what did you expect when you bought a live Neil Young album?

‘Inessential’ is the wrong word to describe Earth. After all, this is the first official recording of Young on stage with his latest band, Promise of the Real featuring Willie Nelson’s sons Lukas and Micah, who hold up well here. However with the unnecessary augmentations serving as a distraction rather than enhancements, this is something of a missed opportunity.