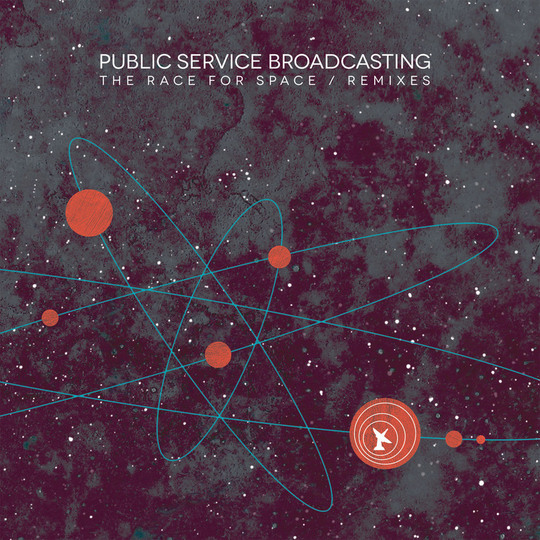 Albums of remixes or reimaginations of tracks featured on albums which have already found some success always strike me as a tricky business. Difficult to make into coherent freestanding collections and with the complex additional burden of remaining faithful enough to the original source material to be recognisable on the one hand, yet worth listening to in their own right on the other. So it is with this collection of remixes for the The Race For Space, last year's spellbinding statement from Public Service Broadcasting. With the original source material being as cinematic and wildly creative as it was, it seemed before pressing play on this album that, in a sense, remixing or re-imagining it was superfluous.

Happily, as with most things in life, I couldn't be more wrong. It's a good job too for the band, whose J Willgoose Esq (what a name that is) states 'Even back when I was still writing this album, I was imagining the kind of remixes we could get and the artists who we'd ask.' An interesting outlook this. Perhaps it's a sign of just how far above the level of mere musical mortality Public Service Broadcasting operate that such a singular vision, which would appear nothing short of pretentious in the hands of lesser artists, can be so thrillingly brought to fruition.

Eight of the original album’s nine songs are given new treatments here at least once. ‘E.V.A’, ‘Sputnik’, ‘Korolev’ and ‘Go’ appear twice. So, for instance, we get to compare and contrast the overdriven bass of Vessels' version of ‘E.V.A’, an entirely suitable dance floor-banger of an opener, with its interpretation by the ever-fascinating Dutch Uncles. In this version, an early section redolent of Max Richter’s work on the soundtrack to the Leftovers gives way to a driving midsection which feels like it might have fitted on a mid-period Michael Jackson album. Honestly, it does. Kauf’s take on ‘Go’ appears to feature only the merest hint of the original source, a pulsing bass here, a synth lead there, only becoming truly recognisable as an offshoot in its final minute, whilst Errors focus on the interplay of the synths which made the original so forceful much more strongly. Field Music’s ‘Korolev’ is as quirky as you might expect from that wonderful band, whilst its Robert Babiscz-helmed counterpart is a much more strident and insistent affair, all driving krautrock and swirling synths. This, I suppose, is indicative of the strength of the writing of the original album. So nuanced, so layered, that it fires off in those who hear it and seek to build upon it music which would sit comfortably in multiple genres and be enjoyed by listeners of massively diverse tastes.

It’s interesting that, for all this, the standout of the whole collection is Psychemagik’s take on ‘Gagarin’, a piece which leans heavily on the synth lead so integral to the original throughout, even as it is morphing it and thunderously pulsing around it. This is the version to carry this song beyond radio airwaves and into the ears, hearts and minds of clubbers the world over. It is probably the only track here which truly leaves that on which it is based in the shade. Majestic in scope and execution, this is simply a glorious piece of music.

Whether this collection of 12 new versions, five of which have been heard before, works as a coherent album is open to debate. There can be no denying, however, that all of them honour the vision of The Race for Space in its original form. It is to the credit of Public Service Broadcasting that they can attract such an imaginative and varied crowd of collaborators to partnership with them. More than this, as the final notes of ‘Sputnik’ fade into the ether, it is to the original album that I long to return, to delve deeper and further into its dizzying universe.