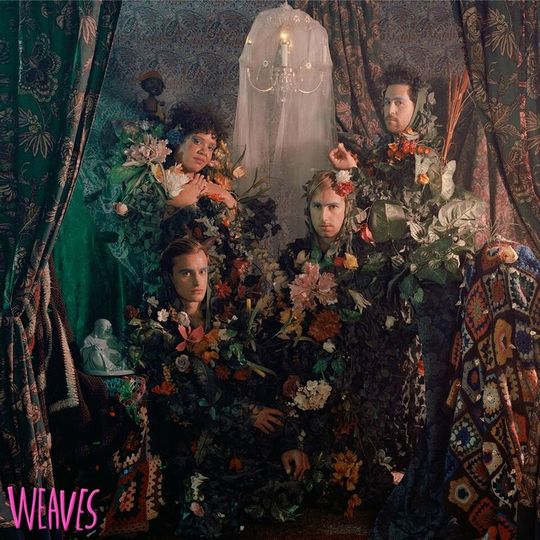 Picture, if you will, a band that lands somewhere between Pixies and Pavement. But then also sound something a bit like Tune Yards (fuck their ‘quirky’ stylisation) crossed with Talking Heads. And then imagine if that lot had a bastard child with Blur and the B-52s’ own bastard child. Then imagine they included a song that was faintly reminiscent of the Beach Boys monstrosity that was ‘Kokomo’.

The unfathomable, unholy and directionless mess that is the above paragraph is deliberate: Toronto’s Weaves sound vaguely like all of the above, but only if you’re really pushing to hear it. Weaves have thrown everything into their self-titled debut but, after three years together, seem pretty well wedded to the idea that more is definitely better.

There is no doubt that Weaves is the sound of a band having fun and enjoying themselves at being weird. And by several accounts they put on a hell of a live show – like the album energetic, enthusiastic and powered by raw gleeful energy, with singer Jasmyn Burke making for a charismatic frontwoman. ““I remember turning 15 and thinking life’s not right / I’m living in a shithole not holding no one’s hand” she sings on ‘Shithole’ with a nice sense of levity.

It’s something of a shame, then, that listening to the record is a far less enjoyable experience. Burke is, sad to say, part of the problem here: if she can actually sing then she disguises it well. There is nothing inherently wrong with being atonal – I’m a fan of The Fall, after all – but her off-key vocals jar here. Much of the album, the likes of opener ‘Tick’, ‘Candy’, ‘Coo Coo’ and ‘One More’, is whimsical pop rock built around clever polyrhythms but, to misquote Eric Morcambe, if Burke is singing the right notes then they’re definitely in the wrong order if not on the wrong songs. Perhaps the worst offender is ‘Eagle’, a song so twee it probably has its own Tumblr about Taylor Swift’s boyfriends, with its ill-advised freestyle “oohs”.

Musically Weaves is a hodgepodge. It opens with surf-pop synths that later give way to meaty, big and bouncy bass lines and bright colours shooting from guitar lines that slip and slide all over the place. On ‘Two Oceans’, with its squalling guitars, this could again be punkish if the whole thing wasn’t so lightweight; there is no anger here, only discordant noise. Later on, ‘Coo Coo’ brings in the steel drums and you have flashbacks to Mike Love’s greatest crime against music.

There might be a good band lurking within Weaves. They just need to decide what exactly they are.