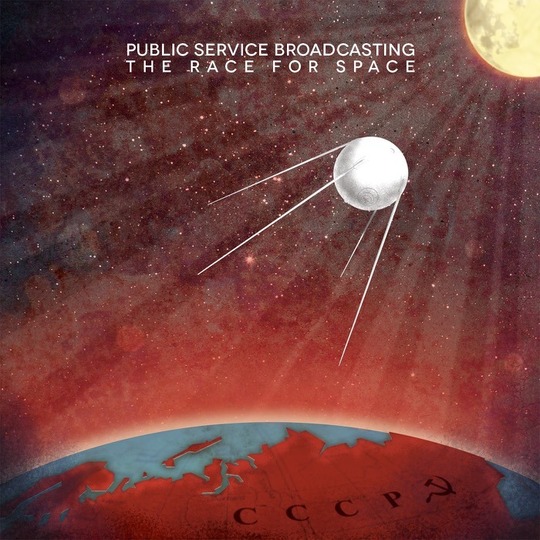 Every so often someone has an idea so brilliant you hate them a little bit, because you didn’t think of it yourself. Public Service Broadcasting are one of those ideas. The London duo make sprightly electronica and choppy funk rock based around samples from old public information films, cine-footage and radio broadcasts. It could be dismissed as novelty if it wasn’t done so well, as evidenced by the magnificent ‘London Can Take It’, the atmospheric Blitz-themed track which first got them noticed back in 2012. The following year's Inform - Educate - Entertain album showed that while they might be a one trick pony, that trick was so bloody good you’d happily sit through it any number of times. Still, there was always the suspicion that a second album might be pushing it.

Which is where PSB, damn them, have hit on another brilliant idea you wish you’d thought of. Loosening the 'public service' angle, the duo have themed their second record, The Race for Space, around the Cold-War-driven mania for space travel in the late Sixties, utilising material culled from the radio transmissions of the actual Apollo missions alongside contemporary newsreels and wireless broadcasts from the BFI’s archive. The result is consistently fascinating and occasionally completely enchanting.

John F Kennedy’s famous “we choose to go to the moon” speech begins a chronological journey through the key beats in the titular dash into orbit: Sputnik, Yuri Gagarin, the tragic deaths of the Apollo 1 crew, the first space walk, the first woman in space, Apollo 8’s manned lunar orbit, and of course Apollo 11’s “eagle has landed”. The source material is immaculately curated, and there’s a strong sense of the historical narrative- we feel the importance of these events, and we follow the story easily. That’s not an album though, that’s a radio documentary. There is nothing so nerdy here, nothing so dry. The Race for Space’s great strength isn’t in smart use of samples- after all Sixties news readers, and the calm, measured tones of NASA operatives hardly paint the most emotive of pictures. The real story is told through the music, and that’s what elevates Public Service Broadcasting way out of the novelty dangerzone. Make no bones about it, this is a beautiful record, which tells a story of ambition, tragedy and triumph using a palette of vintage electronica, swelling strings, ethereal voices and some properly funky drumming.

The joy here is in how the duo marry theme and function. It sounds trite, but you could honestly take the samples out and there’d still be an emotional story to tell. There’s JFK’s voice ghosting over an angelic choir nestling just on the right side of Monty Python, there’s the beeping signal of the pioneering “Russian moon” built into the loping, housy rhythm of ‘Sputnik’; there’s ‘E.V.A’s’ portrayal of Alexey Leonov’s first spacewalk through quietly disorientating switches in timing and mood, breaking from excitement and speed to a gentle drifting. ‘Fire in the Cockpit’ abandons strong rhythms in favour of faint cellos and static supporting news reports presented without editing, underlining the stark tragedy of the Apollo One deaths, while ‘Go’ rejoices in the sheer speed and excitement of the first manned moon landings, confident and playful, and ‘Gagarin’ marks the first man to ever leave the planet with some seriously celebratory funk. In a showing of real confidence ‘Valentina’ drops the archive gimmick altogether to give the first woman in space a voice away from the propagandising Soviet media via the ethereal voices of ‘dream pop’ duo Smoke Fairies.

Best of all is ‘The Other Side’, which uses radio transmissions from NASA’s mission control to trace Apollo 8’s journey as the first manned craft to orbit the moon. A Kraftwerk-inspired electronic bed swells and jitters before dropping away as the crew pass out of radio contact. It’s cinematic and beautiful and, genuinely, when it bounds back into life and that rickety shuttle, constructed by a race who’d only discovered the aeroplane fifty years before, achieves lunar orbit while a calm voice informs them “there’s a cheer in the room” it will make you actually cry – history and melody and wonder hitting you all at once in a moment of complete joy and release. Just wonderful.