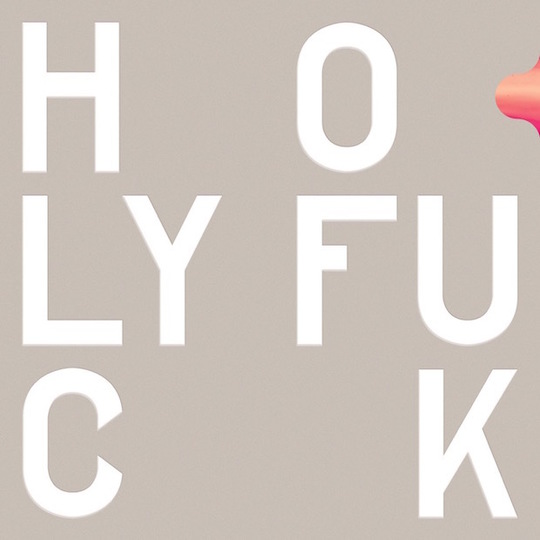 Back in 2006, I saw Holy Fuck play an on-first support show to the then-gargantuan Sunshine Underground at Leeds Uni. I’d heard HF’s first, self-titled record released a year before, and been captivated by their penchant for jamming battered old electronic equipment through guitar pedals over a driving krautrock rhythm section. The gig was short, but great, and I even snagged a t-shirt, which I accidentally wore to a job interview once. Anyway, the point is I’d kinda forgotten all about Holy Fuck.

The band, based around core members Brian Borcherdt and Graham Walsh, released two albums up until 2007, disappeared for three years, popped another one out, then went awol again. Their second record, just called LP, refined their more jazzier moments, steadily filing down the loose jam wigouts that made their first album so expansive and head-fucky, into more manageable chunks. Not that that was a bad thing, but y’know, I do love nine-minute-jazz-fused wigouts. Then nothing much happened until 2010’s Latin, which flew so far under the radar, I had to do an 'oh yeah, I thought that was them' moment whilst perusing their discogs in preparation for this.

So fast forward six (!) years, and here we have Congrats, a record which sees them perfectly, finally, in balance between their jazzy, wiggy madness, and their strangely melodic sensibilities. Thank (Holy) Fuck for that.

Opener ‘Chimes Broken’ is actually a pretty good way to introduce them as a whole, and to welcome back weary travellers into their fried sonic world of distorted, gnarly basslines, hyperactive drum kit workouts and soaring drones floating over the top of the chaos. So, hello Holy Fuck, my my how I’ve missed you.

It’s not all unabashed chaos though, as there’s a creeping subtlety to their sound, which seeps into the carefully constructed ‘Tom Tom’, which feels like a noir-y night drive kind of thing - all churned atmospherics and slow motion, pulsating rhythms. There’s also a distant, barely there vocal, processed through delays and ping pongs around the slowly-melting sonic landscape.

‘Shivering’ and the brilliantly-titled ’Neon Dad’ show another, more mature side to their sound too, with the former sounding not unlike Luke Abbott’s woozy arpeggiators and melancholic synth washes, and the latter coming on like a long-lost Foals demo, back before they didn’t take themselves so seriously. It’s a perfect nugget of alt-pop sun bleached brilliance, which for a band like this, is the perfect curveball - it totally fits, but really shouldn’t, if you catch my drift.

Elsewhere, blistering lead single ‘Xed Eyes’, and the jaunty, almost (almost) reggae feel to ‘Acidic’ shows the band can still bring the fun and kick out the jams, with both aptly demonstrating why they were hot property in the mid 00’s punk funk/ DFA/ weirdo New Yoik scene. James Murphy would kill for ‘Xed Eyes’ by the way - for all his bluster, he could never let go into such unfettered joy the way Holy Fuck do here.

Things get a little dark and musty with the one-two punch of ‘House Of Glass’ and ‘Sabbatics’, both swapping the euphoric glee for a more heads-down, apocalypse groove affair with angry, swirling bass and trudging drums. And then… and then you get ‘Crapture’, which is Holy Fuck does Underworld - a 100mph headfirst dive into off kilter, distorted techno, all bludgeoning, warped melody and relentless kick drums. There’s even time for a whirly, Chemical Brothers style trippy synth line at the end, just to cap things off right.

It’s good to have you back, Holy Fuck, and it’s a relief to say that the six year wait for Congrats is most definitely worth it. For all their weirdo mangled machine noise, it feels like they’ve reached a beautiful plateau - a perfect crossroads between all their disparate elements, finely tuned and full of vigour.

Let The Record Show: Dexys Do Irish and Country Soul