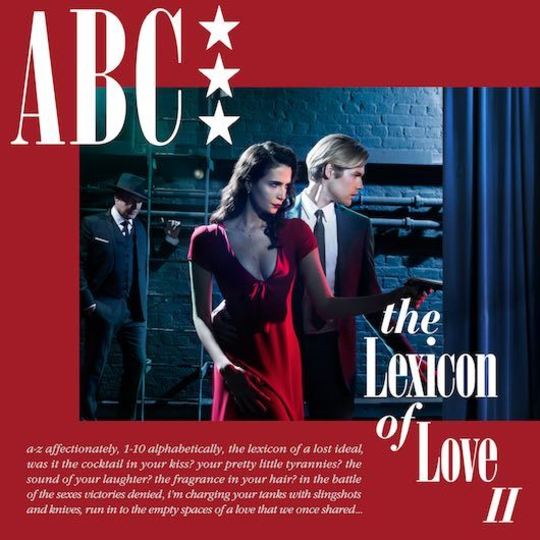 If there is an award for the Unexpected, Belated, Not-Hugely-Anticipated Sequel of the Year (and if there isn’t, there’s an idea for you, DiS editors) then the runaway favourite, Independence Day: Resurgence can suck it.

It would be a stretch to say that ABC are back, given that the lineup now comprises Martin Fry alone. Nevertheless, here 'they' are with the first album bearing their moniker since 2008’s non-charting, albeit decent-enough, Traffic. In fact the band, in all its forms, has had little by way of commercial success or critical attention since announcing itself 34 years ago with one of the finest albums both of its decade and its genre. Who can blame Fry, therefore, for revisiting The Lexicon of Love?

To their/his credit, ABC/Fry have done a reasonable job with The Lexicon of Love II: Love Harder. Academy Award-winning film composer Anne Dudley is back on board, as she was the first time around, and it can be argued that she plays as big a part as Fry in the album’s success, such that it is. The Stopfordian singer is now 58 years old and it would be churlish to expect him to capture the youthful lovestruck energy of (what I guess we now have to call) volume one but this is a solid, reflective and regret-drenched slice of new wave that sounds, if not as fresh as the original masterpiece, then impressively undated.

Dudley was the first BBC Concert Orchestra's Composer in Association and her background in film and television shines through her. Her orchestration adds a dramatic, cinematic touch on the likes of ‘Viva Love’ and ‘Kiss Me Goodbye’. While it’s true that moments like these recall an album that came out in 1982, they also serve as a reminder of just how essential and invigorating The Lexicon of Love was.

While Part II is broadly a success, it is a qualified one. Lines often come across as clunky and trite: “Somewhere in the chorus, somewhere in the verse/things get better...” and you probably don’t need me to finish that line for you. Elsewhere, ‘Ten Below Zero’ is painfully schmaltzy and the only song that sounds truly dated. It sounds like a synth version of a song from a direct-to-VHS Disney movie in both instrumentation and lyrics: “Temperatures rising, it’s hard to ignore/It’s not surprising there’s snowflakes in my room/It’s summer outside, yet we’re blown apart/It’s ten below zero here in my heart”.

It might be the worst song of the year so far, but ‘Ten Below Zero’ stands out purely because it is so far below the level of everything around it, like Nick Compton in the England batting line-up. Coming in at four (both in terms of track number and in keeping with the cricket analogy) is the slightly mournful, yet gorgeous and lush ‘Confessions of a Fool’. Again the lyrics are slightly awkward but, along with the opening two tracks and the Roxy Music-esque ‘Kiss Me Goodbye’ see Fry at his effortless best.