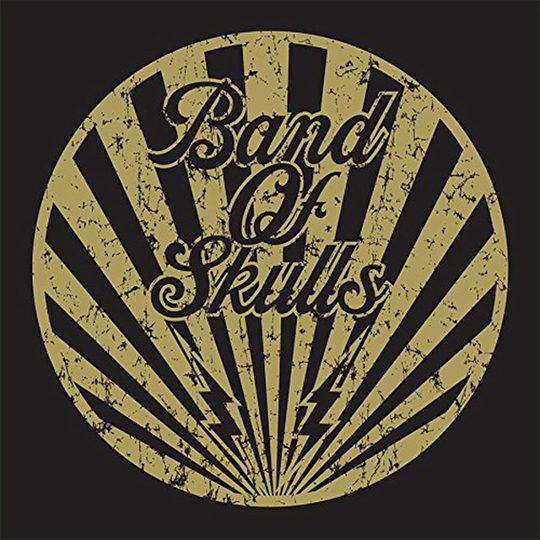 According to the press release, Band of Skulls see this album as the start of 'a new era' for them. They still sound very much like themselves though, with the addition of a few synths and with everything that makes up Band of Skulls kicked up a notch. It’s definitely a development, but not exactly the 'tightrope thing' they seem to think it is. Maybe these things sounded riskier in their heads?

After the unnecessarily long drum intro of ‘Black Magic’ (the first of several too-long intros on the album), it becomes immediately clear that By Default is simply the logical next step for the Black-Keys-ripoffs. It’s that delicate combination of laddy, blokey and dudey that’s gratingly dull at best, off-putting before they’ve even done anything specifically wrong. At worst though, it’s rather more sinister. The whole album is littered with lyrics like “Don’t play so innocent” (‘Black Magic’), “Seems you protest too much” (‘Killer’) and, even in harmless-sounding borderline-corny ‘Back Of Beyond’, “You say you won’t but oh yes you will”. These lyrics are more than just tiresome clichés, they epitomise the harmful sentiments that create the culture that makes women feel unsafe. ‘Black Magic’ feels especially creepy, selling its female subject (or rather object) the illusion of agency in a prison of male gaze.

Not everything on By Default is misogynistic, mind, it’s just that when the lyrics aren’t threatening or creepy, they make fuck all sense. It shouldn’t come as a huge surprise, I suppose that a band who’ve named themselves 'Band of Skulls' (seriously. what.) aren’t very good at putting words together, but it doesn’t make lines like “Bang your head on the bottom of the ocean” at the end of ‘This Is My Fix’ any less funny. Single ‘Killer’ is a particular highlight for this: the imagery in of “bleachers” and “windmills” - y’know, like in that film with the bleachers next to the windmills - are really odd choices of clichés to deploy at all, let alone together, and they don’t seem to quite know what “atone” means.

The worst part is, though, they’re annoyingly good at ladrock. Apart from occasional cringey bits, like the riff in ‘Tropical Disease’, the guitar solo in ‘Embers’, and the middle eight of title track ‘In Love By Default’, the music on By Default totally works for their target market. They’re expert at varying the dynamics of their music, and their riffs are strong and self-assured. Band of Skulls know how to make a ladrock hit, and By Default is littered with them. And given that these tend to be the ones with the creepiest lyrics, they’re the ones whose future ubiquity in clubs I’m most afraid of.