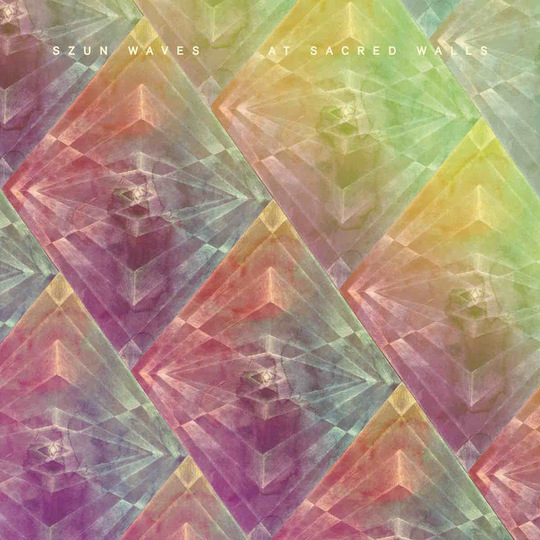 The prospect of Szun Waves, a project combining the herculean talents of Luke Abbott, Laurence Pike (PVT) and Jack Wyllie of Portico at first feels a little too good to be true. The amalgam of three such extravagantly gifted individuals ran the risk of being something of a vanity project. That the trio would be able to harness the power and scope all three possess into something cohesive and more than the sum of its parts seemed unlikely. How would it possibly work? How would the processed instrumentation of Abbott's work fare alongside the freewheeling saxophone of Wyllie's work with Portico, or Abbott's layered and sensitive percussion work, both with PVT and in free-jazz collaborations with Mike Nock and elsewhere? If this came off, it could be one of the most exciting releases of the year. If it didn't, it could be a crushing, noodling disappointment.

'Further', the gradually unravelling epic opening track on At Sacred Walls, the debut album from Szun Waves is a mere few seconds in, and already all fears and doubts have been assuaged. A combination of some trademark understated synth work from Abbott and some distant, choked saxophone from Wyllie has us captivated from the earliest moments. As the track enters its foreboding third minute, and even if you are unaware that there are still around nine to go, you know that something special is happening here. As the gentle, almost playful, acoustic drums enter the fray for the first time and something approaching a groove is settled upon, it becomes gorgeously possible to lose yourself in what Szun Waves have to offer. Like the calmest of Portico Quartet's output, but with the additional layers of drums linked to midi triggers and the sax processed through layers of electronics, this is dense yet comfortable free-jazz of the highest order. Things build steadily, but not to the cliched climax of cacophony. Rather, as Pike adds further and more complex inflexions to his rhythms and Abbott and Wyllie combining melodically, the effect is devastating, revelatory. Things eventually come apart on a welter of chordal synth, but 'Further' is one of the most impressive and potent opening gambits on any album released this year.

And it only gets better from there. The title track lopes along, driven by a drum part which shows the full extent of Pike's mastery of his instrument as a full part of the ensemble, rather than simply as an accompaniment. It is a taut composition, lacking the looseness and freedom of 'Further'. In turn, this is followed by the aptly named 'Adrift' which returns things to their original feeling of balance and composure.

'Orb Light' is the album's most 'far-out' moment. It's challenging to tell where Abbott ends and Wyllie begins on this one. The track feels the most free and improvised of any of the six on show here. It's less formed and structured, seemingly a much more emotive and exploratory moment as a result. 'Through the Voids' continues the journey into space, largely devoid of a rhythmic base right up until the song's closing moments. It comes across as the potential soundtrack to the kind of space documentary no-one admits to watching but everyone secretly loves. Calm returns on closing track 'Trouble Burning', a really beautiful climax to a really pleasant record. Here, the three members of Szun Waves are in perfect synchronisation. Although it is expressed in a loose sense, each take a turn solo-ing, before returning into the whole to play their part in a sumptuously atmospheric piece.

Yes, it's difficult. Yes, it's potentially less accessible than the primary vehicles that any of them are known for, but At Sacred Walls is a fantastic record which rewards concentrated listening and consumption as a whole. It may even be the best thing any of these musicians have put their name to.