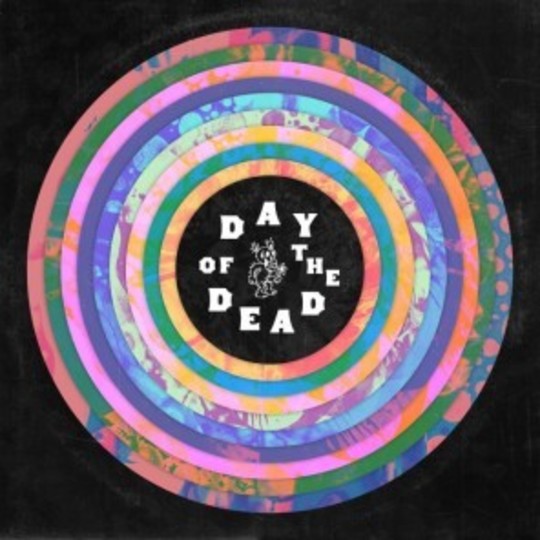 It’s not easy being a Deadhead in 2016. The Grateful Dead pushed a huge number of boundaries as they toured relentlessly across four decades, simultaneously carving out new forms of psychedelia and Americana - but then again they could also straight up suck, and Deadhead status is at times a hard to shoulder (let alone explain) burden. So the release of Day of the Dead is hugely welcome. Across five (yes FIVE) fully-packed CDs, it’s an all-encompassing and level-headed tribute to the Dead’s multifaceted back catalogue, featuring covers, plus a handful of new compositions, from dozens of contemporary artists. The sweet sits alongside the sour, the good nestles up with the bad, and plentiful genius shares space with inexcusable stupidity. The project seemingly began as something of a Dead-themed followup to the Brothers Dessner’s Dark Was the Night compilation, also for US-based AIDS and HIV charity the Red Hot Organisation. However, the opportunity to cover the Dead, along with the band’s fiftieth anniversary, seems to have lit a proverbial fire under the project and sent it spiralling somewhat out of control, amassing 59 specially recorded songs totalling some six hours of music. Towards the end of the booklet assisting the release is a brief essay by Red Hot’s co-founder John Carlin, where he describes the band’s approach to 'free love and recreational drug use', going on to explain how 'in retrospect some aspects of that behaviour has sexist overtones and showed the disparity among the Dead’s largely white middle class audience'. Aptly for an AIDS charity compilation, the back page contains the words 'PLAY SAFE' written in Hitchhiker’s Guide style ‘large, friendly letters’. Ultimately, the compilation indeed has many a moment that’s perhaps somewhat too safe, countered by many that are clearly utterly spellbinding, Deadhead or not.

The lion’s share of the songs come from Jerry Garcia’s fruitful partnership with lyricist Robert Hunter, spawning a string of Americana-tinged classics from the first half of the Seventies. Despite being easily the Dead’s strongest original songs, the Garcia-Hunter catalogue is responsible for several of the least exciting reinterpretations here. Phosphorescent’s cover of ‘Sugaree’ is the second track on the releases, and swaps out the original’s gradually unfurling groove into a painfully cheesy country shuffle, while Bruce Hornsby and DeYarmond Edison’s intensely syrupy re-reading of ‘Black Muddy River’ feels much too skippable, and The Lone Bellows’ version of ‘Dire Wolf’ is so straightforward as to render itself unnecessary. Mumford & Sons were somehow brought on board too, and they do the unthinkable and butcher one of the Dead’s most beloved tunes, ‘Friend of the Devil’, recasting it as charmless photofit Radio 2 pop. Then again, several of the more straightforward covers are completely wonderful when done right. Bonnie ‘Prince’ Billy helms an aptly noodly run through of ‘Bird Song’, while gothic ballad ‘Loser’ is perfectly delivered in its rightful lethargic country form by Grizzly Bear’s Ed Droste and Little Joy’s Binki Shapiro sharing lead vocals.

The breadth of styles on display throughout the compilation is its greatest strength, and also allows some of the songs to seemingly realise their true selves in their new interpretation. Although it’s far from Adam Granduciel’s finest vocal performance (or perhaps he’s doing an impression of the vastly overweight and often strung out Eighties Jerry Garcia, who went from owning a beautiful elfin voice to singing like a particularly untalented tramp on a cold day), having The War on Drugs play the Dead’s latter day US chart hit ‘Touch of Grey’ is a stroke of pure genius. The song explodes to life as a propulsive modern indie track, as does Local Natives’ version of ‘Stella Blue’. A reinterpretation the Dead’s post-1974 disco sound by American banjo player Béla Fleck is another massive highlight. Fleck, assisted by vocalist Oliver Wood and none other than India’s greatest living tabla player (and former collaborator with the Dead’s second drummer Mickey Hart) Zakir Hussain, loses none of the funk and hook-heavy noodling deployed by the Dead on ‘Help on the Way’ - all the while rearranging it for banjo, bass, and tabla.

And then there’s the two epic suites, buried deep in the sprawling compilation, and paying heed to the Dead’s loftier aspirations. The epochal cosmic jam ‘Dark Star’ appears in various avatars, as an instrumental jam, a digital deconstruction (by Grateful Dead hater, Tim Hecker, in tribute to John Oswald’s infamous rework of the same song), and a pair of covers, one of which is by The Flaming Lips. The grandiose ‘Terrapin Station’ however, truly takes the concept of a cover to insane new heights. The song was already the somewhat divisive and overblown finale to the Dead’s 1977 album of the same name, seeing them jettison jamming and songsmithery for a 16-minute suite that delved into the complexity of prog, cheesy synths, and symphonic music. Here, an assembled cast record a fully fledged version of the epic, including full orchestra and choir, and a new passage for percussion composed by Bryce Dessner. Daniel Rossen sits in for Jerry Garcia’s voice, and it’s perhaps the most uncanny embodiment of the man’s magical and all too underrated vocal presence to date. Perhaps I’m projecting, as both Rossen and Christopher Bear from Grizzly Bear are present, but the suite seemingly takes on the spiralling emotional grandeur of Grizzly Bear’s Veckatimest. The re-recording of ‘Terrapin Station’ is a really magnificent achievement, arguably outdoing the Dead’s own recording of their most complex ever composition.

The Dead’s earliest and most energetic youthful period, as a twangy blues- and R&B-obsessed young band in San Francisco in the mid-Sixties is poorly represented on the record. Only Fucked Up acknowledge the era, with a simmering version of ‘Cream Puff War’ from the Dead’s 1967 self-titled debut. There’s just so much on offer throughout this monumental record, that it seems obtuse to complain about what’s missing, but a bit more of that early acid and blues material wouldn’t go amiss. What’s more, as far as this record’s concerned the group’s ill-fated early member Ron 'Pigpen' McKernan didn’t even exist (many of you will probably think it’s all the better for it, but the Grateful Dead story without Pigpen is incomplete, dammit!)

Inevitably one can barely scratch the surface in a few hundred words on such a massive compilation as this. We’ve not even mentioned Stephen Malkmus & the Jicks' swaggering version of the ‘China Cat Sunflower > I Know You Rider’ pairing, or The National’s haunting rendition of ‘Morning Dew’, or Ira Kaplan (of Yo La Tengo) working showstopping magic on soaring nocturnal ballad, ‘Wharf Rat’. The scope of the Dead’s legacy is unfathomable, and the Day of the Dead project tries to take almost all of it on. The songs The Grateful Dead left behind, the many thousands of hours of recordings, the thirst for aimless rambling, the outright acid madness - it’s all here on Day of the Dead. It’s overblown, it’s almost too much to take in, it's got a sizeable chunk of dodgy singing, and it’s way too long - and as such it’s a wonderful tribute to The Grateful Dead, unlikely to ever get topped.