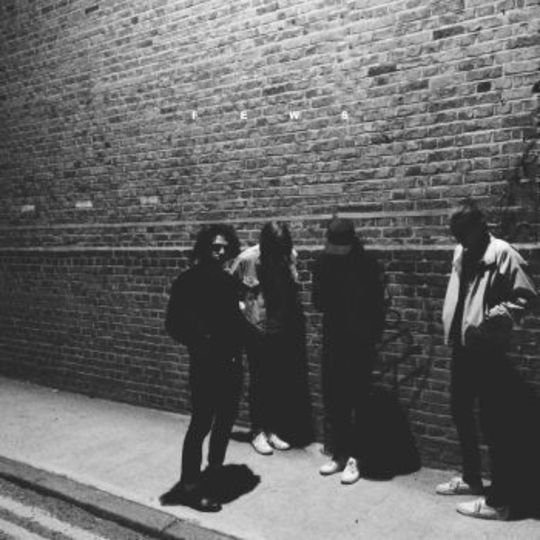 Sometimes a short sharp shock is all that's required to get the adrenalin flowing. Which is just as well because post punk collective Fews have an abundance of them at their disposal. Hailing from all corners of the globe - Sweden, America and new bassist Jay Clifton from the UK - this Malmo based foursome have set pulses racing since second single 'The Zoo' arrived unsuspectingly in the latter part of 2015.

Not that they're strictly new all things told. Singer and guitarist Frederick Rundqvist met fellow guitarist 'Swedish David' Alexander through a mutual love of the same bands via MySpace when said medium was still a thing. Recruiting drummer Rasmus Andersson soon after along with a succession of bass players, the embryonic Fews' first recordings date back to around 2013. Some of those compositions have survived, albeit re-recorded and enhanced somewhat by a confidence enriched from playing more shows and working in the studio with experienced technical genius Dan Carey.

Indeed Carey's input cannot be understated, as he undoubtedly has to be given credit for helping bring Fews' ideas to life. Nevertheless, the songs also have to exist to a certain standard in the first place and Fews prolific nature when it comes to writing meant they had several tough decisions to make when finalising the tracklisting here. However, one can find little to argue about with the ten songs that did make the final cut.

For a band very few people outside of their homeland would have been aware of this time last year, their buzz has accelerated thanks to the band's incendiary live performances. To supplement this, a carefully planned strategy where tracks have only been made available at a steady rate when both band and label were fully satisfied with the results (new bands take note!), building the anticipation levels even further. What this makes for is a debut album containing no filler whatsoever, and a record that mirrors the ferocious intensity of those live shows to boot.

Kicking off with 'I.D.', a brooding two-and-a-half minutes instrumental that recalls Interpol in their preTurn On The Bright Lights phase, Means_ quickly gathers pace at a rate of knots, only occasionally stopping for breath such as on reflective melo-ballad 'Keep On Telling Myself'. It's a relentless surge that's simplistic in structure yet no less effective in delivery.

Early singles 'The Zoo' ("Time is on my side!" declares Rundqvist rather aptly having utilised his and Fews' succinctly) and 'Ill' listeners may be familiar with. The former careers at breakneck speed on a riff that recalls Diiv at their most ferocious; the latter, originally a limited edition release on the Speedy Wunderground label takes the shape of an epic, motoric beat driven psych rock opus that owes as much to the likes of PiL as it does Neu! or Faust.

In between those aforementioned bookends, Means never loses momentum. 'Drinking Games' reverberates and shimmers incandescently while 'The Queen' sees Fews fuse their post punk template with a love song of sorts ("All I want is her, what I want is her"). '10 Things' and 'Zlatan', possibly the oldest two songs on Means dating back to the earliest origins of the band sound fresh and invigorating all the same, the latter a deftly scripted paean to Swedish footballing legend Zlatan Ibrahimovich ("It tears me apart, it breaks my heart").

Elsewhere, recent single '100 Goosebumps' - arguably the weakest track on the album - and 'If Things Go On Like This' keep things flowing admirably which is nothing less than we've come to expect. There may be the odd detractor only too happy to point out the obvious references to other artists here. But as the saying goes, talent borrows whereas genius steals. And while Means is only just the beginning for Fews, their future possibilities are endless.