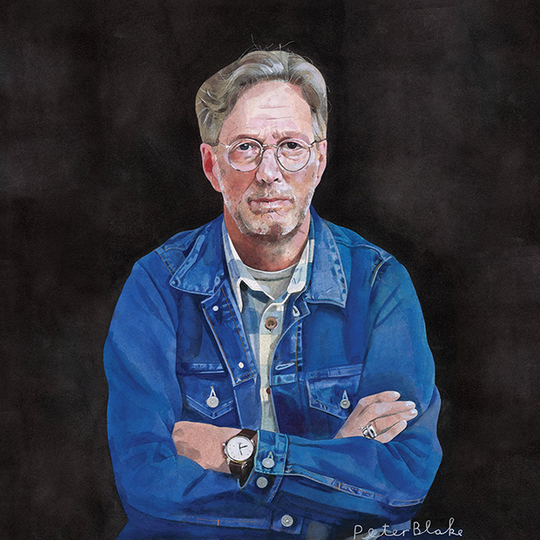 Three years ago I saw Eric Clapton in concert for the first, and probably last, time at his spiritual home, the Royal Albert Hall. I grew up with Clapton, my mum’s hero: 24 Nights and Journeyman were on near-constant rotation in my dad’s car when we went to visit grandma and granddad for Sunday dinner. One of the first songs I tried to learn on the guitar was ‘Bad Love’ ('tried' is the operative word there). I was brought up by parents who taught me conflicting lessons – mum telling me Clapton was the greatest ever to pick up a guitar, dad insisting Jimmy Page was better (it’s clearly David Gilmour, mum and dad).

Looking back at the Eric Clapton of my childhood, it’s clear that a lot of it was shit; heavily overproduced muzak that has aged horribly and often features drum machines or, worse still, Phil Collins. Clapton has recorded and performed a ridiculous amount over his 50+ year career and the sheer volume of his work means he was never going to be samey, but one thing is clear: it’s the dirty, druggy stuff he will always be lauded for. Those riffs that are only cliché because they’re so good, so timeless: ‘Layla’, ‘Sunshine of Your Love’, ‘White Room’, ‘Cocaine’... not to mention how Slowhand could belie his nickname with the white hot fire of the likes of ‘Crossroads’ or make a guitar sound like thunder on ‘Edge of Darkness’. ‘Wonderful Tonight’ is a schmaltzy ballad about Pattie Boyd that sounds best live, with a five-minute soaring guitar solo added on the end.

As the Nineties progressed and turned into the Noughties, Clapton moved further into the world of blues standards and collaborations. His last solo album to feature predominantly original material was 2005’s Back Home. Boogie-woogie piano became more prevalent and the scorching guitar solos less so with age. Then, three years ago at the Royal Albert Hall he took to the stage with three keyboard players and did a set mostly comprising little-known blues numbers. The odd hit was in there – synth-heavy renditions of ‘Sunshine of Your Love’, ‘Crossroads’ and ‘Cocaine’ as well as, unforgivably, the milquetoast acoustic version of ‘Layla’ – but the disappointment was writ large across mine and my girlfriend’s faces: Clapton doesn’t wow you with the instrument he is synonymous with any more.

All of which brings us, in a roundabout way, to I Still Do. According to the press release it is a compilation of – of course – blues covers and new material, although in truth only three of the 12 tracks here are original compositions. The good news is that the Strat does at least get plenty of air time, although on a good half of the songs it just noodles away in the background, augmenting rather than taking a centre stage we can all agree would be well-earned.

These are the album’s weakest moments. ‘Catch the Blues’ sounds like it was on Sting’s 'maybe' pile for Ten Summoner’s Tales but wasn’t quite good enough to make the cut. ‘I Will Be There’ features one 'Angelo Mysterioso'; a name that bears a curious similarity to L'Angelo Mysterioso, a pseudonym used decades ago for guest appearances by Clapton’s old mucker George Harrison. This Mysterioso, providing a vocal duet and acoustic guitar, certainly sounds like Dhani Harrison but the song is far duller than ‘Run So Far’, his dad’s 1989 co-effort with Clapton.

When the electric guitar is front and centre, Clapton deserves credit for the gorgeous tone he gets out of it. He opens with a scuzzy riff on Leroy Carr’s ‘Alabama Woman Blues’ and it serves as something of a statement but, as warm as it sounds, it still fails to thrill. Even at 71 he’s as accomplished as anyone out there, but it’s solid, not spectacular. I could play this and, although that’s not the case throughout, it’s not the last time.

I Still Do is solid, unspectacular blues. Take Clapton’s voice out and this could be one of those Jools Holland collections they promote at weekends on Radio 2. But then Eric Clapton is 71; it’s no surprise he’s coasting.