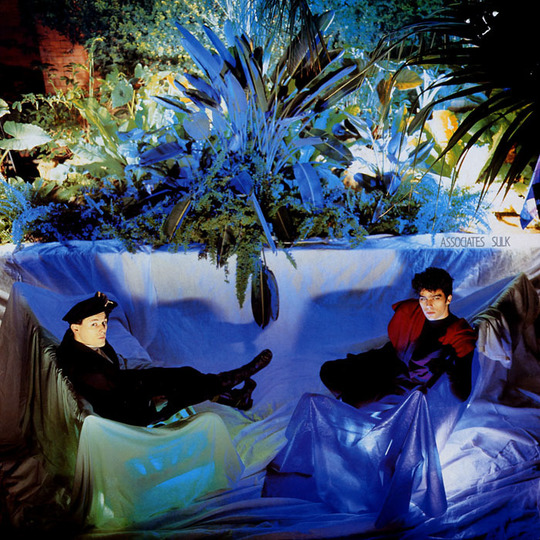 Any music fanatic has those albums that get under the skin. Me being the weird isolated college kid that I was, the unsettling end of the New Romantics really seeped into me – the androgyny, the nightmare images, the seething under a hyper-real glamor far removed from my dorm room. But few really dragged me under like Scottish duo Associates – Billy MacKenzie could leap and bound through enigma and trauma with unbridled ecstasy; Alan Rankine could build high temples of overdubs and scar with riffs like razors. Together, with their combined love of heartstring-tugging film scores and artsy glam pop, they pooled their talents to recreate the atmospheres that hooked listeners in and held them in awe.

Now, I’ve drowned myself in these reissues - the music, the bio-chocked booklets, everything – for over a week, and I realise why I demand so much from everyone else. This is what’s under my skin – this mesh of euphoria and mania, not separated in their respective bins, but fused together in an elegant, thrice-distilled cocktail.

1 – So many ideas, but so little time – The Affectionate Punch introduced the world to the Associates in 1980 at their most nascent form. Rankine hadn’t yet refined his lush layered cake approach to songwriting, but already he had a knack for slicing into perfectly slick glam with razor precision ('The Affectionate Punch') or injecting tension with tight-wound bass lines ('Amused as Always”) – it’s not hard to imagine the duo gigging around with fellow Scots Josef K and the Fire Engines at this time. But while Rankine’s arrangements were still minimal – the cheeky sci-fi ballad 'Transport to Central' sounds especially exposed – count on MacKenzie to build palaces with that unhinged voice of his. Hell, he could even electrify a straight recital of the alphabet (on the joyously jangly 'A').

Before now, the debut only told half the story. When Fiction head honcho Chris Parry first signed Rankine and MacKenzie, he stalled them in the studio to record demos for over a year (turns out he was busy with some other young upstarts, the Cure). This reissue grants us a peek at those sessions, often comprising just MacKenzie, Rankine and an organ beatbox. And yes, they’re actually good – one laments the exclusion of songs like the perky, Sparks-ish 'Double Hipness'. The two demos recorded with then-Cure bassist Michael Dempsey and Simple Minds drummer Mel Gaynor are the crown jewels, as MacKenzie belts through the wham-bam punk of 'Schmoltz'. The remixes at the end could’ve been left out, though – even Rankine admits that his re-recordings of The Affectionate Punch came out botched.

As MacKenzie announced to Melody Maker, 1981 was the year of singles. Granted, the duo were also angling their way out of Fiction and switching to the smaller 4AD imprint Situation 2, which granted more freedom but less cash. Loads of all-night sessions (like 9 pm–9 am) and five singles later, Fourth Drawer Down burbles with some of the Associates’ craziest, sleep-deprived experiments. By now, Rankine had begun his devious overdubbing, and the pair donned a stately, fallen empire
grandeur. 'A White Car in Germany' and 'Q Quarters' echo the simple hypnotism of Kraftwerk and Berlin-era Bowie, but shudder with some of MacKenzie’s blackest, Orwellian lyrics (especially “washing down bodies / seems to me a dead-end chore”, from the latter). The Associates also coaxed bizarre sounds from their instruments – and for that, look no further than the gleefully mad 'Kitchen Person', where marimbas rankle against one beast of a guitar.

Disc 2, the remainder of the B-sides, doesn’t add much to the Associates’ archives – and I hate that this is the only CD without a lyrics sheet - but for those new to the band, you can’t miss the scathing, Siousxie-ish 'Straw Towels'; or their most ridiculous B-side, 'Blue Soap', wherein MacKenzie croons bluesy bars in a tinny voice as water drips around him. What’s new is 'The Tree That Never Sang', which is about as bluntly gothic as the pair ever got. Rankine’s sickened guitars swarm over MacKenzie’s banshee wails, the whole band lends moans to the chorus (this is the only Associates recording where Rankine and the blokes join in) and there’s even some trickles of harpsichord in the intro. Kind of kitschy, but even the duo’s least inspired songs can strike a nerve.


3 – Ohhhh, and then Sulk. Just look at that cover, like a terrace from a subaquatic manor. How does one begin to describe this visceral glory that Rankine and MacKenzie conjured in 1982? Now fully funded by Warners, the pair sought the most decadent production possible, via layers and layers of echo. But with Murphy’s clipped and manic snares, Dempsey’s shadowy bass, and Rankine’s devilish guitar riffs, the Associates evoke the 18th-century definition of the sublime. Through Sulk, mortal terror looks ravishing from a distance.

”Tore my hair out from the roots / Planted them in someone’s garden” - so sings MacKenzie in the arctic wastes of 'No', and it’s arguably the Associates’ loveliest song. Paranoia peaks into mutated forms on 'Bap De La Bap' and especially “Nude Spoons” (oh, how inhuman MacKenzie sounds when he screams "EUPHORIA"). And yet, amidst all this sumptuous horror, single 'Party Fears Two' splits the sky like shafts of light in a stormy sky, even as the radiant MacKenzie muses over acute social anxiety.

Now, the bonus disc to Sulk sounds oversaturated compared to the others – the 12-inch version of 'Club Country' really doesn’t differ much at all from the album cut, for instance. Yet, many of the alternate takes kick the imagination into overdrive. In the far more perverse take of 'It’s Better This Way', MacKenzie tones down his acrobatics to a Robert Smith-like deadpan, and the song’s ultra-bleak bass creeps to the forefront; essentially, it’s the gothic dance party that I always knew it was. Elsewhere, the demo to 'Club Country' eschews almost all the synths, as Rankine unleashes phalanxes of fiery noise to match MacKenzie’s jab at the New Romantic scene. And of course there’s the B-sides, which have been out there since V2’s CD reissue in 2000 – but dear god, no Associates collection could be complete without 'Ulcragyceptinol', with MacKenzie’s most off-the-wall yelps and squeals.


Listening again to these albums – especially Sulk - my words feel woefully inadequate to describe them, like I’m a worm trying to munch on marble. It can’t be done.